A Pardon for Sanjay Dutt

There is no valid argument to let him off 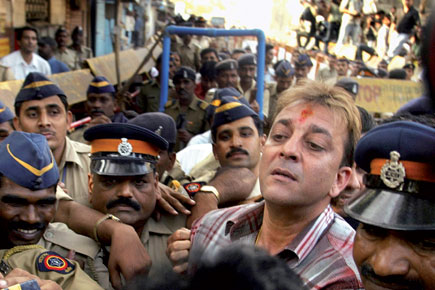 There is no valid argument to let him off


One-hundred-and-thirty minutes on the afternoon of 12 March 1993 changed Mumbai forever. Twelve explosions shook the city in that span, beginning 1.30 pm. At the end of those 130 minutes, 257 people lay dead and 713 injured. For a city that had barely recovered from the communal convulsions caused by the Babri Masjid demolition of 6 December 1992, it was a horrid blow. As the conspiracy of the blasts was bared and the perpetrators identified, Hindu-Muslim tension in Mumbai entered another painful phase, the effects of which can be felt even two decades later. It was not just those who were killed or maimed by the blasts who paid the price, but even some who were not even remotely connected to them. Many have been sufferers of a communal nightmare of someone else’s making.

On 21 March this year, two decades after the serial blasts, the Supreme Court pronounced its final judgment in the case. Of the 100 convicts whose appeals the apex court had heard since 1 November 2011, it has confirmed the death sentence of Yakub Memon and commuted that of 10 others to life imprisonment, while awarding varied sentences to the rest of the accused.

Actor Sanjay Dutt is among those sentenced. The apex court upheld his TADA Court conviction under the country’s Arms Act, ordering him back to prison within a month to spend the rest of his five-year term behind bars, 18 months of which he has already served. The actor was found guilty of having illegally acquired firearms—including an AK-56 assault rifle—and ammunition from criminals who owed loyalty to gangster Dawood Ibrahim. Dutt had confessed to having acquired the weapons, and this confession implicated him and led to his conviction. The actor claims to have acted in self-defence—in response to threats by rioters during that phase of communal violence in Mumbai.

Dutt’s looming prison sentence has generated a wave of sympathy. Voices from various quarters have pleaded that he be pardoned. Among those asking for mercy are not just people in Bollywood, which has crores pegged on Dutt starrers, but also a chorus of politicians. UPA ministers apart, West Bengal CM Mamata Banerjee has also spoken in his favour. Sanjay Dutt has also attracted words of sympathy from Chairman of the Press Council of India Justice Markandey Katju, whose argument is that while the apex court is correct in upholding Dutt’s conviction, the state Governor should now use his special power of discretion to pardon him.

Congress General Secretary Digvijay Singh has another sort of point. “An impressionable kid” is how Singh has described Dutt, who was 33 years old at the time of the offence. And if that is not surreal enough, there are legions of fans out in his support, some of whom seem to think his ordeal is an extension of a Hindi film. The soundtrack of Dutt’s Zinda has been doing rounds of the internet as a sympathy generator.

Those who seek a pardon for Dutt forget that the Rule of Law applies equally to all, and a guilty verdict is a guilty verdict. Yet, many appear to be arguing that he deserved to be freed for all the trauma he is said to have already suffered. Family and friends fear that a second stint in prison will turn him into an emotional wreck.

Another argument put forth is that his parents were philanthropic patriots. His late actor father Sunil Dutt and actress mother Nargis were popular film personalities and also one of India’s celebrated Hindu-Muslim couples, but if his DNA is a consideration for a pardon, then it must also be asked why the same do-gooder genes did not kick in at the right time. All Sanjay Dutt had to do was inform someone in authority—and his politician father was a Congressman—about the illegal rifles and grenades doing the rounds, and perhaps the conspiracy could have been exposed in time to avert the blasts. There are several Muslim convicts who, like the actor, have been given light sentences and have shown exemplary behaviour. If Dutt is pardoned, say Muslim elders, then they too should be allowed to go scot free.

Such has been the media focus on Dutt’s ‘plight’ that the larger picture of the 1993 blasts has got blurred. The revelation that Muslims had planted the bombs—‘revenge for the riots’ as some said—has had a terrible effect on communal relations in the city. Muslims since then have been shunned and pushed into ghettos by majoritarian forces. Hindu-Muslim mistrust has festered in almost all aspects of city life.

Mumbai remains on edge. “There is a riot waiting to happen,” fears Abhay Mokashi, a senior journalist. “ Complete harmony between the two communities is not possible, as animosities have grown. Hindus feel that Muslims are involved in crime, while Muslims feel that they are being framed by the majority community. Such mistrust cannot be easily wiped away. This is a consequence of the 1993 blasts.”

According to Sadiq Khan, a 56-year-old hardware shop owner in Thane, what that event did was harden attitudes towards Muslims. Once treated with scorn, they were now feared, with anyone wearing a headcap looked upon as a potential terrorist. “Hindus too have been involved in blasts, but it is the Muslim who is suffering,” says Khan, “We will understand, but our children will not.”

Young Muslims do complain angrily of being stigmatised for no fault of theirs. “Every time it is the Muslim community that goes on the backfoot. Look at the way Muslims are treated. No one wants to sit next to us on public transport. [They] look upon us and what we carry with suspicion, and blame us for everything that happens,” says Fasal Shaikh, a call centre employee, “I got this job after being rejected at many places. I am a computer engineer, but I can’t get a job as I am Muslim.” Communal segregation is now an awful reality in a city that once celebrated an open culture.

The scars of the post-Babri riots have not healed either. “I had a fantastic life in Mumbai as my family earned well.

Everything was destroyed in the riots,” says Khaleeda Ibrahim, a saleswoman at a lingerie shop in Central Mumbai. “The money is not much, but at least they gave me a job,” she says. According to her, even after five years in this job, the owner maintains a tight vigil on her “simply because I am a Muslim”.

The 1993 blasts, the conspiracy of which had been hatched by Dawood Ibrahim in Karachi and Tiger Memon in Bombay (among others), changed the Mumbai underworld as well. Recoiling from what they saw as Muslim treachery, Hindu gangsters distanced themselves from their Muslim counterparts. Chhota Rajan, once the righthand man of Dawood Ibrahim, walked out on the Muslim don with top Hindu aides such as Sadhu Shetty and Madhu Kotiyan. “Until 1993, the underworld was a communal mix and there was harmony between Muslim and Hindu gangsters working for the same don. 1993 changed all that. Now Muslims do not work for Hindus and vice versa,” says a senior police officer in Mumbai.

Rajan vowed to kill all the 1993 conspirators and perpetrators, and his gang killed seven of the accused, including Salim Kurla, Majid Khan, Shakeel Ahmed, Mohammed Jindran, Hanif Kadawala, Akbar Abu Sama Khan and Mohammed Latif. Muslim gangsters were on the run.

Muslims in general started moving to localities where they felt safer. One such was Mumbra, a large Muslim enclave 60 km from South Mumbai in Thane district. The police say that Muslims who moved there were rehabilitated by Muslim gangsters at Dawood’s behest.

Before the riots, Mumbra was a marshy zone with a few Konkani Muslim settlers. Now, its headcount is close to a million, four-fifths of them Muslim, and headcaps and burkhas are everywhere. Hindu hardliners who call it ‘mini Pakistan’ sometimes allude to the area’s alleged ‘terror’ links. Such whispers worsened after Ishrat Jahan, a 19-year-old of Mumbra, was portrayed as a terrorist after she was killed by the Gujarat police in an alleged encounter in 2004 (the charges against her are unproven).

The police also say that the area is a swamp of illegal activity, and local residents complain that people from Mumbra are routinely rounded up as suspects after terror attacks. In September 2011, the state’s Anti-Terror Squad arrested Haroon Naik, a resident of Mumbra, for a fake currency racket and later booked him for an alleged role in a bomb attack of 13 July 2011. On 25 September 2010, the ATS picked up 10 maulanas for alleged terror links; they were later released. In 2009, Parvez Shaikh, a computer professional, was questioned for his alleged role in a conspiracy to eliminate the then Maharashtra CM Ashok Chavan. In April 2003, say the police, two terrorists of the Lashkar-e-Toiba were nabbed in Mumbra. In March 2002, the Thane Police raided a flat in Mumbra and arrested four men who they alleged were Hizbul Mujahideen operatives. In December 2001, Abu Hamza was arrested there for the Parliament attack case.

In the arena of politics, the 1993 blasts saw the UP-centric Samajwadi Party make a mark in the Mumbai region as a Muslim voter catcher. The local unit was led by Abu Asim Azmi, who was arrested in the blasts case and later let off by the Supreme Court on lack of evidence, and has been involved in skirmishes with the Shiv Sena. On several occasions, Azmi has spoken of Hindus with as much venom as the late Sena chief Bal Thackeray would speak of Muslims; Azmi’s latest target is Raj Thackeray of the MNS. On 12 August 2012, an SP-led Muslim protest at Azad Maidan turned violent. Protestors went on a rampage; they attacked policemen, molested female constables, and damaged OB vans of the media. It does not help that Muslims and Mumbai cops tend to see each other as sworn enemies; this has been the case for at least two decades. Muslims complain of police prejudice, while the police speak of laws being flouted in areas of minority concentration.

Abbas Kazmi, a lawyer, feels that Mumbai is sitting on a powder keg. The city could come apart in a flash. In such circumstances, a pardon for Dutt is likely to worsen whatever little prospects of Hindu-Muslim amity there exist.