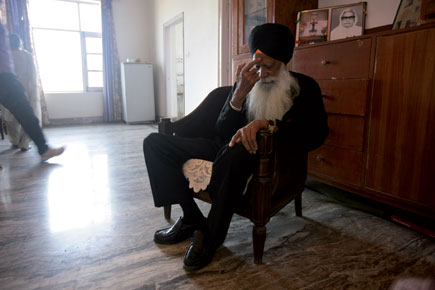 
Bir Bahadur Singh is strikingly tall and has a flowing white beard. In the 82 years of his life, he has seen a lot. He fled Pakistan for India during Partition. He was arrested for rioting during the anti-Sikh carnage in Delhi after Indira Gandhi’s assassination in 1984. Held in the same cell of Tihar Jail as Afzal Guru was, he was barefoot while incarcerated and the cold floor turned his toes blue. And Bir Bahadur was also witness to something he cannot expunge from memory. He saw his father, Sant Raja Singh, behead 26 women of his family, including Bir Bahadur’s 17-year-old sister Maan Kaur.

It was 6 March 1947. Sant Raja Singh took the extreme step to shield the women from ‘dishonour’ by Muslims who Bir Bahadur says had attacked their village Thoa Khalsa in Rawalpindi district, now in Pakistan.

Before Partition, Thoa Khalsa was a largely Hindu and Sikh village. Most of the attackers were labourers working on farms owned by Sikh and Hindu zamindars. “They came in thousands and surrounded our village,” says Bir Bahadur, when we meet him at his two-storey home located in the leafy outskirts of Kurukshetra, Haryana. “We fought hard for three days,” he recounts, “My father was the leader.”

Bir Bahadur taps his fingers hard on his forehead to remember names and dates, but recalls the violence vividly. With defenders of the village dwindling and death a distinct possibility, the leaders of the village decided to negotiate a truce with their attackers. In lieu of sparing the village, the aggressors wanted custody of one of its girls. “She was a very beautiful girl and had a relationship of sorts with one of the Muslim boys,” Bir Bahadur recalls. “The village knew about it, and at first, the village elders contemplated agreeing to this demand of the Muslim mob.”

The thought was dismissed. “Only, my father refused. We were Sikhs and couldn’t have let it happen. Trading a girl with Muslims for life was worse than death for a Sardar who belonged to a lineage created by our gurus to fight Aurangzeb.”

To put voices of dissent to rest, Sant Raja Singh decided to set a precedent. On 9 March, he and his younger brother Avtar Singh rounded up 26 women of the family in a haveli that belonged to their friend Gulab Singh. “They were women of ages ranging from 10 to 40 years, sisters, sisters-in-law, daughters, nieces and aunts. The rest of us, including my mother, were packed off to the rooms upstairs,” says Bir Bahadur.

He was 16. Curious to see what was happening, he went downstairs. “My father was holding a khanda (a double-edged sword). He summoned Maan Kaur, as he didn’t want others to feel that he was weak when it came to his own daughter.”

Emotions ran high. “I think [Maan Kaur’s] dupatta came in the way,” says Bir Bahadur, “Before my father could say anything, my sister herself took her dupatta off and moved her guth (plait) out of the way for him to go ahead. They understood each other without even exchanging glances. She was brave. Her head fell a little away from her body. My father called out to my aunt’s daughter next. Then my uncle’s daughter… The villagers stood outside the haveli.”

More than 65 years later, the memory haunts Bir Bahadur. “She was to be married, and our father had written to my elder sister who lived in Calcutta to look for a groom,” he says. “My elder daughter, who lives in Yamunanagar, resembles her a lot. My daughter was brilliant in school… the top NCC cadet of her batch. Sometimes, we feel that she is a reincarnation of my brave sister.”

The beheadings did not end the bloodshed. Muslims took control of the village. Sant Raja Singh was killed. Many women took their own lives, as his wife Basant Kaur recounted in Urvashi Butalia’s book The Other Side of Silence: Voices from the Partition of India. Many women jumped into the village well to save themselves from their attackers. Basant Kaur, by her own account, also tried jumping into the well with her sons, but they did not drown. The well was already full of bodies. Bir Bahadur, however, reacts gruffly to a mention of that episode in Butalia’s book. That wasn’t his mother, he says. “That was another Basant Kaur… she was very pretty. The poor girl was from Pathankot, but her daughter grew up and did well.”

In June 1947, the rest of Sant Raja Singh’s family found refuge in Delhi. The house they occupied, at 31 Masjid Lane in the Bhogal area, was one abandoned by a potter’s family that had left for Pakistan. Most Sikhs from Thoa Khalsa and its neighbouring villages like Thamali settled around Masjid Lane. Now based in Kurukshetra and one of the few surviving Partition witnesses from Bhogal, Bir Bahadur goes through pictures of his 14-year-old grandson (his younger daughter’s son) who lives in New Zealand and is the only Sikh in school.

“We treated Muslims very badly, sometimes worse than animals,” he says, turning reflective. “Our Muslim workers were very honest and reverential. But we would treat them like untouchables. A backlash was bound to occur and we deserved it in some ways. We were offered refuge by one of my father’s Muslim friends. But we did not trust him. We should have.”

A few days after the beheadings, the girl who was demanded in the trade-off eloped with her Muslim lover from a camp in Montgomery, a district near Lahore (now called Sahiwal in Pakistan). “She was alive, while we lost over a hundred women trying to protect their honour. That ill-fated girl married a Muslim and brought death to us,” says Bir Bahadur.

In hindsight, does it not seem like a tragic error of judgement? “Certainly not,” he says. “Had my father agreed to that arrangement, I wouldn’t have been able to face you or tell you my story. Those girls could have fallen prey to the attackers later. Many women did. It was the best they could do to protect their honour.”

Our conversation meanders to Bir Bahadur’s spat with the late Cabinet minister Buta Singh that he says led him to jail after Delhi’s 1984 riots. Despite this bad turn done to him, he says, he saved Buta Singh’s son’s life after a road accident by rushing him to a hospital in his Fiat.

Speaking of those troubled times—his departmental store on Malcha Marg in Delhi was destroyed in the 84 riots—Bir Bahadur shows us photos of his parents displayed in the lobby of his Kurukshetra house. This house, in which he lives with his wife Jasbir Kaur, was built nearly three years ago and is the largest home he has stayed in since moving to Delhi. “This house reminds me of my father’s sacrifice and the troubles we went through trying to rebuild our lives,” he says.

Beside a sepia photo of Basant Kaur is a picture of a lit diya. “That’s my father,” Bir Bahadur says. “This picture is a way to remember him and the sacrifice he made. It is why I can proudly call myself a Sardar and talk to you, looking you in the eye. It is how I remember my sister Maan Kaur.”