A Conspiracy of Yadavs

After blatantly favouring one caste in government appointments, the judiciary comes calling at Akhilesh Yadav’s doorstep 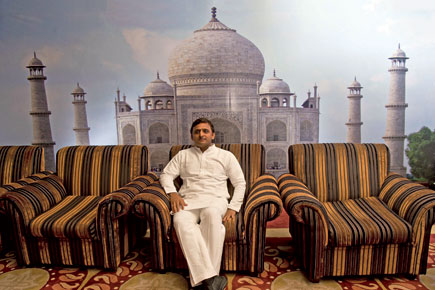 On 14 October, the Allahabad High Court set aside the appointment of Anil Kumar Yadav as chairman, Uttar Pradesh Public Service Commission (UPPSC) terming it as ‘ultra vires’ of the Constitution and a case of ‘conferment of political largesse’. Yadav had taken over the post of chairman in April 2013 and in little over two years in office became more famous for controversies than his work.

For the Akhilesh Yadav led Samajwadi Party government that appointed him, this signals trouble. Political largesse has become synonymous with its appointments, especially in education and examination bodies. The court’s observation underscores what has been evident to the entire state—that the beneficiaries of the largesse are inevitably Yadavs, the OBC caste that patronises the Samajwadi Party.

It follows a series of PILs being filed in the High Court questioning several appointments and results of competitive exams. This is not the first case where the court has had to intervene. On 8 September, the High Court quashed the appointment of three members of Uttar Pradesh Higher Education Service Commission (UPHESC) while declaring it illegal. These members were Ram Veer Singh Yadav, Rudal Yadav and Anil Kumar Singh. The HC also quashed the appointment of Lal Bihari Pandey as the UPHESC chairman. It had also junked the state’s plea for regularisation of services of contractual teachers. Earlier this month, the court restrained the appointments of SK Singh from performing duties as UPHESC secretary and Sanil Kumar as chairman of UP Secondary Education Service Selection Board (UPSESSB).

The judgment in the case of Yadav is an embarrassment for the government. “Embarrassment is too small a word,” says Laxmikant Bajpai, BJP state president of UP. “This government has misused every government machinery to help a particular caste and all has happened in broad daylight.”

Ayodhya Singh, president of Pratiyogi Chhatra Sanghash Samiti (PCSS), a student body of Allahabad fighting against illegal appointments and recruitments in the state, demands a CBI inquiry. “It would be one of the biggest recruitment scams in recent time. The way money has exchanged hands and efforts have been made to benefit only Yadavs will only come out in detail with a CBI intervention,” he says.

Awanish Pandey of PCSS says the scam is run by a chain of people in an organised manner. He says, “It starts with appointing a person of choice to any of the government examination bodies. Then the guy starts playing with the system to offer maximum benefit to a certain caste (Yadavs) candidates in government jobs.”

Documents sourced by Open show some merit to the charges. Take the case of Anil Kumar Yadav. The post of UPPSC chairman was falling vacant on 31 March 2013, after the term of Malkiyat Singh. On 29 March, a note was put up by the Officer on Special Duty of the Department of Personnel to the Principal Secretary stating that post of chairperson and three members were required to be filled up. The file note indicated that a nomination would have to be made by the Chief Minister before a proposal was submitted to the Governor. The Principal Secretary and the Chief Secretary endorsed the file on the same day, 29 March 2013. It is important to note that there were 83 candidates who had applied for the post of chairman. No one was called in for an interview nor were their credentials checked before rejecting them.

On the other hand, the resume of Anil Yadav was sent on 21 March 2013 from the Samajwadi Party central office. On 29 March, the day the notification was put up, the chief minister nominated Yadav as the new chairman, two days before the post was even vacant. The Governor approved the appointment on 31 March. On the same day, the Officer on Special Duty sent out a communication to Mainpuri’s district magistrate (DM) to provide a background verification of Anil Yadav. The report, that included clearances from the tehsildar, sub-divisional magistrate, DM and the SSP, along with submission of an affidavit by Yadav giving a clean chit to himself, was done in 24 hours. The fact that all this happened on a Sunday and that everyone came together in issuing the clearance is a point raised by the HC in its judgment. The government argued that Yadav was a member of the UPPSC since 2006 and hence was suitable to become chairman. But another UPPSC member who applied for the post was not considered. There are also questions about Anil Yadav’s qualification and conduct including criminal charges against him in Agra, his native place.

While Yadav’s appointment might have been suspicious, what he did after taking charge was even worse. Barely two months into his new post, in July, he introduced a new reservation system in competitive exams for government jobs. Reservation would now be granted at the level of prelims, mains and interviews separately. On 5 July, the Public Service Commission announced the result of Provincial Civil Services (PCS) 2011 (Mains) examination and because of the new reservation system, 176 more OBC candidates got selected for interviews. Out of 176, 147 were Yadavs.

Large scale protests soon followed and the government had to retract the reservation system on 30 July. On 14 August, a new revised result for PCS 2011 exams was announced and only 86 OBC candidates made it for the interview. Out of that 54 were Yadavs and 50 were selected in the interview. The PCS interview conducted in the state is of 200 marks and the guideline says a candidate should be given minimum 80 marks and maximum 140 marks. “On close scrutiny we found out that the Yadavs in the list have got around 135-140 in the interview with an average of 138,” says Ayodhya Singh. “While other OBC castes got maximum 110 marks.”

Between May to November 2013 the UPPSC conducted 27 different exams for filling of lecturers in government colleges. Out of 186 vacancies, 129 went to Yadavs; the rest included everyone from general category to OBC, EBC and others. Several experts who were part of the interview panel refused to participate. Despite the protests, the interviews carried on. “We are raising this point and demanding scrutiny of the results. How can an interview take place without the panel?” says Pandey.

Similar incidents also took place in UP Lower PCS 2008 results. When they were announced in June 2014, out of 1,256 seats, 640 were of executive category. In the 640, 89 were Yadavs, a number not large considering their population percentage. But a close look at the marks suggests malpractice. The interview was of 50 marks. The minimum and maximum marks that can be given is 18 and 35. All the 89 Yadav candidates got around 34 to 35 marks in the interview and that cleared their selection after adding up the marks of the Mains and Prelims.

The PCS 2011, 12 and 13 results show that out of 86 newly appointed SDMs, 56 were Yadavs. “In every government job during this government, on average more than 50 per cent selected candidates are Yadavs,” says Pandey.

In the final result of Assistant Prosecution Officer (APO) exams, a Yadav candidate was selected to fill a Scheduled Caste seat. When the student unions protested, the commission accepted it as a human error. The seat went back to one from the SC category. But the Yadav candidate still got selected, replacing an OBC candidate.

Apart from examination results, there are also numerous cases of question papers being manipulated and selections made based on that. For the first time in the history of UPPCS, question papers were leaked in March this year. “Anil Yadav is just a pony,” says Devendra Pratap Singh, MLC of the Samajwadi Party. “Behind the scene are the chief minister and his ministers who are recruiting unqualified people to serve their interests. All the recruitments under this government should be cancelled.”

The High Court has also questioned the appointment of Javed Usmani as chief information commissioner and the eight other information commissioners. It has sought details to explain the exercise undertaken in these recruitments. Anil Yadav, Ramveer Yadav, Rudal Yadav, Anita Yadav, Lal Bihari Pandey, Sanil Kumar— all have served as either member or chairman of some education commission in the state under Akhilesh Yadav and their appointments have either been quashed or restrained by the High Court.

Open tried to get in touch with Anil Yadav but he could not be reached. The state government denies favouring a particular caste. “Some matters are within the purview of courts and it would be inappropriate to talk on the same,” says Rajendra Coudhary, cabinet minister and spokesperson of the UP government. “I can assure you that the government doesn’t single out a particular caste or community. You are reading too much into something which doesn’t have a substance.” What is evident is that the Akhilesh Yadav government is feeling the heat and if the judiciary continues to question these appointments, the fallout could affect the 2017 Assembly elections for the Samajwadi Party.