A Close Look at Didi’s Numbers 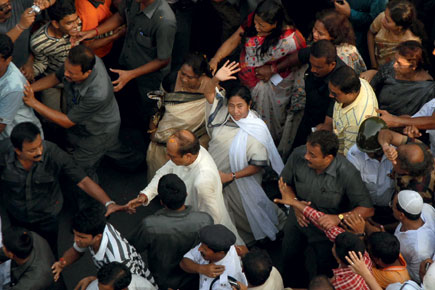 
KOLKATA ~ We know the Congress is in no hurry to lose the Trinamool Congress (TMC). On paper, the Samajwadi Party’s 22 MPs can compensate for the TMC’s 19 in the Lok Sabha. But even a great show in the five state polls will not take the United Progressive Alliance (UPA) anywhere near the halfway mark in the Rajya Sabha, where the TMC is all set to increase its strength to eight this year. The TMC also needs to stay in the UPA so that Mamata can squeeze the Centre for funds to fuel the beleaguered Bengal economy.

Yet, the war of words is getting ugly. Clearly, the Bengal Congress is in no mood to cut another lopsided deal for the forthcoming Panchayat polls where the party controls 99 zila parishads, compared to the TMC’s 120. Also, the TMC’s growth plan calculates that, after the 2010 landslide, eating into the anti-Left space occupied by the Congress is easier than making further inroads into the residual Left vote bank of die-hards.

The TMC has already broken away two Congress Panchayat units in north Bengal. Understandably, the state Congress leadership feels that the party is better off contesting the Panchayat polls on its own. So far, the pressure of the High Command has kept such sentiments in check.

So Mamata’s routine provocations are crafted to incite the Bengal Congress in such a way that she does not have to do the dirty job ofsnapping ties. Curiously, TMC strategists prefer to disassociate with the Congress in phases, starting at the Panchayat level, followed by the Assembly, and then the Centre.

To believe TMC insiders, all of these are part of the party’s well thought-out ‘Congress policy’. First, the TMC wants to dump and marginalise the Congress in the state, aware that the latter is too hamstrung, for now, to return the compliment at the Centre. Subsequently, the TMC will evaluate the fortunes of the UPA in the run-up to the 2014 general elections and decide whether to contest on its own and dominate the winning alliance with a good number of MPs, or, if the UPA is truly in the dock, strike a pre-poll alliance with the Bharatiya Janata Party (BJP).

Mamata holds absolute control in south Bengal, where she can reap a handsome majority even if all other parties unite against her. It is in the north that she needs support. Here, the numbers tell an interesting story. Consider the last Assembly polls. In Malda’s Habibpur, the CPM defeated the TMC by a 1.43 per cent swing, while the BJP bagged 20.07 per cent. To estimate the allied contribution of the Congress in the TMC’s vote share, remember that the Congress on its own had managed just 6.58 per cent here in 2006.

Not that the trend is entirely north Bengal-specific. For example, In North 24 Parganas’ Sandeshkhali, the CPM beat the TMC by 4,232 votes and the BJP bagged 17,425. But the BJP evidently has a bigger presence in the northern districts, where, barring north Dinajpur, its vote share is higher than its humble state average of 4.04 per cent.

Out of 95 seats in the eight districts of Darjeeling, Jalpaiguri, Cooch Behar, South Dinajpur, Malda, Murshidabad, Birbhum and Nadia, BJP-backed candidates won four, the party came second in one, and in 44 seats it bagged more votes than the victory margin of the winning candidate. In the remaining 199 seats in the south, its vote crossed the victory margin only in 35 seats.

The same trend was apparent in the 2009 Lok Sabha polls. The BJP won the Darjeeling seat. In Alipurduar and Jalpaiguri, the party bagged 21.40 and 9.15 per cent votes, respectively. It made a mark in seats such as Balurghat (6.82 per cent), Malda North (6.68 per cent), Balurghat (6.82 per cent) or Bolpur (6.50 per cent). Down south, the party’s vote share dwindled. For example, in coastal Kanthi, the BJP managed 2.84 per cent of votes and in Kolkata’s Jadavpur, just 2.34 per cent.

The BJP still cannot influence outcomes in too many seats even in north Bengal. In many constituencies, the TMC-Congress combine won in 2010 despite the BJP slicing away big chunks of non-Left votes. Nevertheless, the BJP’s less-than-pushover status in the north, where the TMC can do with a little help, seems to comfort Mamata’s strategists. Moreover, the TMC will have to offer far fewer seats to the BJP than even a compromised Congress would bargain for.

But, like in 2006, a saffron ally will also distance some of Bengal’s 25 per cent Muslim voters from the TMC. However, Mushirdabad and Malda districts, where the Muslim vote is the most decisive, are traditional Congress strongholds where the TMC (with one seat each in 2010) cannot anyway hope to get a foothold on its own.

In the four southern districts—North 24 Parganas, East Medinipur, Hooghly and Kolkata—with a strong Muslim presence, the TMC holds absolute sway (51–61 per cent votes in 2010), and enjoys staunch Muslim support thanks to its role in the Nandigram (East Medinipur) and Singur (Hooghly) agitations. In Birbhum and South 24 Parganas, though, the TMC may suffer if it loses a chunk of Muslim votes.

So what is Mamata’s game? In any case, looking to maximise the party’s numbers in Parliament and play kingmaker, the West Bengal Chief Minister may not be keen at all on a pre-poll alliance. But irrespective of her future with the BJP, she is all set to snap ties with the Congress. It is only a question of time, really.