Jyoti Basu had everything needed to make West Bengal one of India’s premier states. It is an enduring tragedy that he refused to do it. 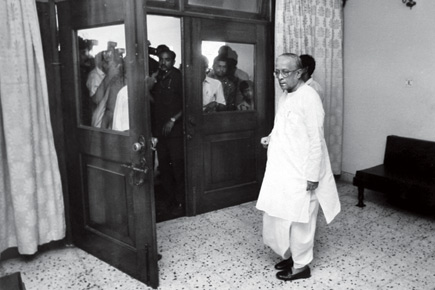 Jyoti Basu had everything needed to make West Bengal a premier state. Too bad he refused to do it.


Over the past few days, many glorious epithets have been used to describe India’s longest serving chief minister, who passed away in Kolkata last weekend. Leaders from across the political spectrum have paid glowing tributes to his persona, and eulogies have poured in from even beyond India’s boundaries. That Jyoti Basu was a charismatic, intelligent, articulate, well-educated, pragmatic and able person is beyond doubt. That such a person consciously presided over the decline of Bengal, and did so despite being aware of it and in possession of what was needed to stem the tide, is also unarguable. Why the veteran Marxist so nonchalantly allowed Bengal to come to ruin will remain one of the most enduring questions among politicians, historians and people of the state.

But the answer can be found in one simple fact. Jyoti Basu was a member of the Communist Party of India (Marxist) first and a chief minister later. His primary loyalty was to his party. Thus, as the CPM grew and entrenched itself impregnably in Bengal under Jyoti Basu’s watch, the state itself kept wasting away. Perhaps, it is not even so surprising that as CM, Basu rarely participated in Independence Day celebrations, preferring to vacation at that time in England.

Jyoti Basu can never be forgiven for devastating Bengal, says former Chief Minister Siddhartha Shankar Ray. “Jyoti could never rise above his party’s interests and agenda. He failed Bengal because he failed to adhere to his ‘raj dharma’. He functioned only as a CPM leader, not as chief minister.” The tragedy, says he and many others who’ve watched Jyoti Basu from close quarters, is all the more distressing because the man had it in him to really make Bengal a leading state economically, socially and educationally.

“Basu, with his charm, access, privileged position, legal training and worldly outlook, could have done so much (for Bengal). His sad epitaph is that he did so little,” says Sunanda K Dutta Ray, writer and former editor of The Statesman. “Basu was one of the most intelligent persons I have ever met,” says a very senior officer of the IAS who retired as additional chief secretary of the state, “His grasp of administrative matters, his quick thinking, his ability to take decisions on his feet, and his nuanced approach to all matters, administrative and political, was really unparalleled. But these sterling faculties were, unfortunately, never deployed for the benefit of the state. Instead, all his decisions, all his policies, were dictated by his party and were always subservient to his party’s interests.”

Inevitably, the CPM leader’s order of priorities had its repercussions on how Bengal was run. “Jyoti never made any effort to assert himself within the party and make his dogmatic comrades realise their follies,” says Ray, “That’s why he was such a good chief minister for his party and such a bad one for Bengal.”

Jyoti Basu assumed charge of Bengal in 1977. Very little has gone well for the state, since. Starting with the flight of capital and collapse of the state healthcare system, to a rapid downslide in education and other amenities, the list of failures is long and abysmal. “Basu quietly acquiesced to his party’s incomprehensible decision to abolish English from the primary and middle-school levels in government-aided schools in Bengal,” says economist Abhirup Sarkar, “This single step jeopardised the careers of tens of lakhs of students and rendered a large section of them unemployable. With his background and outlook, Basu could not have not known the monumental folly of this step. But he did nothing when he could have easily leveraged his charisma, public support and stature.”

In true communist style, Jyoti Basu allowed his party’s commissars to take over the reins of governance in all districts across the state. He allowed his party to pack schools and colleges almost everywhere with (at best) mediocre and (mostly) unqualified and undeserving party cadres and loyalists. Not a single teacher in any government college and university could be appointed without the party apparatchiks’ consent.

Jyoti Basu himself facilitated the formation of a trade union in the police constabulary during his stint once as home minister in the United Front government in Bengal. He allowed the politicisation of the bureaucracy and state machinery; most lower and middle-ranking state government employees found it necessary to rally under a trade union affiliated to his party. Work ethics and culture went for a toss, earning Bengal notoriety that persists till date. Government employees, most of them loyal to the CPM, simply stopped working. Jyoti Basu allowed the drift because to stem it would have adversely affected his party’s interests.

Jyoti Basu is often credited for being the first CM to come out with an industrial policy way back in 1994. But he and his comrades were the ones who drove private capital out in the first place. He would surely have realised later the recklessness of his and his party’s earlier actions and policies, but by the time he set about rectifying them, it was too late. Even today, Bengal struggles to attract private capital. “When I was India’s ambassador to the US,” recalls Ray, “Jyoti led a business delegation to attract American capital. I set up interactions with top CEOs and chambers. MoUs worth an astounding $130 crore were signed. Basu went back happy, but did nothing to follow up on the MoUs. Not a single one turned into an investment on the ground.”

During his first couple of tenures as CM, Jyoti Basu’s response to flight of capital was one of utter disdain. “These unscrupulous moneybags are scrambling to other states that are offering blandishments to them. Let them go,” he would often say. He did nothing to restrain the CPM-affiliated Citu—Centre of Indian Trade Unions—from maligning, humiliating and even assaulting senior executives in the private sector and placing impossible demands on them, thus leading almost all corporates to pull out of Bengal. Jyoti Basu then attributed the resultant loss of millions of jobs to New Delhi’s ‘step-motherly treatment’ of Bengal, a bogey he never tired of repeating.

The pursuit of a misguided anti-elitist (read: anti-excellence) line laid down by the party led the best and brightest to leave Bengal. Jyoti Basu, being an urbane leader himself, would have known that his party’s policy of neglecting urban Bengal, especially Kolkata, would do incalculable harm to the state’s image. This city came to be known as the best metropolis to get away from, a perception that lingers among many.

To be fair, Jyoti Basu and his party steered ‘Operation Barga’ that gave rights to sharecroppers, improving their financial condition and giving them dignity. Ceiling-surplus land was re-distributed among millions of landless farmers. The three-tier panchayat system was strengthened in rural Bengal, giving the poor a new sense of empowerment and independence from urban dominance. These measures helped the party and enhanced the CM’s stature.

But then, Jyoti Basu and his party lost the plot midway. Farmland grew fragmented, and failure to increase agricultural productivity led to dwindling incomes, creating new disquiet in rural areas that were the party’s bastions. The stranglehold of his party over the panchayat institutions started evoking resentment. “Even in the agricultural sector, Basu could not take the initial good work forward. So how can he be called a far-sighted man, a visionary and a good administrator? How do you judge a man for whom the party, and not the people he’s meant to serve as CM, is supreme?” asks Sarkar.

Bengal’s misfortune, as Ray says, is that Jyoti Basu was a communist. To him, the party was supreme, with Bengal a distant second. The tragedy is even greater because the man had what it would’ve taken to arrest the state’s downslide and restore it to its lost position as an industrial, economic, social and intellectual powerhouse in India. That he didn’t is bound to remain the helmsman’s troubled legacy.