With minimal budgets and ample creativity, filmmakers are creating series and shows while locked in 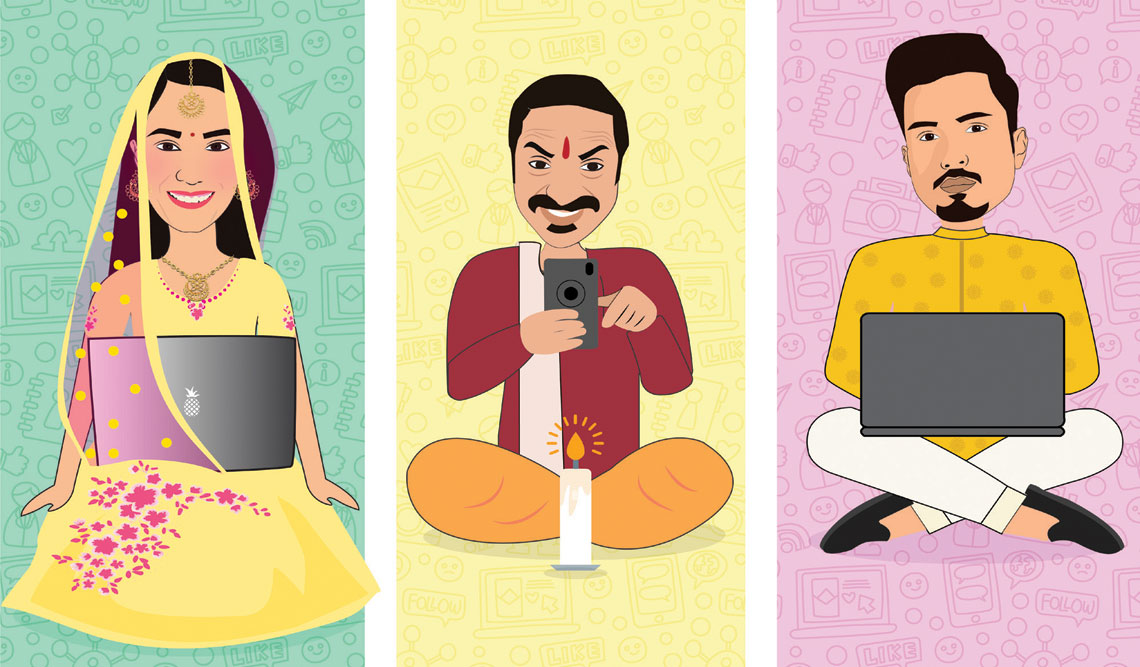 A Viral Wedding is a web series that was written, shot and edited from the homes of various film professionals


ICONIC SWEDISH FILMMAKER Ingmar Bergman once said, “You only make movies when you have something to say. It has nothing to do with the camera or lenses you use.” The definition of a film in recent times may have to do with sets, superstars, orchestral music, visual effects, high-end cameras, etcetera. But that seems to be changing in lockdown times. Today, creative expression trumps all else, as one’s space for imagination and production is limited to the house. But intrepid storytellers have chosen to make films while being locked in and in the process have paved the way for a new language of moviemaking—films from home.

In the world of smartphones where high-speed internet and wide-angles are part of everyday life, you’d think in-house moviemaking is an easy feat. But make no mistake, these aren’t just selfie documentaries. The best of them pack in punches—and even social messages. Irrespective of the impact these films hope to create, what’s relevant is that the film community is adapting to the changing scenario.

“To be honest, we have all done it as upcoming filmmakers. Budgets would be close to nil and we would shoot at home with one or two characters, basic lighting and on our small digital cameras. As independent filmmakers we’re pretty much wired to make something out of a lack of resources and there couldn’t be a better time to do it,” says filmmaker Raj Nidimoru (of Raj and DK, who is the writer for films such as The Family Man and Go Goa Gone) who was among the first to helm a shoot-from-home project almost immediately after India went into lockdown. The show, A Viral Wedding, is a made-from-home web series consisting of eight episodes about a young social media influencer whose marriage plans go bust when the lockdown is announced. This unique show has been written, shot and edited from the houses of various film professionals across India. Actor-director Shreya Dhanwanthary who debuts as a director wrote the entire screenplay in under 24 hours. “It came to me days after we went into lockdown. I was talking to Raj sir about how we can make use of this time, and he suggested I write something. I wanted to make something funny, that’ll really make people happy in these times. The story is about a girl whose marriage is stalled due to the pandemic and how she goes about figuring a fix to the problem. Within a few days of me brainstorming with the idea, we had the show on paper, and I had a cast and crew of over 15 people from different parts of the country. My music director is in Bangalore, my sound guy in Ulhasnagar, one of my actors is in Ghaziabad, many others including myself are in Mumbai and we all stayed within the confines of our homes and made this happen.”


Joining Dhanwanthary are others like director Rahul Bhushan who in his own words is otherwise busy selling fat-free yogurt through television commercials, but discovered a new voice in his head through the pandemic. His film The Art of Decay is about a woman in a dystopian world who is plagued by the deteriorating cityscape around her and finds inspiration after a journey. Shot on Fuji film with a DJI Mavic Drone in a couple of days, Bhushan’s film looks as professional as any regular production. The trailer opens with a top shot of a globe sitting in the middle of a landscape of decaying white tiles. Thanks to help from his wife and neighbour, he’s created such a visually intriguing set that you can hardly tell that it’s been shot in the confines of his house. “It started after I saw the Facebook Covid film. I kind of cried for a few minutes. I went for a cold shower and came back with an idea to make a happy film basically to uplift spirits. We were a tiny crew, my wife Polina acted, found a costume, did production-art design and cooked. Nagaraj A Rathinam who also happened to be my neighbour shot and gave us his camera and a drone. A friend, Anuj, helped him, while I directed, cleaned the house and utensils and was the assistant to the cook,” Bhushan says.

But all this isn’t as easy as he makes it sound. Not everyone who chooses to make a film during a pandemic has support and the challenges are unforeseen. Two of the primary roadblocks are budgets and coordinating logistics with post-production technical crew. Like Dhanwanthary’s music director, who for example, had to move to a hotel with his family thanks to bad internet connectivity in his area. The crew also had to deal with issues like a six-hour delay in file transfer because of a power shutdown. And ensuring that the actor and director are on the same page, as the actor has to direct herself. “I made sure I wrote all the scenes in daylight so different actors didn’t have to go through the task of matching lighting in the frames. Now each of them has shot their scenes from their homes and it’s all coming together as something so beautiful. It’s almost like a reality show where the audience and the people on screen are going through the same thing. So despite all the issues, I am hoping to establish a connect with the viewers because they are on the same page as my characters in the show,” Dhanwanthary adds.

Budgets are literally negligible with most of the cast and crew working pro bono or on minimal remuneration. “Till we manage to put the show on a commercial platform, it’s difficult to match the remunerations of artists who come on board for a project like this. People shoot in the homes, on their phones, so hiring costs for cameras, lights, locations, costumes are all out. Again it’s like an independent film where there is scope for exposure, growth and maybe some money once it’s on a platform. So if someone has chosen to do this, it’s purely because they are passionate for the craft of filmmaking, and not for monetary reasons,” adds Nidimoru.

Interestingly, the ad film industry, notorious for spending crores to create ads for brand promotions, are lapping up the shoot-from-home idea. In the past four weeks, during the lockdown, many top-notch brands have put together films featuring real-life couples, parents and children. According to ad filmmaker Naveed Khan who has been in the business for over 10 years, the cosmetic nature of television commercials is shredding, thanks to films being shot from home. Brands are using real families and visuals from actual homes to promote their products. Like the Asian Paints commercial where they use the ‘Har Ghar Kuch Kehta Hai’ tagline to show that a filled home is a happy home. In the ad we see a girl reading a book to her dog, grandparents watching television and a middle-aged man sweeping the house with headphones on. These vignettes of real people in their own space have been strung together with poignant music and a voiceover that encourages one to ‘stay home, stay safe’.

Khan has also produced a film for Vicks that talks about social distancing through the relationship between a senior citizen and his neighbour. “As an ad film producer, for me it’s the reshuffling of the puzzle right now where the only objective is for the message to reach people. Nobody is talking about the looks of the actor, or the colour of the shot or how hot it is on the set. All of this becomes secondary, especially if the brand is trying to put out a film that reinstates a social message like ‘stay at home’. It may not be shot on a fancy camera, but the sentiment is right. And that’s the core of filmmaking anyway, isn’t it? Somewhere down the line we all forgot about the real art of filmmaking and focused on everything else, and this lockdown is bringing us back to our basics,” he says.

In early April the short film that got everyone’s attention was Family which conveyed a social message and which starred a pan-India dream cast that included Amitabh Bachchan, Rajinikanth, Ranbir Kapoor, Priyanka Chopra, Alia Bhatt, Chiranjeevi, Mohanlal, Mammootty, Diljit Dosanjh, to name a few. Prasoon Pandey, the ad filmmaker who directed Family says,“Before these extraordinary circumstances that we have been put into, it would be practically impossible to create a film without meeting your team. It’s not something one would ever think of doing simply because filmmaking is all about team effort. There are multiple functions involved in creating a film from scratch and it looks like an impossible task to do it sitting at home. But in all honesty, if the idea is strong, one can make it happen.”

Directors Raj & DK are now setting up a new arm D2R Indie to encourage microbudget cinema. “This is to encourage a fundamental approach to storytelling. The most basic form of independent filmmaking, where unique, fresh stories are told irrespective of what technology or facilities are available. We feel it’s a great outlet for people who are stuck at home now and brimming with ideas. Once the lockdown is lifted, the division will continue to encourage filmmakers to explore this format of making bitesized creative expressions, along with classic/longer format stories,” adds Raj.

Cinema watching and making, as we know it, is not going to be the same for a long time. In the meanwhile, if directors and actors return to a fundamental form of filmmaking, it is a cause to celebrate.