×
The Freedom Issue 2019 | Postcards from History

Doshipura: A Graveyard of Justice

What lies beneath the never-ending Shia-Sunni dispute in Doshipura 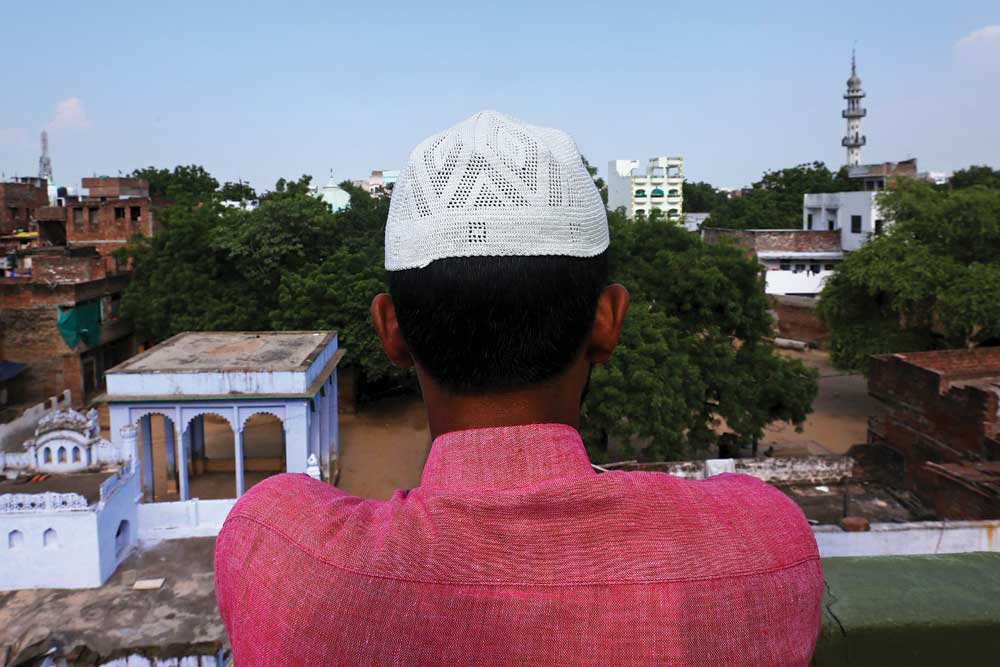 The disputed site in Doshipura, Varanasi, UP (Photos: Raul Irani)


IF DOSHIPURA, a weavers’ locality in Varanasi, were to have a heartbeat, it would be the rhythmic clacking of power looms. For generations now, the residents of the mohalla have been weaving coloured strands of silk into the six-yard wonder that is the Banarasi saree, though much has changed. The handlooms have given way to power loom even as modern designs replace traditional Mughal motifs. The Banarasi weaver is now more likely to be weaving a monga silk from Assam or even a painthani from Maharashtra than the saree that derives its name from the city. Through all these changes, there is something in Doshipura that has remained constant: a legacy in the form of a court case that started in the late 19th century and continues to shape the social and religious fabric of the mohalla.

The Doshipura graveyard case, as it is known, occupies a certain standing in the history of Indian legislation. It is one of the oldest cases in the country which started in 1870s and though a verdict was delivered in 1981, it was never implemented. Till as recently as 2014, the two sides, Shias and Sunnis of Doshipura, were seeking further clarifications and filing fresh applications on their grievances. At the heart of the issue are nine plots in Doshipura which Shias claim as theirs, given to them by the Maharaja of Varanasi for holding religious discourses and recitations during Muharram while Sunnis claim that part of the area was their graveyard. The disputed plots include a mosque, a baradiri and an imambara, all of which are used by both sects. There is permanent police presence in the area, which gets intensified during Muharram.

Successive courts have ruled in favour of the Shia community with plenty of back and forth and even the state administration has been caught in the crossfire. In 1981, the Supreme Court too upheld the rights of Shias. The two graves, it was later ordered, were to be shifted with boundary walls constructed around the contested plots. In 1986, the state administration cited fear of sectarian conflict and the court put its own order in abeyance for the next decade, calling for a peaceful resolution. In 1996, the abeyance was extended by another 10 years. In 2013, the court asked Advocate General Irshad Ahmad why the dispute has been allowed to linger while in 2014, a bench comprising Justices RM Lodha, Kurian Joseph and Rohinton Fali Nariman declared themselves ‘satisfied’ that the two graves had been enclosed by a permanent masonry wall and as such ‘no further order needs to be passed’. The bench did however grant the applicants liberty to make a fresh application ‘narrating facts and the subsisting grievances of the applicants’.

Grievances abound. Shias want a wall constructed around all the nine plots while Sunnis contends that the matter is settled as Shias have the right to worship during Muharram and can’t claim anything more. “They have got everything they wanted but they still want more. This is not just a piece of land for us, it is the largest community space we have,” says Haji Mobin Ansari, a trader and the unofficial spokesperson of the Sunni community. The land, hemmed in by homes from all sides, doubles up as a playground for children as well as a space for weavers to work. “The Shia neighbourhood is at least 200 metres away from here and they already have four mosques of their own. But if they insist on persisting, even we won’t give up.” Shias, on their part, refer to the case as their ‘virasat’ (legacy) and only want what is their due. “Every judgment has been in our favour. Over the years, the simmering tension, especially during Muharram, has abated but a boundary wall will give us an added sense of security,” says Syed Abbas Mujtaba Firdausi, a Shia high court lawyer. In both sects, a dedicated group of men have carried the fight forward from a previous generation. On either side, it is difficult to find families of the original litigants as the case papers have passed down generations as a sort of twisted heirloom.

In a column written for The Hindu in December 2018, Justice Markandey Katju referred to the Doshipura graveyard case as an example of unimplementable orders passed by the Supreme Court. Katju wrote in the context of other orders like witness protection but the issue of the entanglement of law and religion in independent India has remained a thorny one, right from the time of the Shirur Mutt case to now Sabarimala and triple talaq. Courts have often been called upon to redefine rituals and practices even as the debate over a uniform civil code continues to rage. Judgments like triple talaq and Sabarimala became battlegrounds for both political as well as ideological clashes.


In India, the fundamental right to freedom of religion are dealt by Articles 25 and 26 of the Constitution. Article 25 gives every citizen the right to free profession, practice and propagation of religion while Article 26 gives freedom to citizens to manage their religious affairs. The two articles formed the bedrock of deciding in favour of the Shia community in the Doshipura judgment. “The Indian courts do not have ecclesiastical jurisdiction. The court has no express jurisdiction to decide on religious matters unless they do not come under Article 25 (1) and Article 26,” says Rahul Unnikrishnan, an advocate at the Madras High Court. According to him, “The court can interfere with the religious denomination only when they affect an individual’s right… public order, morality and health.” Unlike religion, laws by their very nature are clinical and neutral. The Constitution was drafted in a manner so as to not interfere too deeply in issues of faith but the task of interpreting the Constitution lies with the Supreme Court. In India, courts have the jurisdiction to decide what constitutes an essential part of religion (rituals, etcetera) and, as such, are deserving of protection under the Constitution. And this was a precedent set by the Shirur Mutt case (1954) where the meaning of religion, with all rituals and practices integral to it, as protected by the Constitution, was enunciated. Hence, triple talaq was deemed not an essential practice as was forbidding the entry of women in Sabarimala.

In his book, Legalising Religion: The Indian Supreme Court and Secularism, Ronojoy Sen touches upon the role adopted by the apex court, terming it unusual. Sen quotes from a ‘scathing assessment’ by Rajeev Dhavan and Fali Nariman on this practice to make his point: ‘With a power greater than that of a high priest… judges have virtually assumed the theological authority to determine which tenets of faith are ‘essential’ to any faith and… underscored their constitutional power to strike down those essential tenets of faith that conflict with… the Constitution.’

Till as recently as 2014, Shias and Sunnis of Doshipura were filing fresh applications on their grievances. At the heart of the issue are nine plots in Doshipura which Shias claim as theirs while Sunnis claim part of the area as
their graveyard

Seen through this broad lens, the Doshipura graveyard case is a straightforward one about the right to essential practice, but the court also acknowledged the limits of its own judgment by putting it in abeyance for more than a decade. Judgments on religion cannot exist in isolation, “as the case might affect another individual or sect’s right to profess, practice and prorogate the religion of their choice”, says Unnikrishnan. Sunnis of Doshipura say that the plots claimed by Shias are used by them also for various religious purposes, like Urs, namaz for mourning and an annual fair which is attended by Hindus and Muslims alike. “If you build a boundary wall, you are effectively claiming the land and their right is to perform the function, not possession,” says Ansari.

Ideally, court judgments and their implementation are considered divorced from the political climate of the day but the manner in which they are implemented or defined can be dictated by sentiments. Hence, Parliament overturned the Shah Bano judgment but in Kerala, the Sabarimala judgment allowed the ruling party to get a toehold in the state’s politics. Currently, the Supreme Court has referred to a five-judge Constitution bench the plea challenging female genital mutilation of minors among Dawoodi Bohra Muslims even as daily hearings in the Ram Janambhoomi-Babri Masjid dispute case began this week. In the case of Doshipura, both sides allege political bias depending on who has been in power in the state and in Centre over the years. Doshipura Shias have voted for the Jana Sangh and then the Bharatiya Janata Party since the 1950s and allege that the Samajwadi Party government in the state in the past has overlooked their concerns. They have had a few meetings with the current administration but still find their demands unmet. “Sometimes there are notions put forth of solving problems from within. In the case of, say, triple talaq, it is a reform that should have come from the personal law board but in [Doshipura’s] case , it is not just a matter of our right to carry out our religious practices but also a property dispute. That needs legislation,” says lawyer Firdausi.

Questions of religion, religious expressions and practices have always been an integral part of Indian society with the Supreme Court being the only space where they can be debated. Sen says that the way forward for the court is to develop a language to creatively engage with religion and religious practices, ‘going beyond the standard rhetoric on uniformity, nation building and civilized practices’. There are many who argue that the courts should recognise that certain decisions will not be accepted out of compulsion and just because a judgment has been passed does not mean it will be followed.

In Doshipura, Talbe Hasan, a loom owner who employs four weavers, recognises the sentiment very well. He is confident that one day boundary walls will come up around the nine plots as the Shia community so demands, but at the same time it is also clear that they may also be looking for an end to the conflict. His 19-year-old son Kumail is studying law at Aligarh Muslim University but is not very well-versed in the details of the case. As far as he is concerned, he would rather seek a future elsewhere than bicker over the past.

It’s been a century-and-a-half since Doshipura awaits a resolution. Compared to that, the issue of the handling of religious matters by courts and unimplementable orders is a fairly new one. However for Shias and Sunnis of Doshipura, there is no end in sight.