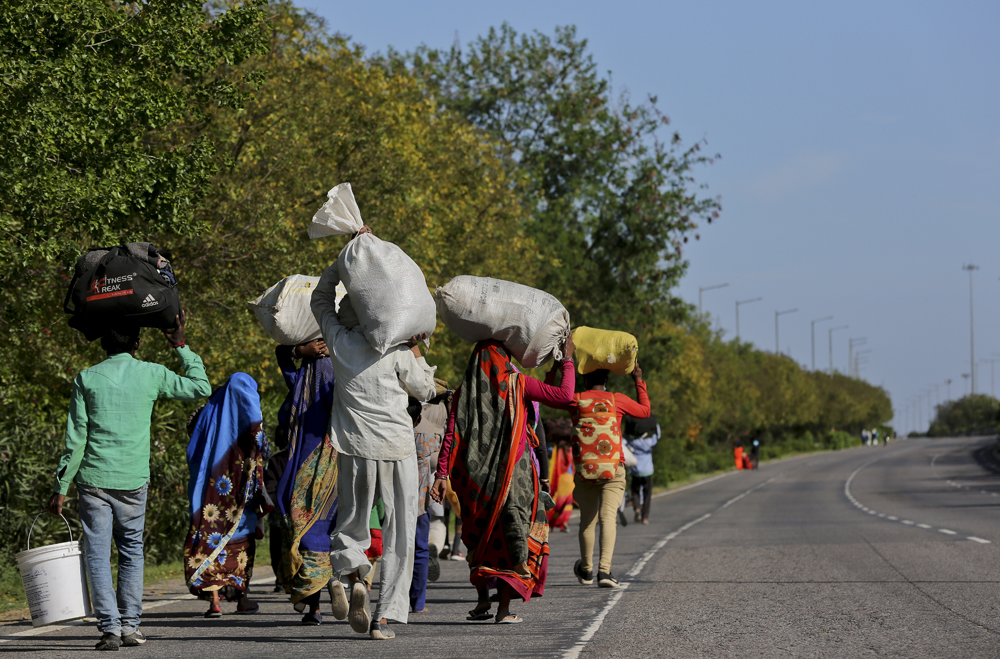 
“Stay home, stay safe” messages pour in from family, friends, strangers, online brands, banks. Outside the refuge of homes, there is stillness. Yet, amidst the silence on the highways, streets, lanes and by-lanes, are muzzled cries of helplessness. In one such place in the capital, a truck stops. A woman wearing a white t-shirt, tights, sneakers, a pink cap and black mask, along with three others, start removing bags from the back of the truck, as a police constable monitors the distribution. It was getting dark as people, several of them potters and ironsmiths, line up, repeatedly being reminded to maintain a distance, and collect a bag each.

“Each packet contains five kgs of wheat, two kgs of rice, a kg each of two types of lentils, tea, sugar, salt, cooking oil and spices. The idea is if we can feed 500 families for a week, we can stop them from leaving the city to return home,” says Anchal Sharma, for whom a jhuggi in south Delhi’s Saket was the last of around half-a-dozen trips of the day. She and her team managed to distribute 3,000 kgs of ration through the day, in a truck provided by Delhi Police.

On the capital’s borders, the number of migrants going home, following a countrywide lockdown in the fight against coronavirus, was on a steady rise. Fearing a stampede for food there, Sharma decided to directly provide ration to the poor, whose daily earnings had been halted, overnight, to stem the reverse migration.

For her, hunger is an unforgettable childhood memory. Born to an autorickshaw driver, there were days when there was hardly any food in the house. Both she and her brother had to drop out after studying up to the eighth standard at a government school, Sharma, 36, says in fluent English. “I read a lot of English books. Right now, I am reading the World’s Thousand Best Short Stories.” It was in 2017, after being detected with breast cancer, that she had started ‘Meals of Happiness’, with the help of some friends, to feed poor children.

One evening after a coffee with a friend, Sharma, who ran a real estate company, came across children begging at the Essex Farms signal. She refused to give them money, but took them to a nearby cafeteria. “The kids were very excited and wanted to try all the chutneys with the noodles. A man walked in with his son, but seeing them, decided against eating there. It reminded me of my childhood.” Meals of Happiness started with five children, and now feeds 500. After the lockdown, her organisation has given the families of the 500 children ration for a week. Besides her daily trips to slum clusters to distribute food, it has also started giving fruit bread to cancer patients to fill the gap between lunch and dinner served in hospitals.

Hers is just one of thousands of such stories of ordinary people. The lockdown, which has taken the country to a grinding halt, baring to the bones the vulnerability of the poor, has also brought out on the deserted streets several messiahs. If it has revealed the frailties of the system, it has also exhibited the fortitude to mitigate the agony, a valour no less than any other.

“Friends, family and others stop us from going out, saying we are risking carrying the infection back with us. That has been one of the biggest challenges in our work. We try to convince them that like doctors, we also need to go out to help,” says Yogita Bhayana, who has been feeding animals, starving because of the lockdown.

Driving her Hyundai Creta for four-five hours in the streets of south Delhi, she carries fruits, dog food, boiled rice, chicken and bread to feed birds, cows and dogs. Inside the Jawaharlal Nehru Stadium, she fed 50-60 dogs, after she heard that they were attacking each other in hunger. “Dogs and even cows are getting aggressive. They were dependent on restaurants which are now all closed,” says 38-year-old Bhayana, who runs a facility management company.

The Delhi Gymkhana has given its stock of chicken, wheat and raw vegetables which she and her friends distribute to migrant labourers in the city. According to her, some contractors are not paying the labourers because the builders have stalled payments. With community kitchens being organised in the city now, she is focusing on those who cannot reach them. Bhayana, a post-graduate in disaster management, has been working with victims of sexual abuse, several of whom come from families of daily wagers.

Even as governments, faced with tackling the epidemic, tried to extend help to those deprived of a livelihood because of the epidemic, hundreds of individuals left the safety of their homes to reach the needy. “Several daily wage owners eat at restaurants which are now closed. We have started a kitchen at home to feed 300 of them lunch and dinner,” says Mohd Anas, a college student. He and his friends go on bikes to distribute the food packets of rice, roti, dal and vegetable, at the doorsteps. Anas and three of his friends had started Adhikar Foundation, started in 2017 for empowerment of people with disabilities.

Around 1,000 kms north in Leh, a monk Lama Thupstan Chogyal came to the Government’s aid to help with the hospitalisation of Covid-19 cases at his Ladakh Heart Foundation. When the Government requested Chogyal to take in suspected Covid-19 patients for quarantine at his hospital, around eight kms away from the main city, he decided to shut down the OPD, and for two-three weeks, dedicated the hospital to quarantine suspected cases. Chogyal, who started the foundation to treat heart patients in 2007, kept in quarantine Leh’s first two patients and their families. Once they tested positive, they were shifted to the Government hospital for treatment. He is modest about his role in times of a health emergency. “My contribution is small. The Government took brisk and effective steps. Together, we fought it,” he says. After the first 13 Covid-19 patients in Ladakh, where it started with a pilgrim returning from Iran, there have been no more cases so far.

Chogyal, 49, had started the Ladakh Heart Foundation in 2007, after he saw how heart patients from Ladakh went all the way to Delhi for treatment because of lack of facilities there. In 1995, while awaiting his visa to go to the United Kingdom to do research in quantum physics and Buddhism, he was touched seeing several children suffering from heart ailments at the Ladakh Bodh Vihara near the Inter State Bus Terminus (ISBT) in Delhi. After helping in several ways, he finally gave up plans of going abroad and started the foundation in 1997.  By 2001, he started construction of the hospital, which now treats 500-600 patients a month for various ailments. Chogyal is happy that the road to Leh is reopening and life may soon return to normal.