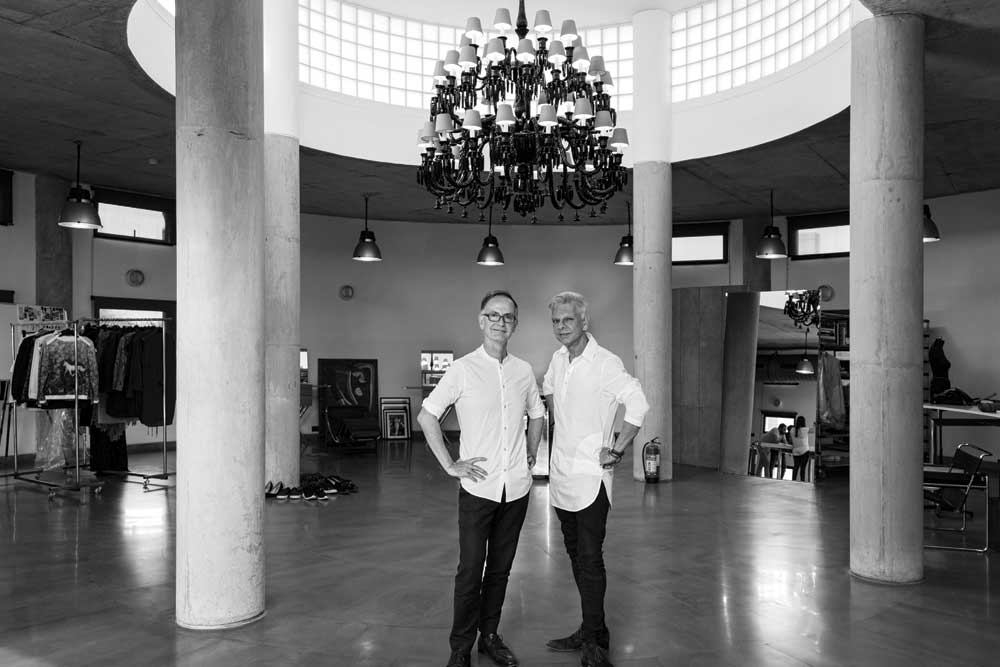 MEDITATIVE MUSIC plays in the background every morning as Hemant Sagar sits cross-legged on the floor in his Delhi home, his eight- year-old dog Devi on his lap. For half an hour, he strokes the Paris-born Jack Russell Terrier, one of his two dogs, almost continuously, their eyes closed. His soothing whispers, spoken in hypnotic intervals, lull her to sleep. I love you. It’s just you and me. We’re at peace. Everything is alright. The room is quiet, its ambient white noise benign, impersonal. Everything else fades away for Sagar and Devi in that moment. All that remains is love.

It has been almost 40 years since Sagar and his partner Didier Lecoanet set out to do what they love best—make confident clothes for dauntless women, many of them aristocrats or business tycoons. It hasn’t been quiet, though. At a time when the Indian fashion industry was poised to spread outwards—Manish Arora and Rahul Mishra would begin showing at Paris Fashion Week, and Vaishali S and Archana Kochhar at New York Fashion Week, among others—Lecoanet Hemant were a case of reverse migration: from haute couture in Paris to ready-to-wear industrialised production at a factory in Infocity, Gurgaon.

Born in Delhi to a German economist mother and an Indian lawyer father, Sagar was fascinated with the European clothing donned by his mother’s expat friends in India. That, along with a subscription to Life magazine of the late 60s and early 70s, ensured a life-long love affair with design, clothing and the construction of beauty. As a child, Sagar studied at Delhi’s German School until the family decided to move to Berlin, where he studied dressmaking and worked as a fashion apprentice. Then, fashion school beckoned. Sagar met Lecoanet, who was two years older than him, while they were both students in Paris at the Ecole de la Chambre Syndicale de la Couture Parisienne, where students are trained in the art of haute couture. They shared an instant chemistry, and decided to work together in the future.

On a holiday to a beach in Odisha, Sagar chanced upon a woman emerging from the sea, her sari drenched. “It was a sight I can never forget,” sighs Sagar, who will turn 60 this year. The construction of the timeless garment in its wet, figure-hugging avatar left him spellbound. A few years later in the early 80s, when he and Lecoanet launched their own couture label Lecoanet Hemant, it would be inspired by the sensuousness of the sari along with the techniques they had studied in Paris—a fusion of East and West. They set up shop at the swish Rue du Faubourg Saint-Honoré in Paris, one of the most fashionable destinations in the world. Fame came quickly to the dynamic duo: their list of clients included European and Arab royalty and Hollywood filmstars, some of whom dropped by without notice and bought dresses directly from the workshop. A Middle Eastern princess famously placed an order for one piece each of their entire collection. Their days went by in swathes of silk and invites to some of the most happening dos; celebrities were routinely spotted in their clothes at red carpet events. The duo won a spate of awards including The Golden Thimble (Le de D’or), the top accolade for haute couture. Their work was displayed at London’s Victoria & Albert Museum, Deutsches Historisches Museum, Mikimoto Museum in Honshu, Japan, Ariana in Geneva and the Galleria Museum of Fashion, Paris.

“You have to know women and understand their bodies, their structure, their sensibilities,” says Sagar, as he sits restlessly on the edge of his chair talking about the time of made-to-order couture and the quintessential French air about it. “Couture is a national activity in France, a very patriotic profession to be in,” he says wryly. Dressed in a tight-fitting white shirt and slim-fit trousers with bold, black checks, Sagar recalls anecdotes from the duo’s heydays in Paris without wistfulness. The label was patronised by the who’s who of global society, women who would fly thousands of miles for a fitting, and who expected immaculate detail and design, especially when they were paying hundreds of thousands of dollars for one gown. Besides an obsession with perfection, the designers also required presence of mind. In one instance, a Syrian billionaire’s daughter hired them to make her a wedding dress. When she arrived a few weeks later, she was dismayed to see it was made in white silk and lace—an exquisite creation, but nevertheless white. “I didn’t want white!” she cried, upset because her wedding was just days away and there was no time to make a new gown. “Come back tomorrow,” Sagar told her. The next day, she was astonished—and delighted—to see the same gown in an unusual shade of blushing beige. Sagar had dipped it in tea water.

“You can do that in couture,” he says matter-of-factly, contrasting it with their current enterprise, which is ready-to-wear and requires more industrial precision and standardisation. Sagar has a business man’s pragmatism, accepting the realities of the time and the need to move on and keep evolving. “By the late 90s, things became difficult. Paris became a traffic jam of fashion designers; buyers no longer wanted to invest so much in clothes when there were plenty of other ways to display one’s wealth,” he says. And so the duo embarked on the second phase of their life. In 2000, they moved to Delhi, Sagar’s birthplace, to begin a career in prêt. The duo thrive in the clash of cultures and their identity as outsiders: Asian in Europe, European in Delhi. “We were the yin and yang in France. We are the yang and yin in India,” jokes Sagar, who is fluent in six languages.

“People in India are fashion conscious, yes, but they also believe they are hurting the sensibilities of their elders by dressing in modern clothes” – Hemant Sagar

The fashion industry in India around the turn of the century was still unorganised and Sagar and Lecoanet saw plenty of potential— not just in terms of marketability but also sourcing of the finest raw materials and drawing on an age-old artisan community. They set up a huge production unit over 100,000 sq ft in Gurgaon, and began making state-of-the-art fashion in standardised sizes. “We went from artisanal to industrial, while still retaining couture techniques,” says Lecoanet, who is surprised at how top fashion brands and clothing companies treat craftsmen and tailors. Despite their products being sold in showrooms to the urban rich, garment-makers continue to be one of the lowest paid blue-collar workers in India. Nearly 92 per cent of the Indian labour- force involved in social and personal services is unorganised, and has to contend with poor wages and dismal working conditions. As a company, Lecoanet Hemant ensured an organised system by hiring 250 to 300 people, of whom 54 per cent are women, and focused on preserving traditional knowledge while developing systems with cutting-edge technology. The production unit has been certified by Worldwide Responsible Accredited Production, a non-profit dedicated to promoting safe, lawful and ethical manufacturing around the world, and by Supplier Ethical Data Exchange, a non- profit based in London, UK.

Exposure to Indian workers and customers opened their eyes to the realities of Indian society. “The female voice is not free yet,” says Sagar. “This is despite the fact that the ambient Indian way is feminine since it is women who almost exclusively do the child-rearing.” He believes that due to the double whammy of arranged marriage and the caste system, most Indians have a pessimistic outlook and believe that they have no choice. “Couples hardly know one another even after marriage. The terrified mother brings up her son as the ruler of the world,” he says, citing examples of entitled, chauvinistic men who snap fingers at restaurant waiters, and the hypocrisy he has encountered in Delhi’s high society.

“No one admits but everyone is in a rat race to be the oldest in the family. The system needs to be analysed,” he avers. Even so, he loves the city, he says, especially Lutyens’ Delhi which reminds him of his idyllic childhood, and says that the couple have accepted their boundaries in terms of work and lifestyle. “People here are fashion conscious, yes, but they also believe they are hurting the sensibilities of their elders by dressing in modern clothes. So they stick to traditional garments for family events. But certain sections of society are beginning to choose new silhouettes and designer-wear now,” he observes.

The designers participated in fashion weeks from time to time but largely developed their own retail strategies in ready-to-wear. For the past seven years, they have been certified sub-contractors for French luxury labels Chloe and Balmain. They held their first solo show ‘Red Carpet’ in Mumbai in 2010, a collection inspired by the sari that featured fabric such as rugged and raw silk, leather, satins and printed organza along with details like feathers, sliced furs, embroidery inspired by bees, and the texture of falling rain. In 2012, they launched a line of neon-coloured nubuck-leather and rubber accessories, priced from Rs 2,700 to Rs 18,000. In 2013, they launched their first line of denim called Genes, which later became the brand’s prêt line. The same year, they unveiled a collection of sculptures titled Luminocity for the opening ceremony of Bonjour India 2013 held at Jantar Mantar in Delhi. The light installations, comprising eight main outfits along with 12 smaller ones made in translucent fabrics, were inspired by Indian mythology and astronomy. Earlier this year, a retrospective of Lecoanet Hemant’s four decades in fashion was held in Delhi, with 40 pieces on display, some of which dated back to the 1980s and 1990s made in Paris, and others made in their Gurgaon atelier from 2000 onwards.

The intersection of heritage, technology and fashion is very exciting for the duo. They are currently working on a beauty range, and have launched a wellness clothing line called Ayurganic, which goes through a supervised cycle of production based on ayurvedic principles. The collection uses natural dyes on Global Organic Textile Standard-certified cotton fabrics sourced from Gujarat, which are infused with essence of plants prescribed by ayurvedic doctors. The herbs and fibres are not exposed to any chemicals during the production process, and leave no ecological damage, says Lecoanet. The garments are meant to be worn at home, especially while meditating, so that the wearer breathes in their benefits.

Though he always looks for beauty everywhere, looking inwards has become a preoccupation for Sagar these past years. “I love God but not his fan clubs,” he says in half-jest. Belying his age, Sagar is full of energy, waving his hands animatedly as he describes something or leaning forward in his chair with youthful curiosity. Forty years of passion and persistence must do that to you.