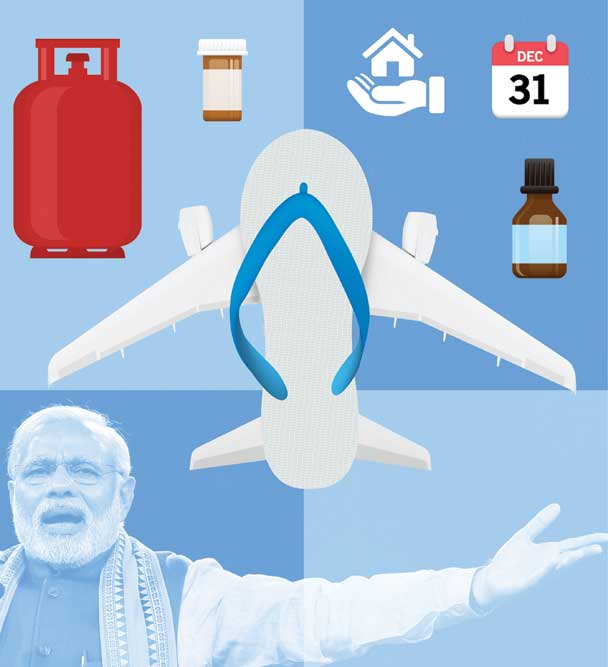 ON APRIL 27TH, Prime Minister Narendra Modi was in Shimla to flag off three new flights under the Regional Air Connectivity Scheme. The scheme, named UDAAN— Ude Desh Ka Aam Nagrik, will connect places hitherto unserviced by commercial aircraft. There is also a cap on the ticket price—Rs 2,500 for up to 500 km. At first glance, this looks like any other government scheme, but a deeper thought underpins it. “I want to see people who wear Hawai chappal in a hawai jahaz,” Modi said in his speech in Shimla. The scheme is a way of reaching out to this section of people for whom air travel is still a luxury.

Come May 26th, the Modi Government will celebrate its third anniversary. Preparations are in full swing and different ministries are working on their annual report cards to be presented before the country. The past year has indeed been a defining one for the Government. Major reforms, including the GST Bill, FDI reforms, demonetisation and the Real Estate (Regulation and Development) Act 2016, have been set in motion with much stagecraft. But there have also been other reforms that haven’t made the news as often, and small changes that reflect the current Government’s idea of India and its approach towards it, points out Rajiv Kumar, senior fellow at the Centre for Policy Research and former secretary general, FICCI. “Of course, the GST is a reform the country was waiting for and the credit goes to the current Government,” he says. “But there are many other things where the Centre is taking the top-to-bottom approach, deviating from how governments usually function.”

“At the core of all the initiatives taken under Prime Minister Modi is an effort to reach out to people at the bottom of the pyramid as some of them still don’t get the benefit of the services offered,” says Ravi Shankar Prasad, minister for IT and Law. “Be it Jan Dhan accounts or Aadhaar, the schemes echo the PM’s mantra, Sabka Sath Sabka Vikas. A parallel digital revolution is enabling people to get government services at their doorstep, eliminating the human interface and ruling out corruption.” All policy directives come from the Prime Minister himself and it is left to the ministries to execute the decisions. Being the face of the Government, Modi likes to apprise the people of the initiatives he takes, including some bold steps that can make or break his Government’s record and reputation. “Three years ago, when the Modi Government took charge, it was seen as pro-business in the wake of amendments in the Land Acquisition Bill,” says Jagannadham Thunuguntla, head of fundamental research at Karvy Stock. “The Government has completely changed that perception now. Even strong critics would admit that for the first time, a government is not only talking about inclusion but is actually doing it on the ground,” he says. “Big bang reforms grab the headlines but subtle changes in the delivery mechanism go beyond that.”

Here is an example of how the Government is ushering in these subtle changes. On April 18th, while addressing a public meeting in Surat, Modi stressed the need to rationalise medical prescriptions. “Doctors write prescriptions in a way that poor people don’t understand. And patients are forced to buy the medicine from a private shop at higher prices than a generic drug would have cost. We will bring a legal framework by which doctors will write prescriptions that allow people to buy generic medicine at cheaper prices,” he said. The Medical Council of India (MCI) had issued a directive in 2016 guiding doctors to write prescriptions with generic medicines. After Modi spoke of it, the MCI once again asked medical practitioners to ensure rational prescription, failing which, it warned, disciplinary action would be taken. The measure comes as a huge relief for the poor. “A country-wide campaign has begun to ensure availability of quality generic medicines at affordable prices to all under the Pradhan Mantri Bharatiya Janaushadhi Pariyojna (PMBJP). It covers more than 600 medicines and 154 surgicals and consumables,” says Hansraj Gangaram Ahir, Minister of State for Chemicals and Fertilisers. “Under PMBJP 861 Pradhan Mantri Bhartiya Janaushadhi Kendras [PMBJKs] have been opened across the country. The target is to open 3,000 such centres.”

Modi likes to apprise the people of initiatives he takes, including bold steps that can make or break his Government’s reputation

“Reforms like this are critical to Modi’s promise of governance for the people,” says Rajiv Kumar. “In a market-based economy, inequalities among people are bound to rise. The Government is not ignoring the middle class either. Take the Employees’ Provident Fund. Earlier, withdrawals were not permitted until the member had deposited money for seven years and even then, he or she couldn’t withdraw more than 50 per cent. In April this year, the Labour Ministry amended the law to make a provision by which a person can withdraw 90 per cent of the amount after three years of deposit to pay back a home loan. Also, EPF withdrawals for medical treatment won’t need any medical certificate; a self-certification by the member would suffice. “There have been times when people had money in their EPF accounts but were not able to make use of it for medical treatment because of the hassles involved,” says Bandaru Dattatreya, Union Labour Minister. “We have just simplified it. Very soon you can withdraw your EPF by sending a message from your mobile phone.”

Experts working with the Government on reforms say these seemingly minor reforms are a way of bringing about systemic change in tandem with large scale ideas. Bibek Debroy, senior economist and member, Niti Aayog, who is working on reforming labour laws, says it is an ongoing process of rationalisation and harmonisation. “For instance, there are certain labour laws, like the 1855 Fatal Accidents Act, which are very old. There is a need to bring them up to date with the current market conditions,” he says.

A strong political will is a must for correcting anomalies in the existing set of rules. Earlier governments did not have a strong mandate or were not interested to take up this task. “The good thing about Modi is that he takes bold decisions and convinces people to follow them,” says Thunuguntla. “Getting the well-heeled to give up the LPG subsidy, for instance, could have backfired electorally, except it was a resounding success.” “The move has benefited villages, and therefore they feel included in the process. The whole debate that reforms have a political cost is dissipating,” said Finance Minister Arun Jaitley at a recent event in a private bank.

When Modi first appealed to the people to give up their LPG subsidies, questions were raised about how the money would be used. On May 1st, 2015, he launched the Pradhan Mantri Ujjwala Yojna to provide free LPG connections to the poor. “We had set a target of 15 million connections to be distributed under the scheme in one year,” says Dharmendra Pradhan, Petroleum Minister. “But we have surpassed the target and given 22 million connections. It has become a social movement, with beneficiaries coming forward in large numbers to apply and get cylinders installed.” Pradhan further says that while MNREGA was a scheme targeted at livelihoods, Ujjwala is targeted at aspirations for a better life. “About 85 per cent of these new consumers have come back for a refill, which shows they are willing to upgrade their lifestyle and adopt things that would be good for their health and environment,” he adds.

Demonetisation, which came as a major jolt to the economy is another example of Modi’s vision. Following close on its heels, the Union Budget was advanced to the last week of January. Usually, budgets presented in February would get passed through both the Houses of the Parliament by mid-May. An early budget gives the Government some time before the monsoon to release funds and execute development works. The Government also formed a committee under former Chief Economic Adviser Shankar Acharya to do a feasibility study of changing the financial year from April-March to January-December. On April 23rd, Modi addressed the third meeting of the Niti Aayog governing council, where he urged states to shift to the new fiscal year. Madhya Pradesh has already announced its move to the January-December cycle.

The schemes do yield political dividend for Modi and the BJP. Out of 22 million Ujjwala connections, around 5.5 million were distributed in Uttar Pradesh. This played a major role in the party’s victory in the state, where it made inroads into SC/ST votes, considered the preserve of the BSP.

Through big bang reforms or efficiency tweaks, Modi ushers in change and then demands support in return. And he has not been disappointed.