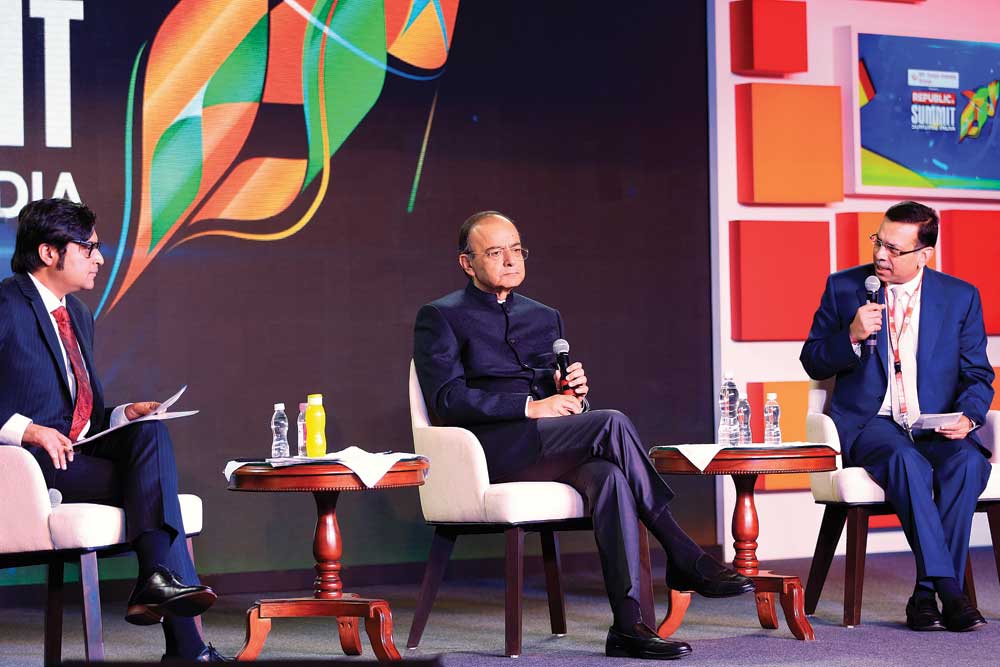 THE BJP-LED GOVERNMENT has lately had a mix of good and bad news on the economic and electoral fronts, and with the resignation of former Reserve Bank of India Governor Urjit Patel having put the governance of the country’s economy back in the spotlight barely six months before a general election, curiosity of what’s on the ruling party’s mind has rarely been so high. At the Republic Summit 2018 held at the Trident Hotel, Mumbai, hours after Prime Minister Narendra Modi announced a GST relief package for top-rate items, Finance Minister Arun Jaitley found himself speaking candidly on several issues that confront the Government. In an evening session on December 18th, he was in conversation with Sanjiv Goenka, chairman of the RP-Sanjiv Goenka Group (of which Open is a part), and Arnab Goswami, editor of Republic TV channel. Goenka concentrated on the Government’s handling of the economy over the past few years, while Goswami asked Jaitley questions on politics. However, given that some of the Centre’s biggest decisions have been economic, from demonetisation and GST implementation to the alleged spat with the RBI, the line between economics and politics was bound to be thin.

According to the Finance Minister, one of the top achievements of the Government has been a restoration of credibility in the Indian economy, strengthened by a sound set of policies. “When we started taking steps, [critics] said ‘These are incremental steps’,” said Jaitley, “When we took major steps, then the same people came up with an alternate logic: ‘Is India prepared for these major steps? Are you just too ahead of the time?’”

To Jaitley, what is crucial is ensuring this momentum he speaks of isn’t lost. He said if a market economy with a social conscience is to be established in India, where some amount of fairness and justice emerges in our social and economic order—like pulling out millions of people from poverty and giving them the basics of a decent life—then it’s important that people are not made to rely on empty slogans. “What happened [in the past] was people got slogans decade after decade,” he said, “This time, they got resources. And these have come because the economy acquired the strength to pass on those resources to them.” Jaitley was also candid about the challenges that lie ahead, either for him or any other party that takes on the mantle. “I think there is a sense of satisfaction. But there is also a sense of impatience that this is not enough, because you need to grow at this pace or at a faster pace in the years to come and keep this model going to see a better country,” he said, speaking on the eve of Niti Aayog’s release of its ‘Strategy for New India @75’ that aims to expand the economy to $4 trillion by 2022-23 by raising exports, the investment rate and the tax-to-GDP ratio sharply while the RBI keeps inflation within its target band of an annual 2-6 per cent.

After the recent state election results, some political commentators have begun to consider the possibility of a coalition coming to power next year, either one with the BJP in a reduced majority or one with the Congress at the helm. Jaitley said he did not think that a poor BJP showing in these polls meant the party will be less successful in 2019. “A mistake a lot of us make at times is that we look at every election in terms of arithmetic. Simple arithmetic will tell you an alliance of eight people is better than one of three people. But elections, particularly to the Lok Sabha, are not just about arithmetic. The chemistry of voters is far more important. Voting in general elections is serious business. And therefore people will always consider that here [in Modi] is a leader who is decisive, a leader who has provided India with clean governance and set a course for how India must grow. On the other hand, you have a combination of disparate forces—I call it a coalition of rivals. You can’t with a combination like this fool all the people all the time. The voter is cleverer than you and me.”

“People will always consider that Modi is a leader who is decisive, a leader who has provided India with clean governance and set a course for how India must grow” – Arun Jaitley

In the past few months, there has been intense scrutiny of the reported rift between the Government and the RBI, resulting eventually in Patel’s departure a few weeks ago. Neither Patel nor Jaitley had publicly commented on it, but the impression grew that the Centre was trying to contain the autonomy of the central bank in an attempt to arm-twist the regulator not only to relax lending restrictions on banks, but also transfer some of its reserves to the Central exchequer for pre-poll spending on schemes that would give it a political advantage.

Goenka prodded Jaitley to open up on these issues, asking what he thought of the recent suggestion to reduce interest rates by the Principal Economic Advisor and the accountability of autonomous institutions in India. Interest rates, Jaitley claimed, had never been a major issue between the RBI and the Government. “It’s only when US rates started hardening that the RBI twice increased its policy rate. Many people say—considering that our inflation was close to 2.3 per cent last month, and even if we assume it to be 3 per cent now—that the difference between the policy rate and inflation rate is a bit too wide. I’m sure RBI will take that into consideration next time,” said the Finance Minister.

The issue, according to Jaitley, was not about RBI reserves but of liquidity in certain sectors of the economy and the availability of credit. Institutions such as the RBI need to be independent, he said, but they can’t be “isolationists”. They need to consult all stakeholders to get a feel of the market. “I say ‘I have read some books, some data, research papers, statistics and I’m forming an opinion.’ But empirical evidence in the market will be entirely different. [On] the recent debate about me in particular and the central bank, I always said I respect their autonomy. In fact, I said that it is my responsibility to tell you there is a liquidity problem. Because you are autonomous and independent, I am telling you to resolve the problem. Telling them what the problem is doesn’t compromise their autonomy. All these institutions must be autonomous, but never isolationists. [Otherwise], there is a fair chance they will go wrong.”

The Government’s aim, according to Jaitley, is not to raid the central bank’s cash reserves, as some have suggested. “I don’t want any money from the RBI reserves at the moment,” he said. But Jaitley did put forth the need to question the size of reserves India’s central bank actually needed. “[According to former Chief Economic Advisor] Arvind Subramanian, the RBI has more money as reserves than any other central bank in the world. All the Government said was ‘Let’s form an expert committee of people who know the subject on how much the [central bank] requires. Arvind’s suggestion is that all the surplus should be given to [undercapitalised] banks as additional capital. Now, this is an academic issue. At the end of the day, this capital, how much is required and how it is to be used [calls for] at least some discussion.” Jaitley pointed to several committees in the past having looked at such issues, with a panel in 2013 finding a surplus of nearly Rs 1.5 lakh crore that it suggested be passed on to the Government.

How could an accountable government, Jaitley asked, not react to these issues? “When the RBI was indifferent to the then [Congress- led] Government about interest rates, the then Government said, ‘Well, I have no option but to walk alone.’ I don’t think if you want to run a country effectively a defeatist attitude will do. When you walk, other decision-makers also have to talk with you, and then they walk either partly or fully with you. Or you walk with them on an agreed consensus,” he said.

Jaitley said there was never a breakdown of the relationship with the RBI and that the Government had used every instrument available to force a discussion on the issue of liquidity and credit until the RBI responded. “I was in constant communication with [Patel]. We had the best of relationships. Even after he offered his resignation, I’ve been in communication with him. This is not a personality or personal issue,” he said.

Pressed on it, Jaitley said the best words on this matter were spoken by Jawaharlal Nehru. In 1957, when his Finance Minister TT Krishnamachari objected to RBI Governor Benegal Rama Rau’s increase of stamp duty in its monetary policy, Rau wrote to Nehru offering to resign. “Panditji replied, ‘Well, you are the Central Bank. You have to fix monetary policy; economic policy is decided by me. And your other policies have to be in support of my economic policy’,” Jaitley said, citing the exchange. “And therefore, Panditji said, ‘If you say you have no option but to resign, then I’m afraid there’s no advice I can give to you’.”