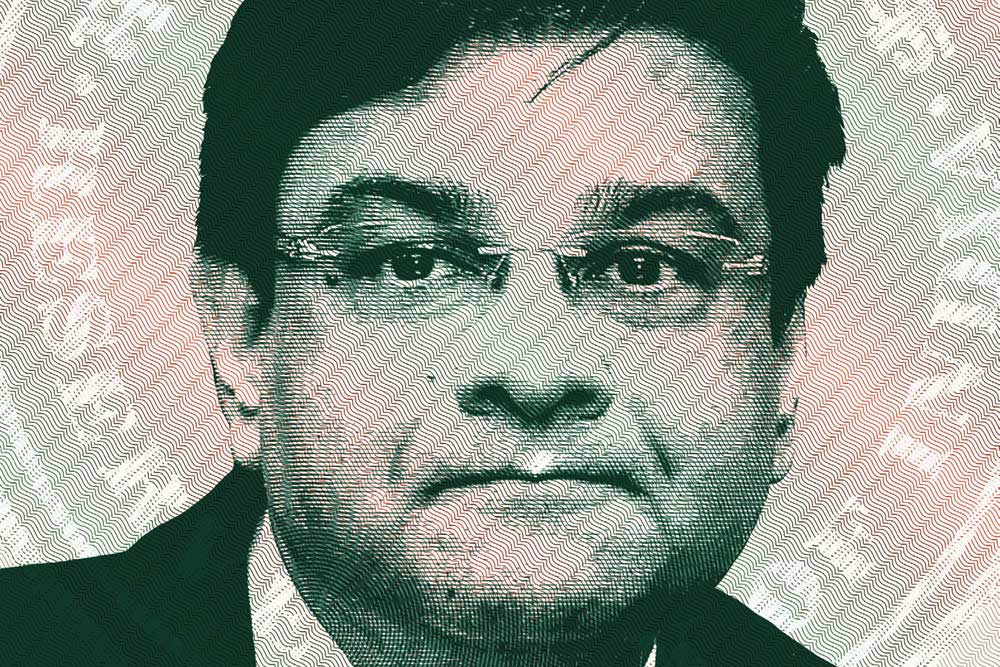 The last Friday in October this year will remain infamous in India’s institutional history. It was a day that kicked-off a showdown between the Union Government and the Reserve
Bank of India (RBI) after the Bank’s Deputy Governor Viral Acharya tore through the
Government in the course of a speech in Mumbai. He warned that any government that
did not respect the independence of a central bank would incur the wrath of markets.
Within no time, it led to a furore in policy circles in the country who decried the attempts
to “rob” the central bank of its independence. Soon afterward came the controversial
resort to an unused power by the Union Government that allows it to issue directions to
the RBI. In the days that followed there was intense speculation—and perhaps an even
greater degree of egging on—that RBI Governor Urjit Patel would “resign soon.” The
debate soon degenerated into one about erosion of institutions and their autonomy at
the hands of the current Government.

At the heart of the controversy, though, lie a set of issues that are more economic than
political in nature. For one, in April this year, 11 out of 21 listed banks owned by the
Government were placed under the RBI’s ‘Prompt Corrective Action Framework’ that
restricted their ability to lend. The PCA framework is a list of three technical trigger
points that kick in once a bank has seen deterioration in its financial health. Then, there
is the matter of restructuring loans to the power sector following a judgment of the
Allahabad High Court earlier this year. In fact the ‘suggestion’ to use Section 7 of the
RBI Act, 1934 that allows the Government to issue directions to the central bank
emerged from this judgment.

The idea, from the Government’s perspective, is not new. In the Economic Survey
2016-17, it was explicitly mentioned that these reserves could be a source of capital to
re-capitalise debt-ridden public sector banks (PSBs) through a Public Sector Asset
Rehabilitation Agency (PARA). The Survey noted that, ‘The RBI would (in effect)
transfer some of the government securities that it is holding to public sector banks and
PARA. As a result, the RBI’s capital would decrease, while that of the banks and the
PARA would increase. There would be no implication for monetary policy, since no new
money would be created.’

The Survey, authored by the then Chief Economic Adviser (CEA) Arvind Subramanian,
argued extensively why such a transfer from the RBI would not pose any problem for
the central bank. The key point being that, ‘There is no particular reason why this extra
capital should be kept with the RBI. Even at current levels, the RBI is already
exceptionally highly capitalised. In fact, it is one of the most highly capitalised central

banks in the world. So, it would seem to be more productive to redeploy some of this
capital in other ways.’

ut in the furore after the speech by Acharya, the Government denied that it was
planning to ask the RBI to transfer some of these reserves. Last Friday, Economic
Affairs Secretary Subhash Chandra Garg issued a series of tweets in which he said
that, “Lot of misinformed speculation is going around in media. Government’s fiscal
math is completely on track. There is no proposal to ask RBI to transfer (Rs) 3.6 lakh
crore or (Rs) 1 lakh crore, as speculated…only proposal under discussion is to fix
appropriate economic capital framework of RBI.” He highlighted that the Government’s
fiscal deficit in 2013-15 was 5.1. From 2014-15 onwards, the Government succeeded in
bringing it down substantially and that 2018-19 will end with a fiscal deficit figure of 3.3
per cent. In the controversy after Acharya’s speech, it had been speculated that the
transfer of reserves may be used to cover up the fiscal deficit in case the Government
was not able to stick to its budgetary arithmetic, in effect monetising the fiscal deficit.
In the ‘kiss of death’ speech, Acharya quoting Rakesh Mohan, a former deputy governor
of RBI, had mentioned three points. One, the longer-term fiscal consequences (of such
transfers) would be the same if the Government issued new securities today to fund
expenditure and would only provide an illusion of free money in the short-term. Two, the
use of such a transfer would erode whatever confidence that exists in the Government’s
intention to practice fiscal prudence. Three, in theory, a central bank can implement
monetary policy appropriately with a wide range of capital levels, including below zero.
In practice, the danger is that the central bank may lose credibility with the financial
markets and the public at large, and may then be unable to attain its objective if it has
substantial losses and is seen as having insufficient capital.

These points form the economic core of the stand-off. Each side has merit in its claims
but it is worth pointing out some issues. Consider point two. Given India’s political
economy and the history of government spending in the last year, markets for the most
part price in such deviations from fiscal deficit targets. The question whether
governments should deviate from the budgeted target is, of course, different and has
the potential to affect inflationary dynamics. Similarly, on point three, the Government
had a different answer as spelled out in the Economic Survey 2016-17 where an
elaborate exercise was carried out to answer the question: ‘Would there be adequate
buffers after such a reduction in RBI’s capital?’ The Government’s answer was in the
affirmative while RBI functionaries dispute that.

After tweets by Garg, it is clear the Union Government plans to pursue the issue of
economic capital framework with the central bank, quite possibly on the 19th of this
month itself when the central board of governors of the RBI meets. In simplified terms,
the economic capital is the requirement on part of the central bank to meet risks and
unforeseen eventualities in the future. This has acquired an even greater salience after
the 2008 financial crisis when all that stood between a worldwide meltdown in financial
markets and a return to safety were central banks. One reason for RBI’s caution in
maintaining large reserves—beyond what the Government thinks is prudent—are these
unforeseen risks. If these risks do materialise, then it is the RBI that will have to do the
heavy lifting of maintaining financial stability.

In the end these technical/economic issues have been interpreted somewhat wildly in
political terms. For example, much of the debate is now couched in terms of RBI’s
autonomy/independence. This is a distinct domain and somewhat separate from the
issues under debate. The matter would not have arisen had the controversy about the
use of Section 7 of the RBI Act, 1934 not kicked in. Section 7(1) provides that ‘The
Central Government may from time to time give such directions to the Bank as it may,
after consultation with the Governor of the Bank, consider necessary in the public
interest.’ This is the first time the Union Government has used this power in the history
of the bank. The action has been interpreted as ‘eroding’ RBI’s autonomy. The facts are
more complicated.

Right from the start of its existence until 1997, monetisation of government deficits by
using treasury bills was a normal feature of managing public finances in India. If there
was a mismatch between the government’s revenue and its expenditure, this was met
by simply issuing these bills and getting the money to cover the gap. This is a system
that is frowned in any autonomous/independent central bank as it renders the latter a
mere adjunct of the treasury. The idea of running a monetary policy was thought as
quaint during India’s socialist/statist years. Instead what operated were ‘credit policies’
designed to meet the requirements of the government and two-bit market players during
the year. On 26th March, 1997, as a modernising imperative, the then governor of RBI,
C Rangarajan, and the finance secretary, Montek Singh Ahluwalia, signed an
agreement to end the ad-hoc use of treasury bills to monetise deficits and created a
new system of Ways and Means Advances (WMA) to bridge the Government’s
temporary liquidity problems. The ‘autonomy’ of the Indian central bank effectively dates
to that time.

The institutional matrix of the relations between the Union Government and RBI is thus
very quaint: On paper, the Government is well within its powers to ‘issue instructions’ to
RBI. It is in practice that over time, the central bank has created an autonomous space
for itself to have the necessary room to manage the Indian economy. This position was
reiterated by the Government some days after the present controversy ensued, albeit in
a somewhat loosely drafted note where it accepted the necessity of having an
autonomous central bank. If anything, the Agreement on Monetary Policy Framework
(signed between the Union Government and the RBI on 20th February, 2015) and the
later formalisation of the Monetary Policy Committee (MPC) in the Finance Act, 2016,
shows the intention of the Union Government to reform and modernise the monetary
policy framework. If anything, these steps strengthened the autonomy of the RBI.

These changes did in fact constrain the Government in one domain: the usual tug-of-
war approach to setting policy rates finally came to an end in 2016. Since then, there
has not been any known instance where the RBI’s decisions in this area have been
questioned by the Government. The use of Section 7 of the RBI Act has been viewed as
a norm-changing act. In reality, the Government is concerned at the flow of money into
certain sections of the economy and wants the RBI to loosen the PCA framework that
seems to constrain banks from lending. This is a contested arena that falls in a different
domain—the ownership and regulation of Government-owned banks. The ideal way out
of this controversy would be for the bank and the Government to sit quietly behind

closed doors and resolve their differences. A public spectacle has the strong potential to
damage confidence in the Indian economy.

The curious case of Urjit Patel