A Term in History

What does a chief economic advisor do? Arvind Subramanian remembers those momentous moments 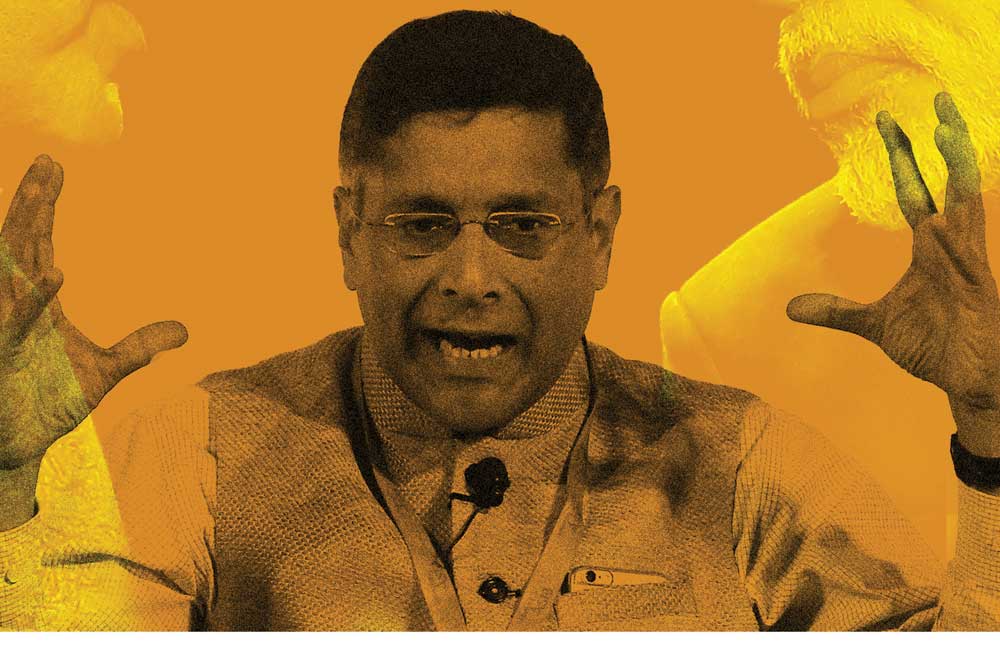 I WAS IN MACHU Picchu, the site of the spectacular, isolated ruins of the Incan civilization in Peru, when I first received an email in July 2014 asking if I’d be interested in the job of Chief Economic Adviser (CEA) to the Government of India. I was surprised, for I had no connections with anyone in the newly formed National Democratic Alliance (NDA) government. However, the prospect of working for a government with a decisive mandate, committed to reviving an economy wracked by slowing growth, rising macroeconomic troubles and corruption scandals, was unimaginably exciting.

I flew to Delhi a few days later and had encouraging meetings with Finance Minister Arun Jaitley, and Nripendra Misra, Principal Secretary to the Prime Minister. A few weeks later, the Indian media reported that I had been appointed the CEA; even The New York Times carried a long article on me. But from the government itself I heard nothing—for another two and a half months. I witnessed the media speculation silently, with as little real information as any of the speculators. I felt a bit like Mark Twain: ‘The news of my death [read: appointment] has been greatly exaggerated.’

The delay, I was later told, arose partly because the nativist sections of the ruling party were opposing me, claiming I had indulged in anti-national activities. According to the Twitter trollers, my crime was that I had testified to the US Congress, inviting—even goading—the US to take action against India. The irony was that my testimony was actually aimed at protecting India, preventing the US from naming it as an offender on intellectual property issues. The bigger irony was that I had succeeded in my task, for which the then Indian ambassador in Washington, S. Jaishankar, duly thanked me. Eventually, I was appointed the CEA in October 2014, although the charge of being mentally un-Indian would come up occasionally during my tenure.

I left my job four years later in July 2018. My dream boss, Arun Jaitley, announced my departure while in quarantine after a major surgery, in a deeply moving Facebook post titled ‘Thank you, Arvind’. Soon after, a number of my younger colleagues— Team CEA, as they called themselves—came with their spouses to New Delhi’s Indira Gandhi International Airport, where they bid my wife and me a teary farewell.

Dramatic beginnings and emotional endings bookended my nearly four-year tenure as the CEA. It was the best, most exciting, challenging and fulfilling job I have ever had—and probably ever will.

ONE OF THE RESPONSIBILITIES Of having been a privileged witness to history is the need to record for future historians the events and debates, actions and reforms of these years. In that way, I can also leave behind a record of my own contributions and failures. Accordingly, this book brings together my writings and reflections during (and since) my four years as the CEA.

I suspect that retrospective assessments of these years will accord demonetization an obsessive primacy. Fair enough. Posterity has its prerogatives that the present cannot pre-empt. But in economic policymaking terms, a lot more happened (and did not happen), which posterity should not be allowed to forget. It must have the full picture, the comprehensive inputs, or to quote Salman Rushdie, ‘not a piece of blubber but the whole wretched whale’.

Not that the imperial spaces encompassed within Herbert Baker’s awesomely symmetric domes of North and South Blocks, flanking Raisina Hill in Lutyens’ New Delhi, don’t lend themselves to these shadier pursuits. Perhaps they are the very stuff of power.

However, the theory of comparative advantage dictates that recounting these juicier tales is best left to others: gossip columnists, Twitter trollers and screaming TV anchors who holler to their multi-screen pundits: ‘no more than two people [talking] at the same time’. Meanwhile, economists should focus on economics.

My dream boss, Arun Jaitley, announced my departure while in quarantine after a major surgery, in a deeply moving Facebook post titled ‘Thank you, Arvind’

First, it might be useful to explain what a chief economic adviser actually does. In the public’s eye, the role of the CEA is straightforward: it is, as the title suggests, giving the government economic advice. And this is indeed what I thought when I took office.

In fact, however, the CEA has no clear job description. The happy (or dirty) secret is that not much is actually required of him (unfortunately, there have been no women occupants of this job yet). The only requirement is to produce an annual economic survey reviewing the Indian economy—and that work can be delegated, should the CEA so wish.

Similarly, any involvement in policymaking is pretty much the result of the CEA’s own temperament and inclinations, whims and idiosyncrasies, efforts and relationships. There is no real obligation on anyone, anywhere in government, to consult the CEA on any policy issue. As a result, the CEA is only as useful and effective as he makes himself, or is perceived or called upon to be by other key players in the system.

In my case, I had big ambitions for my job and role. I wanted to be involved in all aspects of economic policy within and outside government. I possess a manic energy, bordering on insanity, which makes me think (probably self-delusionally) that I can juggle many balls at the same time, contribute many ideas, and in the famous characterization of Isaiah Berlin, be both fox and hedgehog. I felt I had been given this one-time opportunity that I wanted to seize and not squander.

I also felt acutely aware of how much had to be done to address India’s challenges: to transform a low-income economy into a prosperous middle-income country with all groups partaking of that prosperity in a way that would make the various divisions of caste, gender, religion, language, location and class melt away, or at least become less salient. And like all policymaking economists, I believed in Keynes’s famous observation that it is ‘ideas not interests’ that shape the world, so it followed that the institution of the CEA was uniquely positioned to help in India’s development transformation.

I also felt I needed to live up to the tradition of the office. Every Indian economist who has even a shred of policy pretension aspires to this job. Some covet it ferociously. I was lucky enough for my dream to be fulfilled, an interloper appended to a lineage of illustrious giants who built the foundations of India’s economic policy framework, going back to I.G. Patel, V.K. Ramaswamy, Manmohan Singh, Ashok Mitra and Bimal Jalan.

In my old office room in North Block, squeezed between portraits of Rabindranath Tagore, Mahatma Gandhi and Jawaharlal Nehru, there is a board listing the names of my predecessors. Whenever I looked at it, I was reminded of the Patek Philippe advertisement: ‘You never actually own a Patek Philippe. You merely look after it for the next generation.’ As the CEA, I saw myself as the custodian of a sacred tradition. I felt responsible for upholding it honourably—and, at the same time, was petrified of debasing it.

This sense of tradition and continuity was reinforced strongly when Haseeb Drabu, the former finance minister of Jammu and Kashmir, informed me that the first Economic Survey was presented in Parliament by Pandit Jawaharlal Nehru. I felt blessed to be part of anything to do with one of India’s nation builders, a figure of world history. I was not going to forgo my opportunity to occupy a place, even if only as a footnote, in India’s economic history.

(This is an edited extract from Of Counsel: The Challenges of the Modi-Jaitley Economy, by Arvind Subramanian (Viking; 347 pages; Rs 699)