The Day of the Goddesses 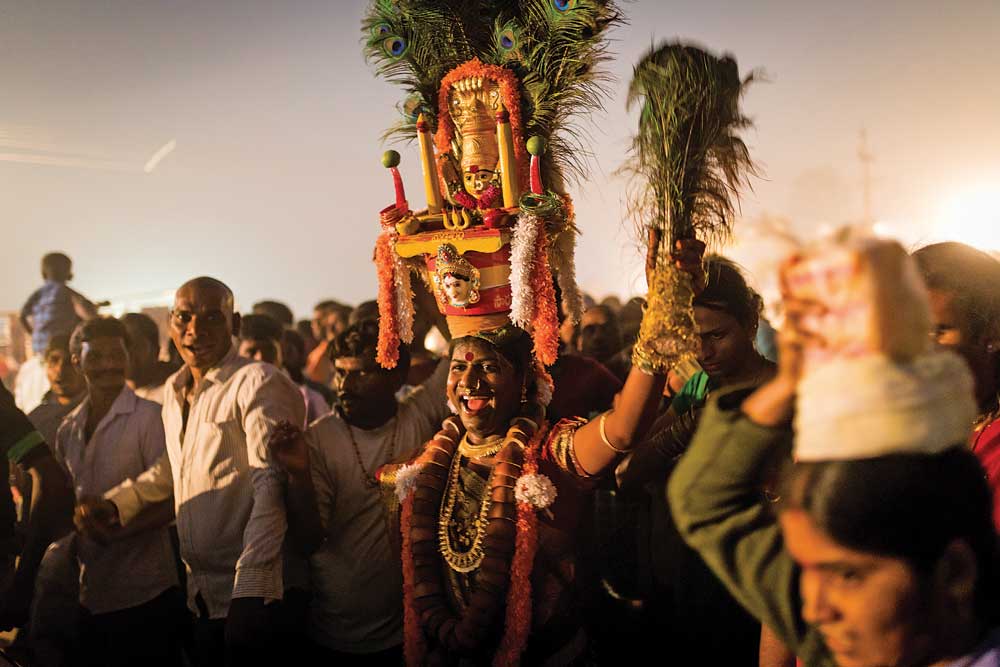 ARRIVING IN DUSTY, sun-scorched Medaram in Telangana at the end of a six- hour ride on a special state bus service from Hyderabad, you are acutely aware of entering a vast non-dimensional space. As you walk the raucous grounds hosting the Sammakka Saralamma Jatara, woodsmoke, dirt and warbled music swirling all around you, the broad strokes of the festival seem familiar enough: millions of devotees come to take a holy dip in the Jampanna Vagu, a muddy stream of the Godavari now equipped with showers, and to offer coconuts and mounds of jaggery at an open-air shrine to local tribal goddesses Sammakka and Saralamma. But there’s more to it. The peculiar sights of Medaram jump at you like grab-shots from a crossover universe in happy disarray—deities swaddled in turmeric, crested with peacock feathers and perched on the heads of men marching to drumbeats, cross-dressers heaving with passion, silver-haired women dancing wildly down the streets, children holding aloft birds to be slaughtered for dinner, youth stealing kisses in the tumble of a Ferris wheel, vendors disgorging whistles and cheap plastic wares like failed arks tossed out of the sea of urban consumerism. Faces, limbs, identities, conjoined in an anatomy of ritualised pageantry. Whatever urban furrow you crawled out of, you cannot be an onlooker here; you either run along, swept up in the mass motion, or you get out of the way. You leave your civility and your high-cultural laminations behind. Here, the grotesque is divine and divinity is an idea as fertile as the earth.

The story goes that nearly a thousand years ago, Pagididaraju, a Koya Tribal chief, his wife Sammakka, their daughter Saralamma and son Jampanna, rose up in revolt against the taxes imposed by the Kakatiya rulers on forest-dwelling communities, and died honourable deaths. To celebrate their rebellion, the village of Medaram, nestled in the Dandakaranya forests and two-and-a-half hours from Warangal since the road was asphalted in the 1970s, explodes in a festival touted as south Asia’s largest biennial gathering of Tribals. This year, it began on January 31st with devotees arriving by bullock cart, autorickshaw, bus, truck, car and foot to pitch bamboo pole tents under the full moon. At the entrance to the parking lot, policemen who are on traffic detail warm their hands against a feeble fire. “Night shift, day shift, doesn’t matter. The heat will get to you, and so will the cold. The crowds, they never stop,” says ASI M Ramulu, one of over 10,000 policemen deployed at the jatara. By the time the jatara wound up four days later, over 7.5 million people had visited Medaram, among them the tribes of Telangana, Andhra Pradesh, Maharashtra, Madhya Pradesh, Chhattisgarh and Jharkhand. The festival is symbolic of the culturally, if not historically, inflicted oppression on the tribes of central south India. The context may be somewhat lost in what has become a state-run event with tents and dinner buffets for visiting VIPs—among them the chief ministers of Telangana and Chhattisgarh, MPs, MLAs and minor actors—but in an India marching under the banner of religion, the jatara remains a rare refuge for communities who constantly invert accepted cultural, moral, social and sexual mores and confer sacredness upon their ancestors.

Women are the central characters in the rhizomatic impromptu processions. They dance and sway without breaking rhythm all the way to the shrine, the spectacle braiding strangers into one long Saturnalian rope that ends at the altar of belief

Come evening, the moodily-lit grounds, dotted with tents and a bounty of waste, pulse with immanent energy. Families huddle against the cold. The men head out to buy beer and whisky at one- and-a-half times the MRP. The lonely stumble into stalls distributing free condoms. Chiluveru Mallikamma, 36, a community worker, is stationed at one such facility set up by the Modern Architects for Rural India, where, over two days, 18,000 condoms have been given away along with protreptic pamphlets on AIDS. Boxes of condoms are stacked on a long table, and there is constant traffic. “There are eight such stalls. A lot of gay men and transgenders approach us, but women are no less brave,” Mallikamma says.

Women are also the central characters in the rhizomatic impromptu processions that seem to attach crowds until there is room for no more on the road. Dressed in full colour, and carrying an enormous block of jaggery—called bangaram—atop their heads all the way to the shrine, they dance and sway without breaking rhythm, the spectacle braiding strangers into one long Saturnalian rope that ends at the altar of faith. It is almost protest poetry.

“Sammakka comes in my dreams,” says Kadapoyana Kovaramma, 62, a Yadava who has come en famille from Kodakandla, 170 km away. The end of her sari is heavy with turmeric-stained rice, chunks of coconut, garlic pods and flowers. “We offer five fistfuls of rice to the goddess and upon returning home, butcher a goat and cook it with the remaining rice. This is an important ritual for us,” she says. Unlike mainstream Hindu gods, Sammakka and Sarakka don’t seem to demand very much: they have a thing for jaggery, but if you’d rather offer a quarter of McDowell’s or a chicken, or shave off your hair, or induce a ‘trance-state’, they sure wouldn’t mind.

Some men seem to think the goddesses like them to dress up in saris. The Sivasatis lead normal lives except when they come to the jatara, where they don a woman’s guise. The jatara is a sociocultural safety valve where a mosaic of identities thrives

Some men seem to think the goddesses like them to dress up in saris. The Sivasatis or the Sivashaktis lead normal lives except when they come to the jatara, where they don a woman’s guise and dance all night. Satyanarayana, or Sneha, as he now calls himself, a 24-year-old from Penugolanu in Krishna district, Andhra Pradesh, wears a white-and-red-sari, bangles and bindi. “I have been dressing up for Sammakka and other jataras since I was eight years of age,” he says, in the shadowy darkness between clusters of tents. A farmer, he says he is not “into” cross-dressing, but does it only as a tribute to the goddess. The jatara, clearly, is a sociocultural safety valve, a worry-free zone without coercive hierarchies where a mosaic of identities thrives.

The esoteric and the everyday spill onto the filthy streets of Medaram over the course of four magical days. Koya fortune tellers dressed in red cotton wraps brandish exotic herbs they claim to cast spells on to ward off disease and the evil eye. Tea shops, eateries, coconut and flower sellers do brisk business; more ambitious businessmen peddling clothes, bags and utensils bemoan the lull. Jaggery is pricey this year at Rs 80 a kg, and few pilgrims are willing to offer the equivalent of their body weight. The mirth and the mayhem are a constant source of worry for the authorities—women wearily making announcements for people who are lost; fire tenders battling dozens of crises; medics and ambulance drivers helpless when two people died in a stampede but saving hundreds of others. One couple in their twenties, Bongula Vignesh, a samosa seller, and his wife Kamala, having had a baby boy this morning at the marriage hall-turned-medical camp, has aptly named him Jampanna.

Despite the veneer of civilisation cast over the modern-day jatara—loudspeakers blaring songs composed for the event, live telecasts from the media tower, drone camera surveillance, even a VR experience stall—Sammakka’s primitive quiver of arrows is enough to pierce through it, always striking home.