Will Captain Kohli kiss the Cup? 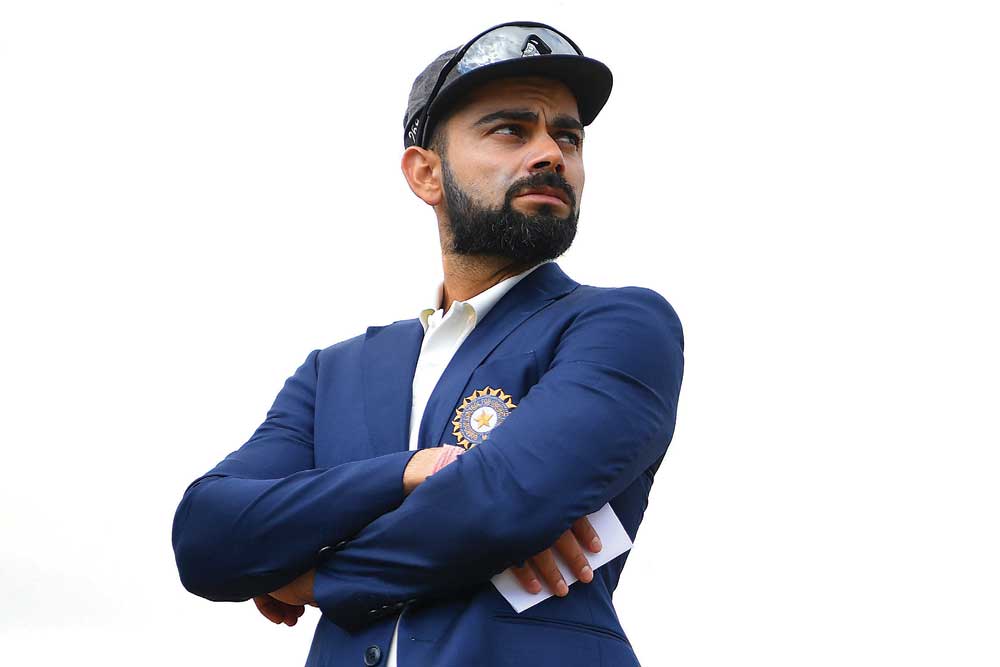 FOR A BRIEF MOMENT in his autobiography, Test Of My Life, Yuvraj Singh, the darling of the 2011 World Cup, pries open into what a successful World Cup campaign must feel like from the inside. Game after successful game, as the team heads deeper into the business end of the Cup, Singh talks of feeling confined for seven weeks within four unfamiliar walls, an endless moment lived between the dressing room, hotel room and the occasional private place or two where meetings with family and friends occur.

‘Other than the field, we wore our headphones everywhere we went and turned the volume up. From all corners there was just one thing people were saying, ‘How will India win? Will India win?’ There was the constant seesaw of the people’s hope, expectation and the weight of public dreams. The bearer who came to your room with a club sandwich… Before he said it, you heard it. ‘Sir? Tomorrow, sir. Win, sir,’’ Singh writes.

On the field, Singh was making the kind of impact most cricketers only dream of. He made 362 runs, took 15 wickets (the only time someone has made over 300 runs and taken 15 wickets at a single World Cup); single-handedly eliminated the Australians at the quarter-final; won four Man of the Match awards; and was eventually adjudged the Player of the Series. A familiar Yuvraj Singh moment from the tournament is he, at the India-Australia match, down on his knees on the ground, two arms punching the air, as something of a war cry emanates from his grilled visage. But with every performance, the pressure was becoming relentless. ‘We had to play the World Cup as if we had put bags over our heads. We did not want to be talked to, we did not want to be disturbed. But inside me, inside my head, the chatter would not stop. It was hard to keep an even keel.’

There was plenty going on in Singh’s life. Unknown to him then, he had a tumour in his lung. He struggled to keep his food down throughout the tournament. There was also a sense of responsibility he felt of being a senior member in the team, of being haunted by the 2003 World Cup, where having played so well, the occasion of the final ‘dwarfed’ them and they ‘blew it’. At home, the conversation had always been about his father, he writes, the all-rounder Yograj Singh, a contemporary of Kapil Dev (according to some, as good as or even better than India’s first World Cup-winning captain), who had fallen by the wayside after Dev won the 1983 World Cup. ‘I wanted to fit [my father] back in there somehow, to let people know that histories can be wrongly written, and sometimes we get a chance to rewrite the wrongs,’ Singh writes.

Singh was close to 30 at the World Cup, the age that is widely considered to be the prime of a batsman’s life. He was never the same once he returned after his treatment. According to recent reports, he is currently considering retirement from international cricket.

As the 2019 World Cup nears, there’s another Indian cricketer just about the same age with a reputation that far exceeds even that of Singh’s when he entered the 2011 World Cup. It’s the face on whom all the world’s cameras and eyes are trained. The question being asked isn’t just who will win this World Cup? Or even as simply, as in Singh’s case, will India win it? It is – will Virat Kohli win the World Cup?

Kohli enters the tournament as the world’s premier batsman. He isn’t just the format’s best batsman. He is the architect of how the modern game should be played. His records at what is possibly the the half-way mark of his career are already staggering: 10,843 runs with 41 centuries at an average close to 60. He raced past 10,000 runs last year in just 205 matches. (Sachin Tendulkar took 259.)

We may quibble at who is the greater batsman overall—Tendulkar or Kohli. But in the one-day international (ODI) format, it has long been settled. Kohli will overtake Tendulkar’s runs and centuries in another few years.

The 2019 tournament will no doubt be dominated by the bat. But the deciding factor, the last word will be the ball’s

And it isn’t just about his individual performances. Under him, Indian cricket is going through a renewed adolescence. None of the good boy days of the earlier periods, of the gentlemanly Dravids and the unexpressive Dhonis. Under Kohli, the players’ voices don’t drop, the faces have beards, the gait is haughtier, their approach more combative and the mantra (which Kohli repeats ad nauseam at every post-match chat) is ‘to express oneself’. There is a combative fearlessness.

It can’t be any other way. How else could he have scored those mountains of runs, to bat day in and day out, not with the kind of brilliance one saw with Tendulkar or Brian Lara in their prime, but with a kind of unnatural focus, cutting away all rash shots, the ball always on the ground, his face puckered in a concentrated grimace? How is it even possible without the certainty that he can be better than anyone else?

So what then does the World Cup mean for Kohli? We have to remember, he has already been part of a World Cup-winning team. Tendulkar spent an entire career chasing the Cup, only to lift it at the fag end of his career. Kohli was at the same tournament, just 22 years old, probably too young to even soak in the weight of that moment.

What has been missing in Kohli’s breathtaking CV, if you can call it that, are fireworks at the Cup. He has played two World Cups but failed to light them up. In both those tournaments, he was of course not what he is now. He would want to change that, he would want to take a big bite of the biggest tournament in this sport and leave an indelible mark on the Cup. He’s spent the last four years preparing (4,306 runs, 14 centuries at an average close to 80 in 69 matches), and putting together a team, and a coach, that can help him attain it.

There are however questions. Is the middle order still frail? Will MS Dhoni, the batsman, prove a liability at what must surely be his last World Cup or will he continue the rich form he has struck recently? These could very well decide, beside Kohli’s pyrotechnics, the fate of the team.

IN MANY WAYS, this is probably the most open World Cup in many years. There are only 10 teams, no associates. The last two teams who qualified for the tournament are West Indies and Afghanistan, far from being walkovers. One of them has the game’s biggest power- hitters and the other arguably the world’s best spin bowler. Each team plays the other. Very few will hazard a guess beyond who could make the semi-finals.

One of those should be Australia. Until a few months ago, the perennial World Cup favourites looked, well, un- Australian. They were bogged down by the sandpaper fiasco. They looked like they had lost a lot more than their two best batsmen. But with just a few months for the tournament to begin, the old order, of default Australian dominance, seems to have returned, along with the return of their two champion batsmen from exile.

Many other teams are just as good. Several of West Indies’ star players have returned to the fold. South Africa and New Zealand look as good as they have in the past.

And the old cricketing adage—that you look at what England is doing in ODI cricket and do the exact opposite—doesn’t hold true anymore. England’s is a squad teeming with all-rounders and powder- keg batsmen who play shots others never will, tonking balls into places others just can’t. At their recently concluded five- match ODI series against Pakistan (a guide if there is any on the likely conditions at the World Cup), which England won comprehensively, apart from the first washed- out match, the lowest score was 297. In every other match, both teams scored 350 or near about. In one match, Pakistan scored 358, their eighth highest ODI total. England reached there without breaking a sweat with more than five overs to spare. There have been nine ODIs in history in which more than 700 runs have been scored. Five of them have involved this England side since the last World Cup.

The 350 mark is in fact likely to be more than commonplace at the World Cup. The pitches are expected to be flat, the weather sunny, the boundaries small, with white balls that don’t age sufficiently to allow spin or reverse-swing. The England and Wales Cricket Board (ECB) is expecting over 500-run scores. They recently had scorecards (which go on sale at stands and contain a tally of runs which fans can tick off) reprinted in anticipation of 500-run totals. ‘Cricket is constantly evolving,’ the ECB chief executive Tom Harrison told The Telegraph a few days ago. ‘We had to reprint the whole thing because we think this is the tournament where the 500 run barrier will be breached for the first time.’

The tournament will no doubt be dominated by the bat. But the deciding factor, the last word will be the ball’s. Over the last few years, several teams, in expectation of such high totals, have been stocking up with not just restricting bowlers but wicket-takers. This is where India stands out—along with South Africa and Australia. India’s playing 11 will contain at least four wicket-taking bowlers (they could even, at the risk of team balance, go in with five), including two genuinely fast bowlers and two wrist-spinners.

There has been a concern over the recent months, especially during the Indian Premier League (IPL), that batsmen across the world have begun to read the two wrist-spinners Kuldeep Yadav and Yuzvendra Chahal better. Yadav in fact admitted in an interview that he rarely bowls at the Kolkata Knight Riders nets in the fear that visiting international batmen might figure him out.

The question of batsmen figuring out how to play them, coupled with average IPL performances, must begin to chafe at them. When Chahal was asked about it yet again recently, he replied, “If they start reading me, I’ll also read them better.”