Prithvi Shaw kicks off with a century at 18, invoking memories of another historic debut 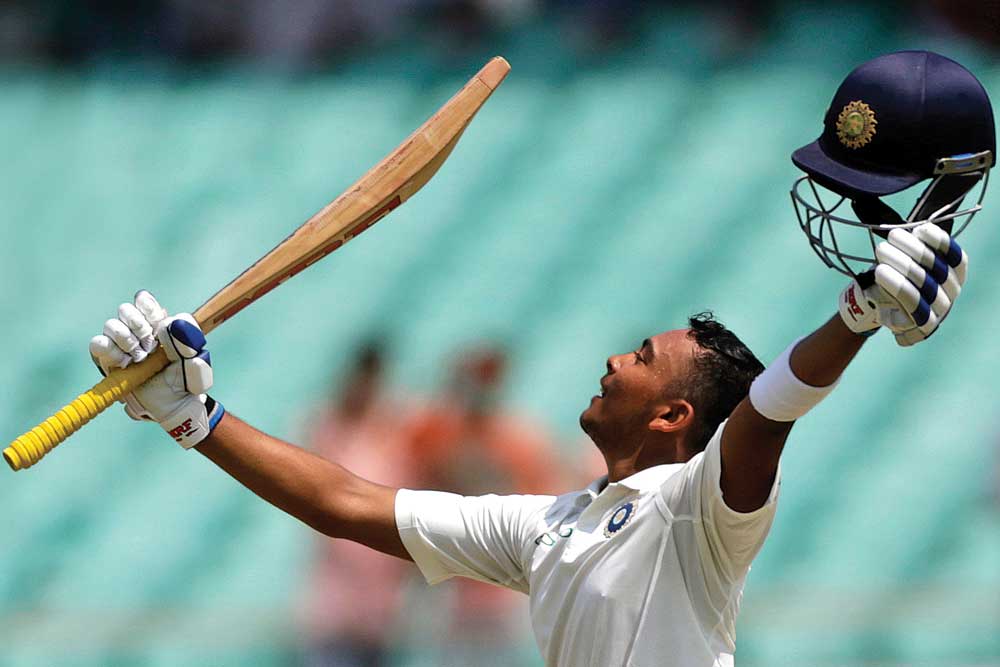 NOVEMBER 2013. Indian cricket was in mourning as its greatest superstar walked into the sunset. On the 16th day of that month, Sachin Tendulkar paid his regards to the Wankhede pitch and retired from the sport, even as grown-up men cried in the stands and elsewhere watching on television.

In a country whose first love is cricket, Tendulkar was the fuel to this fiery passion. Rolling back time to the day he bid adieu, it was difficult to surmise how it would feel when India played their next international game in the post-Tendulkar era. For some, it was the end of their association with cricket. For others, it became a routine sport that halted for no one.

Life goes on, and as if to drive home this very point, eight days after the Master Blaster ended his illustrious career, a 14-year-old broke world cricket’s timeline with a spanking 546 runs off 330 balls, a record-score then in school cricket.

One now better knows Prithvi Shaw as India’s youngest Test centurion (18 years, 329 days) on debut, when he scored 134 runs off 154 balls against West Indies in the first Test at Rajkot. He is also the second youngest Indian to score a Test hundred after Tendulkar, who had achieved this feat against England in 1990 at the age of 17 years, 107 days.

In Mumbai, mornings and evenings, in local trains and BEST buses, young boys can be seen lugging dirtied white kit bags to make it to practice in time. The competition is intense. From school to college, from Azad Maidan to local tournaments, from zonal to club cricket, and eventually to the vast wilderness of Indian domestic cricket through various age groups, maybe one or two kids out of 10,000 will make it to the international level. It demands sacrifice and patience, both from parents and the child.

Shaw is that one kid in 10,000. Having lost his mother at a very young age, he knew of hardships early in life. His father, Pankaj Shaw, is the key figure herein. An ardent cricket fan himself, he aspired to see his child as an accomplished cricketer. Pankaj gave up his business interests in Gujarat as he bid to completely oversee the combined cricketing ambition of father and son. He set up base in Virar, and if you were familiar with Mumbai, you would know the daily hardships of commuting from there to the big city. Add to it, a young son who needs his full attention.

He was a patient man, though, and invested in their dream. Prithvi’s cricketing education began at the age of three when he first held a bat. The Tendulkar parallels come in once again. Remember that age- old famous story of his elder brother Ajit Tendulkar spotting his early talent and channelling it towards cricket under the tutelage of Ramakant Achrekar? It is an almost similar tale.

Shaw didn’t feature in either of India’s last two tests in September, and it was an opportunity missed

“I have known Pankaj for nearly a decade now. He has left no stone unturned in the development of his child as a cricketer. They first came to me when he was in standard three. I still remember the day— Prithvi was not even dressed in whites, just normal clothes, but the swagger in his eyes was unmistakable. He wanted to be a cricketer, and a proper one at that,” says Raju Pathak, Prithvi’s coach in his formative years at Rizvi Springfield High School, Mumbai. “Prithvi is the youngest-ever kid I have taken under my wing. Of course, it needed some persuasion, and yet it was easy. At Rizvi, we have different nets catering to different age groups. On his trial day, I told Prithvi to pad up and bat in the youngest net for Under-12 kids. He said he wanted to bat in a higher age-group net. I said ‘No, you bat here first.’ Only two balls later, I moved him to the Under-16 net myself—he was that good. No, the word is natural. He is God-gifted.”

Tendulkar was a naturally active kid, and his brother’s endeavour was to give direction to that energy. It was similar in Prithvi’s case, except that the channelling came from an aware coach, and not a family member. Even so, it isn’t to say that Pankaj Shaw took a backseat once this cricketing journey began. As Pathak confirms, he was ever present, at net sessions and practice matches, every day, almost as if it was an unbreakable ritual.

THIS SACRIFICE EVENTUALLY paid reward. In 2006, the Shaws moved from Virar to Bandra so that the youngster’s schedule could be less taxing. Shiv Sena politician Sanjay Potnis played a key role—he took Prithvi under his wing, providing accommodation for father and son. It is one of those feel-good stories you never hear. And it doesn’t end here—four years later, former Mumbai cricketer Nilesh Kulkarni’s sports management company signed Prithvi for Rs 3 lakh per annum. At age 11, it could well have been the earliest instance of an ‘Indian cricketer’ signing up for management.

There is an underlying theme to this story. From Pathak, to Potnis, to Kulkarni, to other coaches at different stages of Mumbai cricket, and even with SG signing him up in 2014 for a Rs 36-lakh endorsement deal, Prithvi Shaw’s rise is a compelling tale of how he has been nurtured at every step by everyone he met. Perhaps this is an offshoot of Mumbai cricket’s great ethos— they know when they see something special and provide a grand stage for that talent to reach its eventual destiny.

In 2011, while the Men in Blue were busy triumphing in the ODI World Cup, a cricket documentary, Beyond All Boundaries, was being shot in Mumbai. It featured different aspects of cricketing life in the city, both from fans’ and players’ point of view. In focus was a well-known fan, Sudhir Gautam, Mumbai U-19 girls’ cricketer Akshaya Surve and young Prithvi, who was starting to make waves in the Mumbai school circuit.

Prithvi was in class six then, playing for MIG Club, another local club team at Air India Ground in Wakola, and captaining the Under-16 Rizvi school team. All of this at age 12, and there was no wonder that the documentary proclaimed him the next big thing in Indian cricket. In one segment of that documentary, he is seen batting against some bowlers elder to him. He misjudged a ball and gets hit on the helmet. Everyone is concerned for the little batsman, but Prithvi just takes a couple of steps at the crease to catch his breath without as much as touching his helmet. A few minutes later, he is ready to face the next ball.

Three years later, he scored that 500- plus score in a Harris Shield school tournament. He would go on to score hundreds on debut in Ranji and Duleep Trophy in the footsteps of Gundappa Vishwanath. In January 2018, under Indian cricket’s junior coach Rahul Dravid, he led his side to the Under-19 World Cup triumph in New Zealand.

A couple of weeks later, he was picked up by the Delhi Daredevils (in the players’ auction) for this year’s Indian Premier League season for Rs 1.2 crore wherein coach Ricky Ponting made him open mid-way through the season in place of out-of-form captain Gautam Gambhir.

Then came the call-up to the England Test squad in August, and eventually the maiden Test in Rajkot. The year 2018 isn’t done yet—a first trip to Australia might be in the offing too.

“No, I am not surprised at all,” says Raju Pathak. “From the first day when he asked to bat in the senior nets, Prithvi has shown this exemplary trait where he keeps on scoring runs. From one level to the next, he doesn’t stop scoring at all. I am sure many people would have thought that the 546- run knock was a flash in the pan, because it came in school cricket. Harris Shield is no ordinary tournament, though. It means something to do well in that tournament. I remember the day when he went out to bat—Prithvi was nervous. I just told him, ‘It is your opportunity to make some runs,’ and he told me he would grab it with both hands. He has always made opportunity count. From school to club cricket, in Mumbai’s domestic cricket, in Ranji and Duleep trophy, and now in Test cricket, there is nowhere he hasn’t scored runs.”

SHAW’S ENGLAND selection was a peculiar one. With the series in balance at 2-1, and two Tests to play, the selectors dropped Murali Vijay owing to poor form and Shaw was next in line having done well on the India tour earlier in the summer. Any cricket fan would probably have been surprised at that call-up, but what most people missed out was the fact that it wasn’t Shaw’s first trip to the UK.

In 2012, he was invited to England by Cheadle Hulme School in Manchester and scored 1,446 runs during a two-month stay, including a century on debut, of course. He also played for the local High Lane Cricket Club and for Cryptics Club side in Oxfordshire. His good run was rewarded with another invite for the 2013 summer when he played for Julian Wood Academy and Bradfield College (Berkshire). Again, in 2014, he played for Cleethorpes in the Yorkshire ECB County Premier League.

“His first call-up in 2012 was part of a charitable trust Cricket Beyond Boundaries that we had set up in 2011,” said John Wilson from Cheadle Hulme School in BBC’s The Doosra podcast. “That year India had lost 4-0 in the Test series in England and it was the last tour for the likes of Sachin Tendulkar, Rahul Dravid and VVS Laxman. It was the end of an era, and we thought this was an opportunity to help an Indian youngster to come and play in these conditions to help in his evolution. And Prithvi fitted in brilliantly. We are talking about a 12-year-old in alien conditions here. He was so humble and grateful for the experience. Cricket as a universal language allowed him to feel at home, and it is good to see that he hasn’t looked back since.”

Prithvi Shaw didn’t feature in either of India’s last two Tests in September, and it was an opportunity missed, given how Shikhar Dhawan has now been dropped from the longer format. It was an obvious call to hand Shaw his maiden Test cap at Rajkot, wherein after scoring his hundred, the 18-year-old said, “I was a little nervous, but then I decided to play it like any other game. I started playing at a very young age and have played a lot of cricket at different levels. So, I treated it as just another game.”

For those watching, it wasn’t as simple. Shaw smacked the West Indies’ bowling to all parts of the ground—19 boundaries in all. On air, as Shaw smacked one for four through backward point, former West Indies cricketer Ian Bishop said, “We have seen that shot before!” During his first 40 runs, Twitter was flooded with comparisons; only, those tweeting couldn’t decide whether he was Virender Sehwag or Sachin Tendulkar.

Chetan Narula
Chetan Narula is the author of Skipper: A Definitive Account of India’s Greatest Captains