A knock that is a celebration of the oldest and longest form of the game. And when it’s by Cheteshwar Pujara, it’s a spiritual experience 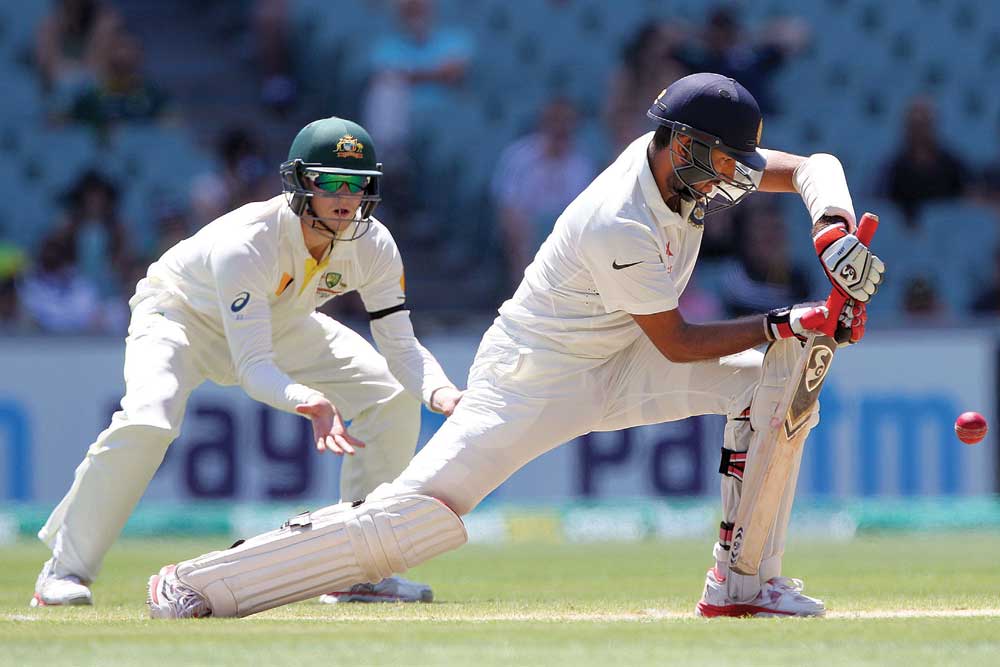 CHETESHWAR PUJARA blocked a ball. He thrust his spine ahead, pressed his bat against his front pad and dropped the spinning ball limp into the earth, causing a puff of dust to mushroom by his feet. The event hardly made a sound.

Cricket writers (and commentators) rely heavily on onomatopoeia, for occasions in the game are best understood if described with both audio and visual aids. A boundary is crunched to the ropes. A fast bowler rattles the timber. And when a batsman heaves a six, the men in the commentary box instantly go “bang!” But when a spinner’s ball is caressed to the ground with a dead bat on an abrasive and crumbling Subcontinental pitch, like the one Pujara was batting on in Ranchi, the sound, if any, is perhaps nothing more than a ‘pffft’. Heard at best by Australia’s close-in fielders. Pffft. Like the noise a Diwali bomb makes when it’s diffused.

To spectators in the stands and us watching on the telly, the sound of Pujara’s blocking bat was that of silence. Immaculate silence. It was the loudest, most ear-splitting silence that the opposition (the Australian team) and followers (believers of the purest form of the game) had heard in the new era.

At half-past-three on a bleak Sunday afternoon, one burdened by a mattress of grey clouds, Cheteshwar Pujara blocked another ball. It was the 496th delivery in his batting essay, making him the new record holder for the most number of balls faced by an Indian in a Test innings. Rahul Dravid had faced 495 balls against Pakistan in Rawalpindi in 2004, one of those knocks that had earned him the moniker of the ‘Wall’. Here, Pujara was stonewalling his way to becoming a one-man fortress—moat and all.

When the 29-year-old walked in to bat on the second day of the Ranchi Test, India was very much under the pump. KL Rahul, the team’s most consistent batsman in this series, had just been dismissed and India still trailed Australia’s first innings score by 360 runs. To put that deficit in perspective, one must understand that in the entire Test series, Virat Kohli’s side had crossed the threshold of 200 team runs just once in four attempts. At this point, when Pujara marked his crease an hour before stumps on Day Two, simply saving follow-on would’ve been considered an achievement.

By the time he was dismissed two whole days later, an hour before stumps on Day Four, Pujara alone had achieved a feat his entire team put together had struggled to do: score a double century. Despite negligible help from the specialist batsmen in India’s venerated middle order, he had turned the game on its head, in turn flipping a deficit of 360 runs (when he faced his first ball) to a lead of 152 runs. The marvel had taken 11 hours and 8 minutes to engineer, a time in which he faced 525 balls and defended or left 400 of them.

Four hundred dot balls. That’s 66.4 overs, or two-thirds of an entire ODI match, faced by one man without scoring a run. Ball after ball, over after over and hour after hour, he scanned the field, got into his stance, strained his vision to catch the bowler’s release point, focused on the ball’s point of contact with the pitch, trained his attention to his feet and bat, only to willingly then choose to suppress his primal instinct of finding gaps and scoring runs.

Pujara shouldered arms to balls outside his off-stump, dead batted the ones in line and padded away the leg side ones. It was a celebration of human endurance. And sufferance. But most of all, it was a celebration of the oldest and longest form of the game, which, if played with Pujara’s spirit, is a reflection of life itself: mostly bland, sometimes turbulent, at times worth treasuring. The guardians of the game, up in Ranchi’s commentary box, were mesmerised by what they were witnessing. Sanjay Manjrekar, quite prone to a watchful innings himself during his playing days, called the experience ‘meditative’. The great Australian opener Matthew Hayden summed it up best when he labelled Pujara a ‘batting tragic’.

On that bleak Sunday afternoon, Pujara blocked another ball. It was the 496th delivery in his batting essay, making him the new record holder for the most number of balls faced by an Indian in a Test innings

“Whenever I played a long innings, I found it very hard to not give in to the temptation of hitting a boundary now and then to change the rhythm,” Hayden said on air. “It’s near impossible to do what he’s doing, to make the zone he is in his home.” When Hayden temporarily broke the record for highest Test score with 380 runs against Zimbabwe in Perth in 2003, he consumed 262 dot balls, sprinkling his innings with 38 fours and 11 sixes. Pujara batted nearly a hundred balls more than Hayden’s longest knock, scored nearly two hundred runs less, and hit all of 21 fours. No sixes, of course, for that would be akin to committing murder in Pujara’s world. “This level of control,” Hayden added, “over his mind and body, for 11 hours, is simply out of this world.”

Twitter, too, took a shot at capturing 668 minutes in 140 characters. The opinions ranged from ‘@coolfunnytshirt Cheteshwar Pujara can become our next Defence Minister’ to ‘@KyaUkhaadLega Pujara acknowledges the appreciation of all the six people who are awake in the stadium.’ But only two voices would’ve mattered to Pujara. The most important one would’ve been that of Virat Kohli’s, his captain. In the post match press conference, Kohli was grateful—for both the player and his pièce de résistance.

“You know, sometimes I really feel bad for him. People don’t seem to understand what a valuable player he is for us,” Kohli said, looking visibly hurt. “He is the most composed player we have. When the pressure situation comes up, he is someone who will put his hand up and play long and hold up one end, which I think is a great quality in him. Someone like that is priceless.”

The only other voice that matters to Pujara is that of the man who taught him everything he knows about his craft—his father, Arvind Pujara’s. Sportspersons who referred to a parent as ‘coach’ during their formative years don’t often grow up with love and respect for either their forced career-path or their forced mentor. The Pujaras, hence, are an anomaly.

Cheteshwar’s faith in his father’s batting advice borders on devotion. So does Arvind’s conviction in his son’s game. Their unique bond was further galvanised when Reena, Cheteshwar’s mother, passed away twelve years ago. Sandeep Dwivedi, sports editor of The Indian Express and a man who knows the Pujaras well, once wrote: ‘Cheteshwar took solace in his cricket to deal with the loss, Arvind in Cheteshwar’s cricket.’

“Haan, chhokra ne achcha batting kiya (Yes, the boy batted well),” says Arvind, during our phone interview. As we speak, the senior Pujara is watching a rerun of Cheteshwar’s knock on his giant television monitor in Rajkot. A flashy TV isn’t an indulgence; it is Arvind’s only window to his son’s world.

Of the 47 Test matches Cheteshwar has played, Arvind has watched him live only once—when Test cricket came to Rajkot last November, where the son promptly scored a century. “I prefer to watch him on TV. All these close-up shots and replays help me see what he is doing right or wrong,” he says. “It becomes easy for both of us when we analyse his game every evening.”

So how does Arvind analyse the marathon innings? “Even as a child, he had the ability to focus and concentrate. As a 12- year old, he scored a triple century. But to focus like this in a Test match, for 11 hours, against a great opposition, in a pressure game, becomes tough,” he says. “So what I enjoyed watching was the way he switched on when the bowler was running in to bowl and switched off when the bowler was walking back to his mark. That way, mentally, 11 hours becomes five hours.”

For someone who has been widely acclaimed for being the chief architect of his son’s perfect Test technique and temperament (former India coach Duncan Fletcher once told Cheteshwar, “Please thank your father for doing my job”), Arvind is a remarkably modest soul. “I don’t have any coaching degrees. I have only played a handful of Ranji games. I see and understand the game from my heart. With that same heart, I taught him the nuts and bolts of batting. The rest, he did.” But can the virtues of building a long innings—patience, mental fortitude, appetite— be taught at the nuts-and-bolts level? “No. But it was taught to him. By his mother. Let me tell you a story…”

“Well before Cheteshwar began playing cricket, he was into video games. But his mother would only allow him to play if he would first close his eyes for five minutes and pray,” Arvind says. “I used to tell her, ‘Either let him play or don’t. What’s with this blackmailing?’ Then I realised what she had done. It was her way of teaching him to go into a calm space in his mind before doing something he likes. You can see it working even today.”

‘Calm space.’ When Pujara goes in there with a bat in hand, it can be a spiritual experience for some. To others, he is simply leaning forward and blocking a ball.