The law minister’s remarks have been interpreted as crossing a Lakshman rekha. They are hardly that 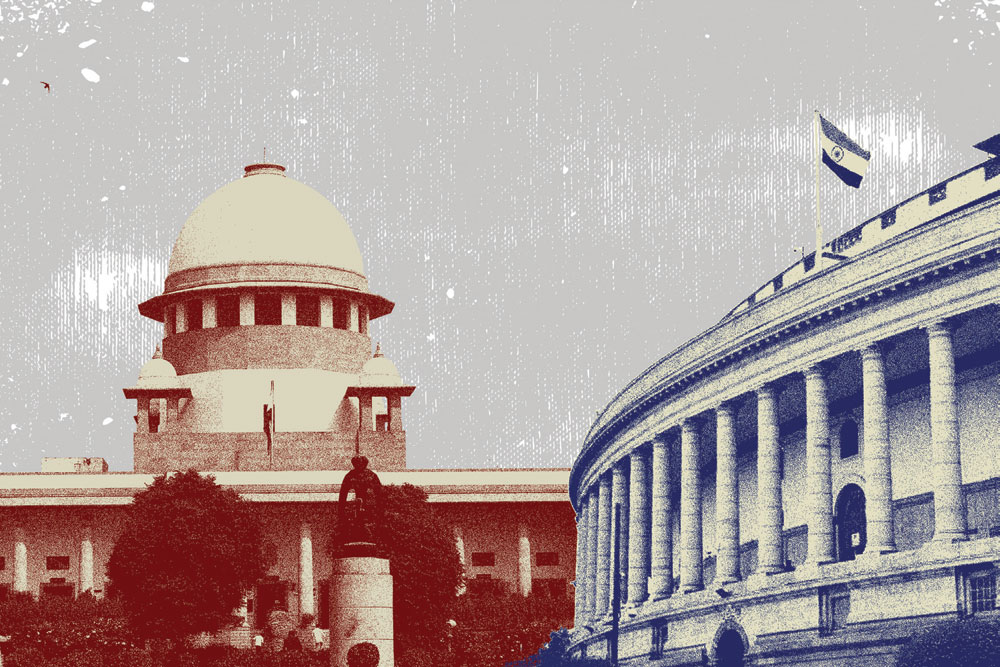 
FRICTION BETWEEN INDIA’S judiciary and its executive is not unusual. The government is the biggest litigant in the system and the higher judiciary routinely hears cases where the government is taken to task. But if there is one area where differences are pro­nounced to the point of being acerbic, it is the process of appointing judges. Matters came to a boil on November 25 when Kiren Rijiju, the Union minister for law and justice, questioned the collegium system invented by the Supreme Court to appoint judges. Within days, on November 28, a Supreme Court bench reacted—without naming the minister—by noting delays by the government in clearing recommendations for appointments.

If more fuel for the fire was needed, the government provided it by tossing back 19 of the 21 recommendations of the court for appointment to high courts. Of these, 10 names were returned for the second time, and nine after the first recommendation.

Rijiju had, in the course of a TV interview, described the collegium system as being “alien” to the Constitution. He had also questioned the much-diminished role of the government in the process.

It is a matter of debate whether the minister’s remarks were ‘intemperate’ or if the court was ‘anguished’ to say what it did. What is obvious is that there was plenty of dry fuel to light the fire between the court and the govern­ment. Only a spark was needed. But it is equally debatable as to who provided the spark: the court or the minister.

In the interview, the minister was asked why the government was “sitting” on files related to judicial appointments. While questioning the collegium system, he was careful and expressed his respect for the judiciary multiple times. His remarks about the collegium system being “alien” to the Constitution should be read along with the articles of the Constitution dealing with the appointment of judges.

Article 124(2) of the original—1950—Constitution says that judges of the Supreme Court shall be appointed by the presi­dent. It adds that “Provided that in the case of appointment of a Judge other than the Chief Justice, the Chief Justice of India [CJI] shall always be consulted.” A similar procedure—outlined in Article 217(1)—is prescribed for judges of high courts. Both articles provide for “consultation” with the CJI and, in the case of judges of high courts, with the governor of the concerned state and the chief justice of the high court.

Over time, however, the Supreme Court has effectively interpreted the word ‘consultation’ to be ‘concurrence’ of the CJI. The collegium came into being after the Second Judges Case that dates to 1993. In effect, it made the judiciary not just independent—which it always was—but autonomous as well, an unheard of practice in any democracy. It now appoints its own members and barring the rare case when Parliament opts for the impeachment of a judge under a very restrictive, special procedure, no judge can be removed.


The judiciary wants the executive to have no say in appointing judges. The danger today is from the carving out of a distinct judicial sphere. It is worth noting that for all the opprobrium around the present government and the global propaganda on democratic backsliding in India, it has not tinkered with the structural features that hold India’s democracy together

By their nature, different organs of the state have different accountability mechanisms. A legislator—MP or MLA—has to live with the fact that he or she may not be re-elected. Tenures of governments are also subject to legislative majorities and have to be renewed every five years. Originally, the procedure for judicial appointments reflected a careful design that balanced independence and accountability. The executive’s primacy in initiating and approving appointments kept a link with demo­cratic accountability even if it was indirect. But once the executive was divorced from appointments—it is now a mere permissions office—this link was broken.

While the Memorandum of Procedure (MoP) on appointments is elaborate and there should not be any friction, in practice, there is con­stant jostling between the judiciary and the government.

It is against this background that Rijiju’s remarks ought to be analysed.

The minister said, “[Y]ou tell me under which provision [of the Constitution] the collegium system has been prescribed.” He also said, “As long as the collegium system prevails, I have to respect it. But if you think the government should merely sign on the name to be appointed as a judge merely because it is recommended by the collegium, what is the role of the govern­ment then? What does due diligence mean?”

His most interesting remark in the interview was: “Never say that the government is sitting on the files. Then don’t send files to the government. You appoint yourself. You run the show then.”

Read together, these remarks show deep unease in the executive over the process of judicial appointments. They also hint at the manner in which the executive is likely to claw back some of its authority in the appointment process.

In the entire chain, from initiation, selection and to recom­mending the names for appointments, the judiciary controls virtually all stages except the last one: the actual appointment has to be made by the president on the advice of the prime min­ister. That last step cannot be taken over by the judiciary. And it is here that delays and reiteration of names provide space for the executive to have its say. When Rijiju made the remark about ‘why bother sending names to the government’, he was being strategic and knew that the final step was in the hands of the government. In the end, it becomes a game of who blinks first.

Should this happen in a properly run democracy? The ideal answer is no, but what has been practised in India for the past three-odd decades hardly permits an ideal solution. One way out was through the National Judicial Appointments Com­mission (NJAC) where the executive could have exercised a legitimate say in the appointment process. But such was the reaction from the legal fraternity at that time that even the mere presence of a representative from the executive was held as detrimental to judicial independence. In reality, NJAC was not even about turning the clock back to the original constitu­tional position but merely a partial reversion.

Since then, the executive has taken a ‘political’ route to assert its legitimate right in the matter. And it is legitimate: In no democracy do judges appoint judges without any say from the executive. By its nature, the process is bound to be bruising to inter-institutional amity. But is there another option on the table?

In the 1970s and 1980s, the danger was from an executive that would not listen to anyone. The judiciary was seen as an institutional safeguard and a brake against democratic backsliding in India. Now the pendulum has swung in the other direction. The judiciary wants the executive to have no say in appointing judges. The danger today is from the carving out of a distinct judicial sphere. It is worth noting that for all the opprobrium around the present government and the global propaganda on democratic backsliding in India, it has not tinkered with the structural features that hold India’s democracy together. The law minister’s remarks have been interpreted as crossing a Lakshman rekha. They are hardly that. Independent India’s history shows that democracy is well-established even if getting to a better political equilibrium is often an abrasive process. That should not deter the executive.