‘The only way to take an investment decision—super quick’ 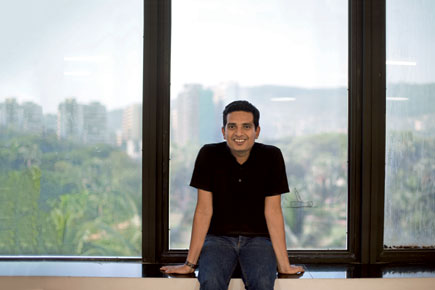 ‘The only way to take an investment decision—super quick’ In faded jeans, white shirt with sleeves rolled up and fawn- coloured suede shoes, Zishaan Hayath looks straight out of college. We are in the sprawling office of Toppr.com where everyone is dressed like him, casual-to-a-fault. Voices don’t dip, people don’t stand as he goes around and he melds anonymously into the steady stream of youngsters milling about. Hayath is 34 and something of an icon in the ecommerce space, both for the companies he has created and as an angel investor nurturing other startups. To take two—he made his initial fortune after selling his company to the Future Group and he has a stake in Ola Cabs, one of the biggest successes of Indian ecommerce. But his networth is the one thing that he won’t talk about. “It is all on paper. It can go away if those companies do not do well. So how do I become a millionaire?” he asks, and then throughout the one-hour conversation keeps emphasising it!

Originally from Hyderabad, Hayath moved to Mumbai in 2005 to study at IIT-Bombay. On graduating, he joined ITC Limited and then Opera Solutions. “My father passed away when I was young. My mother was a journalist with the Deccan Chronicle. She is also an Urdu poet. So the upbringing was sans a business environment. I veered towards business as I was curious,” says Hayath. In April 2008, he and a friend started Chaupaati Bazaar, one of the early companies in the Indian e-commerce space. Customers could call in and order a range of products from electronic items to magazines. The payment was by credit cards through an interactive voice response system. The products were sourced directly from brands and delivered through exclusive distributors. It was a success and he sold it to Future Group in September 2010. “I cannot say when I made my first million. It was not in cash, it was all on paper. I felt happy,” says Hayath. He also joined Futurebazaar as vice-president, product, but quit in January 2013 to float Toppr.com.

The idea of Toppr.com—an online preparation platform for entrance exams— came about when he realised that students were spending enormous amounts on coaching classes. After much research the idea of an education app was born. They have developed education programmes from class V upwards. Once the app is downloaded, it provides education material class-wise and Board-wise (SSC, CBSE, ICSE) for a yearly fee. “There was a dyslexic child who relied heavily on Toppr as it was digital. He did very well in studies and is now with an IIT. I am happy that Toppr. com has done well,” says Hayath.

His innings as a successful investor has its roots in IIT where he found a world of innovative ideas during interactions with seniors. It is here that he met Bhavish Aggarwal, the founder of Ola Cabs. Through discussions on the markets, trends and ideas, the two struck a friendship. He bought a stake in Ola in 2011 and though reluctant to talk about the returns, says that it has been his best investment so far. “I liked the business model of Ola. When it started out, the fledgling venture did not pick up soon but I was convinced that it had a future. I invested in Ola Cabs as I knew it would be a success. After slight hiccups it has picked up now,” says Hayath.

Hayath does not take too much time in making an investment decision. “Super quick. There is no other way,” he says. Of all his investments, Ola is closest to his heart because “this was my first investment”. Once an investment is made, Hayath is not hands-on and he does not worry about the company’s immediate performance. He trusts his instinct and so far it has not let him down. He keeps in touch with his portfolios through WhatsApp. Meanwhile, the hard work at Toppr.com is paying back—the company is now valued at $40 million today.

When he is looking to make an investment, his checkboxes are: Market, team and product. Real estate and education are sectors he keenly follows but at present food ordering and delivery apps interest him. He says these apps have given a new dimension to ordering food and has a bright future.
Hayath believes that India is a great market for investors, especially with the focus on Brand India. But even though the climate is good for startups, the government needs to the permission norms which are tedious. “When I wanted to set up Toppr.com, it took me such a long time to get the requisite permissions. Startups find it so difficult to get in money from foreign investors due to the lengthy government processes. The government should be a facilitator and not interfere in what the startups do. A free business environment is essential,” says Hayath.

He feels that founders of startups should not be spending all their time looking for funds amd that they should be concentrating on the business itself. It is also what drives him to invest in startups. “Capital should help create and build the company. Capital increases the pace of it. I felt that founders had to spend a lot of time raising capital and it was defeating the whole purpose of speed. Hence I started investing in startups if I liked the business model,” he says.

It began after juniors in IIT started seeking his advice for guidance on capital and investments. They came to him with ideas and wanted to know if they are workable and financially viable. He felt drawn to startups because he too had started that way. “They need advice on engineering, marketing, product, acquisitions and investments. I listen to them. Sometimes they just want me to listen to an idea. That is how my investments in startups started. I provide the first level investment,” says Hayath. Though exit options are available in several ventures, Hayath says he likes to stay invested as long as possible.
The amount of money he puts in can vary. The smallest cheque he has written out is Rs 2 lakh, but he refused to divulge his biggest investment. He terms this writing of cheques as his “Saturday activity”.

Hayath also mentored the Housing.com team in its initial years. Other firms he has invested in include Shopsense, Chaayos, SquadRun, AdPushup, Vacationlabs, Claro, Holachef, getSquareFeet, Qyk, NexGear, BiteClub and Orobind. Along with a group of IIT friends he has founded Powai Lake Ventures, a group of angel investors.

For a man who is so successful, Hayath does not own a car and he has no plans to buy one either because of Mumbai’s traffic. He goes to work from home on his Royal Enfield motorcycle. His only indulgence is shoes. “My lifestyle is like anyone else’s. I live in an apartment in Powai, ride to work or take an Ola. I eat out and travel. Beyond this, I barely have time for anything else. I travel economy class in flights and stay at budget hotels on my trips,” he says. He likes to travel because he gets to know the culture, lifestyle, business and history of other countries. But with Toppr taking 14 hours of his life daily, it is not something he gets to do often.