Why are Nanos Burning Up?

A few days ago, another Nano suddenly caught fire. Why is this happening to the world’s most famous small car? A) It’s a lousy car B) It has been sabotaged by Tata’s rivals C) Everybody is overreacting to a problem that is not uncommon to vehicles D) None of the above. 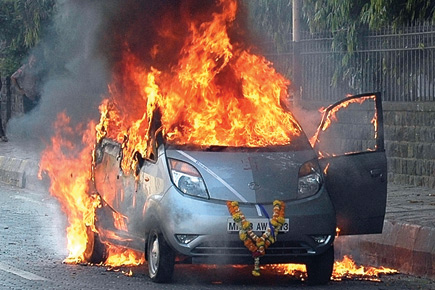 
Until the afternoon of 21 March when he took delivery of his Lunar Silver coloured Nano, 36-year-old Satish Sawant was your average citizen leading a normal life. He was well settled as a consultant with Cap Gemini. He had been mulling over buying a car for two years, but last Diwali he had finally decided. For long, he had been firmly fixed on the Maruti Alto. Then he met a friend who told him that he could get an out-of-turn Nano if he paid Rs 15,000 extra. Sawant did the maths. With a Nano, he would be getting a fully loaded air-conditioned car, larger than Alto, for about Rs 2.4 lakh. This would save Rs 75,000. It was a decision that would change Sawant’s life radically, if only for a while. He has now been in almost every major newspaper and on virtually every TV channel in India. He had a one-hour-and-forty-minute (he kept count) meeting with Ratan Tata, where he did most of the talking. He was even offered a bigger car, the Indica Xeta. Yet, he remains a deeply embittered man.

On the Sunday of 21 March, accompanying him to collect the car was his wife, five-year-old son and a temporary driver. Sawant got behind the wheel. The driver sat next to him, his wife and son settled in the rear seats. He started making his way home through mild afternoon traffic. Within a few minutes, the air-conditioner went off. And some time later, as if by magic, it came on again and then was off again. Then they somehow realised that water had started leaking from the boot of the car. They stopped, got out, checked and got back into the car. “It’s a new car, such things happen,” the driver told him. It was close to 3 pm that day and they were nearing his residence. His wife pointed out that something was burning. Sawant looked out. Nothing was burning. She insisted and forced him to park. He got out—there was smoke coming out of the car’s rear. He hurriedly got his wife and son out. The smoke turned billowing black. He took the car’s papers out. The little vehicle now began to burn like you see in the movies. A crowd had gathered and one of them gave him the sound advice that he should take photographs to ease the collection of insurance. He captured a set of images with his cellphone camera. They show flaming tongues at the bottom and sides of the car. From where the windscreen should be, an inferno rises to the skies.

Last Saturday, an almost exact image of another burning Nano in Delhi greeted newspaper readers. It was owned by a Supreme Court advocate. Unlike Sawant’s first ride, this one had already done 34,000 km. He had parked it and was waiting in the car for something when he noticed sparks at the back. He jumped out, and within minutes the car was ablaze. “Thankfully, I managed to leap out of the car in time. I shudder to think what might have happened otherwise, since it was all over so fast,” a newspaper report quoted him as saying.

So far, six Nanos have gone up in flames. About 50,000 of these cars have rolled out until now, and the new Sanand plant will soon be making 20,000 every month. In comparison, six sounds like a low number—but a car on fire forms a powerful image. The Nano’s reputation is shaken. Some more incidents, and the perception could possibly crumble.

No one really knows why the Nanos went up in flames. In public, Tata Motors almost appears nonchalant. Following the Sawant car incident in March and another flare-up in Baroda in April, the company appointed a committee which came back with a report in May. It said the car was ‘absolutely safe’ and none of the fires was related. There was the promise of a check up of all cars that had been put out. It looked as if some semblance of control had been imposed on the bad news. But now that the Delhi fire has happened, the matter is back to square one. Tata Motors attributed the first couple of cases to the melting of localised parts caused by faulty combination switches. That is somewhat similar to sparks and smoke in your house’s wiring caused by an electric short-circuit.

A company spokesperson contacted by Open says that it cannot be instantly verified if the Delhi glitch was similar to the one that caused two others earlier this year. “Nano was subjected to a thorough mechanical and design examination by an internal team in the presence of an independent external expert. The tests revealed that Nano is a robust, safe and state-of-the-art compact car,” says the spokesperson. “The issue was addressed comprehensively and immediately. We even changed the vendor who supplied the wiring kit. The remedial measures notwithstanding, we voluntarily decided to check each and every Nano sold so far. That process is still on,” he adds.

Says an expert in automotive systems at an IIT who wants to stay unnamed: “I’ve seen the footage of the Delhi fire. It certainly started in the boot, most likely in the engine compartment (that’s where Nano’s engine is). The engine was not on, yet there was a spark. It is possible that it (the spark) is coming from the fuel injection system. There could be other possibilities and it’s a matter of investigation.” He does not blame the Nano engineering. He pins it on poor quality control. “In the automotive industry, except for critical components, the manufacture of most parts is outsourced. You design certain things on a piece of paper, you test it in the lab, then the products are given to the vendors to manufacture, then there is quality control. I think it is something to do with a defective part, and the problem is with quality control. But I would not be alarmed. This is an out-of-the-box product and all products take time to stabilise. I would still call these (the burning Nanos) isolated incidents.”

The Nano has been almost eerily chased by bad news right from inception. The Singur plant in West Bengal where it was to be initially manufactured was allotted to Tata Motors by the state government, led by the Communist Party of India (CPM). The government went about coercing reluctant farmers to give up their land, and this led to a movement which is almost certain to topple the CPM’s long standing reign in the state. Before this, the land had been flooded in the rains, which delayed the project. After the Singur land agitation, Tata Motors pulled out and relocated to Gujarat, forcing further delays and the use of the Pantnagar plant for small assembly runs. And now that it is finally out on Indian streets, there are fires.

In October 2009, after fire incidents were reported in Delhi and Lucknow, this was the comment of a Tata spokesperson: “There has not been any case of fire in Nano cars. Apparently, smoke emanated from the cars due to a short circuit.” There are no blanket denials anymore, but for Tata Motors, the Nano is developing the reputation of being the only car that goes up in flames. But that is not true. It does happen to other cars as well.

Consider this experience of a man from Kerala as recounted in an online car forum, team-bhp.com: ‘…caught fire while parked and locked at our residence…To our utter shock and disbelief, the engine compartment was engulfed in fire for about 15 minutes before we somehow managed to put out the fire… Even though we have heard about cars catching fire, this was a total shock for us and not expected from a product manufactured by a trusted and well known company…’ The company in this case was Maruti Suzuki, and the vehicle, a Swift. Another news item put up in the forum talks about a Mercedes, no less, catching fire on the Mumbai-Pune Expressway. Says Rush Parekh, one of the moderators of Team BHP, “Many other cars—from Swifts to Mercs—have caught fire in the past.” But he accepts that Nano is an unusual case with six instances of fire reported within a year of the vehicle’s launch. He believes the car has some manufacturing defect. “Though they have not been very forthcoming about the reason behind these fires, they have been replacing fuel lines under warranty. Also, Tata could definitely have managed the PR better,” he says.

In the case of burning Nanos, an aside in the cast of characters is a man named Maruti. A 45-year-old cobbler from Mumbai, Maruti Bhandari became a poster boy for the kind of revolutionary market that this car would now cater to. Like Sawant, he was among the ordinary people whom the Nano briefly made famous. It was a little absurd too—he was called ‘lucky’ for buying a car with his own cash. But last December, Maruti decided to cancel his booking. Waiting till 2012 when his allotment would come was just not worth it. “Everyone just keeps asking me ‘Where is your car?’ and I’m sick and tired of answering that question. It’s quite embarrassing,” he told Open in an interview in April. At the same time, he also cited safety issues as a reason for the cancellation. Whether this is an afterthought on his part is a matter of conjecture. But if he represents the kind of market that the Nano has broken into, the car may have more image trouble than the company might think.

For Satish Sawant, meanwhile, the story took more twists after the fire. It had been a terrifying experience for his family. His five-year-old son flatly refused to step into another car immediately after the incident. Sawant was naturally an angry man. Tata Motors offered him another Nano or the option of an immediate full refund. Sawant says he was keen on knowing why this happened and was outraged when a Tata executive told him that the showroom had sold him a ‘demo car’. And then, to add fuel to fire, he was told during a meeting at the showroom, “Yahaan pe ek Xeta pada hai, inko de doh” (There is an Indica Xeta lying here, give it to him). “It was the tone in which it was said. I got angry. I told them that I want a Rs 15 lakh compensation and a Fiat Punto,” he says. The company refused. Sawant started shooting emails to Ratan Tata at whichever address he could find or imagine. One of them must have struck home, because Ratan Tata responded and in May Sawant met him for a little under two hours. “He was really nice. I told him that I am a common man and this chalta hai attitude of the Tatas will be damaging to the company. He said that it is not a manufacturing defect but they are still investigating.” After some time, Sawant got his refund cheque for the amount he had paid to buy his ill-fated Nano. He did not get the compensation he demanded. Now he has hired a lawyer and he plans to do the rounds of the courts. There was a time when all he wanted was to buy a car.