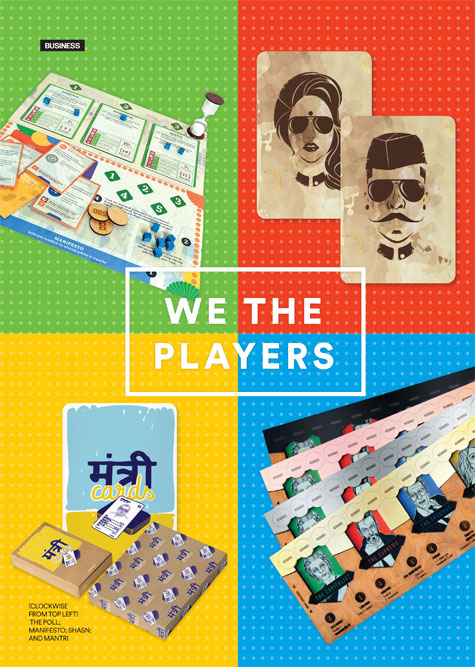 (Clockwise from top left) The Poll; Manifesto, Shasn; and Mantri


IN INDIA, the business of gaming is being peppered with politics. Literally. A clutch of entrepreneurs and developers are cashing in on the country’s unique political awareness and a board game movement around the world. They are creating political board games which have the scope of Catan (a famous board game), the addictiveness of WWE cards and the smarts of chess. To make an impact, gaming has to create a compelling user experience and developers are now understanding the needs of their target audience and creating interactive game play for users.

Recently, an Indian campaign on Kickstarter, a crowdfunding platform, surpassed its goal of $25,000 and reached $339,045 with the help of 4,000-plus backers. Shasn, ‘The Political Strategy Board Game’ which has created a buzz in India and abroad with its sharp and exciting game design, is only the latest entrant on the political gaming scene in India. Days prior to this, Mantri Cards, which calls itself ‘a friendly guide to your elected politicians’, superseded its target of Rs 4 lakh on the Indian crowdfunding platform Wishberry.
One might say it all began as early as 2017, when Delhi-based Vision India Foundation launched Manifesto, a card game that attempts to replicate the Indian democratic process through game play. “It was during a simple game of Monopoly that we began thinking. What if the electoral process in India was gamified?” aks Sahil Aggarwal, Director, Vision India Foundation, and one of the creators of the game. The card format was chosen over a board game simply to keep the costs low.

Each player in Manifesto represents a party and has to prove a majority in a region using ‘vote cards’ and ‘action cards’. The game is made more interesting using ‘scam cards’, ‘alliance cards’ and ‘media cards’ which help players amass more constituencies. The gameplay is simple, strategic and strives to inform the players of the intricacies of the Indian democratic process. The company will launch the game in regional languages soon.

The objective, Aggarwal explains, was to “make political discussions more productive and bring them to the dining table, thereby creating a sense of ease, so much so that the next step for the person would be to take an active part in politics.”

Constructive discourse seems to be the primary motivation for most of the creators of these political games, regardless of strategy and format. While The Poll: The Great Indian Election Game set out to address the vocabulary deficit in conversations about policy, Mantri Cards wants its players to have more reliable references, which will make their arguments more factual in nature.

Similarly, Zain Memon, the game developer at Memesys Labs who created Shasn, says that he became aware of the descent of political discussion into vitriol, even within families. Political conversation, according to him, had degraded to the level of name-calling and “nobody ever spoke of policy”. Fresh out of the experience of producing a film, An Insignificant Man, based on Arvind Kejriwal, which he claims worked as “passive research”, Memon began looking for the right medium.

An avid board gamer himself, he found Shasn a natural choice for its interactive format. “While I love the digital medium, it would still end up with people looking at their phones and minimising interaction,” he says. “Besides, the world over, board gaming as a medium has finally arrived, enough to take a more real-world turn. They have matured enough to no longer be an escape and can be used to talk about the world around us,” he says.

The first prototype of Shasn was produced in March 2018 and went through a series of iterations, with political researchers, journalists and designers as collaborators. Shasn is a complex strategy game that simulates the electoral process. Each player answers a question that will determine their political ideology and categorise them as one of the four stereotypes: Idealist, Showman, Supremo or Capitalist. The players have at their disposal funds, clout, media and trust that can be used to amass votes. Furthermore, you can capture areas, form majorities and even gerrymander voters (move and redraw boundaries). There are also conspiracy cards that you can use to scheme and sabotage other players. The game makes you confront both political and ethical questions and is designed without an inherent bias, which is to say, any of the four ideologues could win. It is currently available in four variants (different card decks): India 2020, USA 2020, Earth 2040 and Rome 40 BCE.

WHILE THE GAME may seem complex to a non-board gamer, Memon says it is quite straightforward for those used to adult games, the primary market they are tapping. Priced steeper than most board games at $80, Shasn, he is confident, is targeting a niche market.

Mantri Cards, on the other hand, uses the common trump cards format to give politics a twist. The founders set up a prototype app called ‘Besides’ that dispensed information and enabled political discussions ahead of the 2019 General Election. “We realised that a lot of people didn’t know that they were actually voting for their MP and not a political party. Besides, even the politically informed could name no more than 20 existing MPs of the current 542,” says Varun Mukerji, cofounder, Mantri Cards.

So they set out to create a game that would replace WWE wrestlers with Indian MPs in a bid to make publicly available data more palatable. The cards, in production now, will feature the name, age, education, assets and criminal cases of MPs and follow game play similar to the original. Further iterations will include Power Cards, which will give the game more complexity and intrigue.

The data for the cards has been sourced from the MPs’ self-declared affidavits on Myneta.info and the Election Commission’s website. They’ve also partnered with PRS Legislative Research, a non-profit research organisation, to equip the cards with a dynamic component. Scanning over a QR code on each of the cards leads you to PRS’ MP tracker. “In subsequent versions, we may look at performance and policy as markers,” says Mukerji.

TALKING ABOUT WHAT made them take the political game route, Mukerji says the Indian political process has always been interesting enough to lend itself to such formats. “The time is now ripe for these experiments, since people are more politically informed and take pride in being so,” he says. It does, he admits, have a lot to do with the democratisation of the gaming process itself. “Anybody can now create a game, the likes of Kickstarter are full of board game projects. The process is no longer restricted to a handful of industry leaders,” he says. Mukerji also attributes some of this success to the effective proliferation of strategy-based video and mobile games in the country.

Unlike Manifesto and Shasn, Mantri Cards, with its simple format and nostalgic value, has a wider audience and is suitable for children too. The familiarity of the concept and game play, Mukerji believes, can help players retain information easily.

A departure from the strategic approach, The Poll: The Great Indian Election Game, launched in January this year by journalist Abeer Kapoor, uses a more argumentative model. Having reported on elections from various corners of the country, Kapoor found that many people lacked a vocabulary for political discourse. His game uses real Indian electoral issues and brings the focus back on policy to ‘win’ an election.

Calling it ‘democracy in a box’, Kapoor explains the game: “You read the issues [mined from official and news sources], draft your manifesto, send in your workers to the constituency, argue and defend your stand and then finally campaign,” he says. “Ours is a serious game, one that puts a dense theme at its base and entrenches it in the minds of people through a repetitive process. Unlike chess and other board games, the decisions aren’t internal processes and thoughts, but driven by arguments and conversation. And our mandate is to take this ‘conversation’ through the board game to people who do not have access to such tools. See, democracy is crumbling the world over and we need to get in, dirty our hands and fix it,” he says.

He adds that long before the advent of table-top versions, gaming was being used as a method to cultivate ideas and behaviours. “For instance, the RSS has always used games effectively,” he says.

Supported by the Friedrich Naumann Foundation for Freedom, the game was developed by Kapoor with two researchers, who did several rounds of play testing. With The Poll being a semi-profit model, Kapoor is now focused on reaching rural areas and is developing more affordable and regional versions of the game (such as The Poll: Maharashtra and The Poll: Jharkhand). A digital version is also part of the plan.

With these four entrants, political games in India are coming of age, taking on serious, nuanced subjects and sparking meaningful conversations.

Aggarwal believes that with time, a consolidation of efforts is likely. That the demand exists is no longer debatable. “I don’t think there will be too many political games, maybe a few more. But more investments will come into the sector,” he says.

On similar lines, Kapoor explains that in India, board gaming is a nascent market and hasn’t reached its full potential. “Its growth depends on how we are able to reach people and the support we get. There is definitely a spurt and a large untapped market/user base—which is true for anything. Board games only account for 11 per cent of the gaming market right now and to push it into newer areas is contingent on us,” he says.

Besides market dynamics, political games are also receiving support from the growing Indian board gaming community, particularly from organised groups, such as ReRoll in Bengaluru and Bored Games in Mumbai.

Memon reiterates that it is the medium that is coming of age and games are starting to reflect public sentiment, just as in other media , like film and literature. “And first-movers like us will help build the grammar for it. It has been a long time coming and the last time [India] built a strategy game, it was chess,” he points out.