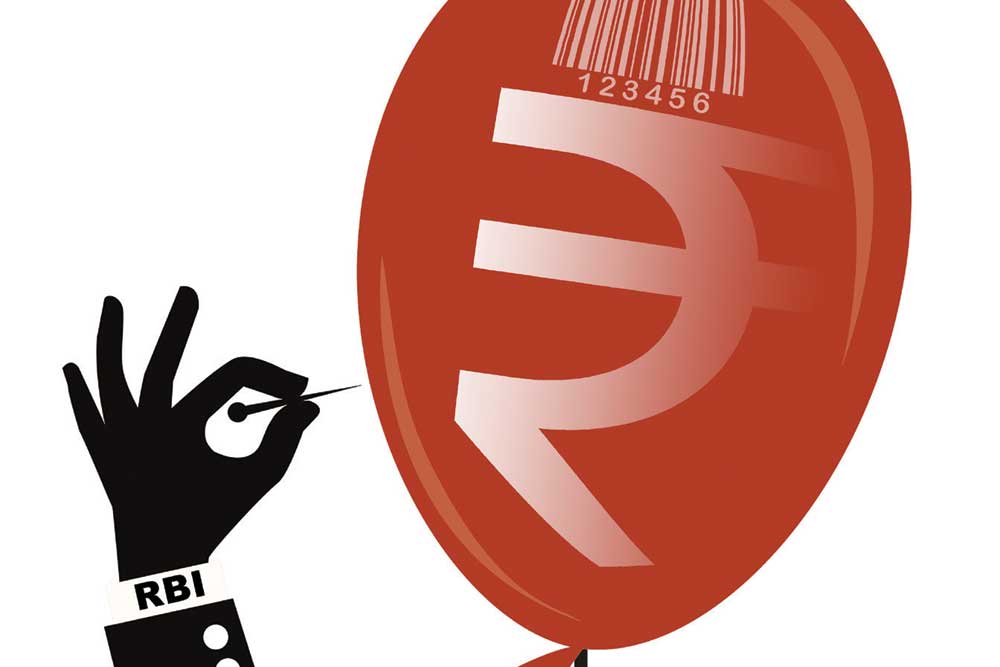 SOME TWO YEARS on, it’s not too premature to celebrate the recast of India’s monetary policy as an explicit inflation buster, is it? Its success seems clear. Ever since the Government amended the RBI Act in mid-2016 to designate ‘price stability’ as the ‘primary objective’ of nudging interest rates up or down, retail inflation has stayed within the target band of 2-6 per cent set for the central bank to achieve. The shift is largely a legacy of Raghuram Rajan, who as RBI Governor had worked with Urjit Patel at least a couple of years in advance to demonstrate the idea’s efficacy and win the approval of Finance Minister Arun Jaitley. Barring a dip below the lower limit last summer, inflation has stayed reasonably steady since. Apart from making space for the RBI to reduce its policy rate of interest from 8 per cent four years ago to its current level of 6 per cent, easing the cost of doing business, it has also lent the Indian rupee credibility as a currency that’ll retain its domestic value over long spans of time. What this does for investors who need to work out financial figures far into the future is invaluable. Reason enough, one would think, to declare the idea a triumph.

Its rationale is simple: since inflation in any economy is caused by too much money chasing too little stuff on sale, a quick addressal of the availability of funds—a hike or reduction of the policy rate to either tighten or loosen bank lending—in response to economic trends is basically what it takes to keep the scourge low (and stable). This approach is in line with the ‘monetarist’ school of thought advocated by University of Chicago, of which Rajan is a professor and whose guru-in-chief Milton Friedman had famously observed that inflation is ‘always and everywhere a monetary phenomenon’. In opposition are economists of a Keynesian persuasion who reject the idea for its alleged over-reliance on Free Market theory and utter ignorance of local factors. The differences of the two camps go right down to their elementary view of what an economy is (as nutshelled rather nicely in a rap titled Fight of the Century: Keynes vs Hayek on YouTube). In the context of India, meanwhile, critics of the RBI’s monetarist turn argue that Indian inflation is traceable chiefly to the costlier supply of essentials like oil and food; squeezing the cash available only tends to worsen people’s misery instead of relieving it. While the RBI may have met its official target, they say, it was enabled by a 2014 halving of global crude oil prices and a tight lid kept on what farmers get for their produce, that’s all. The basic idea, thus, is yet to face a real trial by fire. This it soon will, given the recent surge in oil prices, the Centre’s move to grant farmers a better deal, and the Budget’s let-go of fiscal restraint to spend on welfare schemes. If the RBI can’t contain the resultant price pushes, then the idea of inflation-targeting would be a failure.

Well, so far, that hasn’t happened. What we do know is that inflation fell to its lowest point about six months after Notebandi, which, if anything, endorses the view that it’s a function of all the cash sloshing around (with a time lag). What we don’t know is whether this relationship holds good on the way up.

Admittedly, those who’re waiting to laugh at the policy rejig of 2016 might not be entirely misled on the upward impact of fuel and food prices on the cost of living in India. Both these are aberrative sectors. Agriculture is stuck in a time warp of sorts, with supply and demand still too heavily mediated by the Government to make for a ‘market’ in any proper sense. Energy costs have been vulnerable to an oil cartel called OPEC since the 1970s, and American efforts to institute market pricing for hydrocarbons have begun to flounder again. Neither sector obeys the basic rules of classical economics on which Friedman made his grand assertion.

Reforms, though, could change that. Farms need to get a direct feel of consumer demand and also a larger share of the sum Indians spend on food. Likewise, the fuel sector could do with dynamism. As of now, it’s so overtaxed that the millions of barrels being guzzled stay rigid in their response to import cost fluctuations. Drawing petrol under the GST regime will not only slash its price instantly, but also give it that extra bit of elasticity needed to respond better to the RBI’s new approach. The eventual success of which, of course, would mark a new era for the Indian rupee.