Can Governor Raghuram Rajan crush retail inflation to 6 per cent in 22 months? 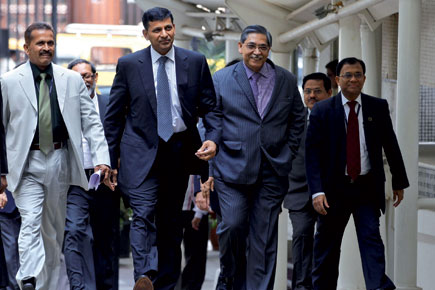 Can Governor Raghuram Rajan crush retail inflation to 6 per cent in 22 months?

Policy tweak statistics that one may trust have an autistic relationship with reality. Neither can soften the other. And there is no reason to suspect that the Central Statistics Office has fiddled its figures in saying that India’s economy has expanded at a rate of less than 5 per cent for a second successive year. Signs of a slump have been popping up all around. Nor should it surprise anyone that manufacturing may have shrunk as a sector for the first time since Liberalisation began. One could almost hear it grind down over the past few years. No less audible has been the mass misery of inflation running ahead of the economy’s pace of expansion. Extra earnings mean nothing if that extra money can’t even buy the same set of goods and services.

All in all, this stagflationary crisis has drawn high-level attention to suggestions made by the Urjit Patel Committee on how the RBI’s monetary policy could be better run. Of all the things that this panel would have our central bank do, what most Indians care most about is how it wants inflation nailed. This ought to be made the RBI’s goal, Patel says, with the bank going all out to hit a pre-set target.

Pardon those who roar in laughter at the idea of having retail prices play policy anchor. Some say it simply can’t be done, not in a land of dodgy data and a million myths. Some doubt that the RBI has much sway over prices anyway, let alone precision power. Others think it’s absurd to start apeing America. All this while, the RBI has been going after a tangle of targets in a lagbhag sort of way—with observers left guessing what it’s up to—even as it holds itself responsible for overall economic stability. Now, after the Great Recession, this wide-but-vague approach has begun to wow policy wonks in the West who want some of this ‘macroprudential regulation’ for their own economies.

Yet, Patel and gang do have a point. With ‘people power’ all the rage, the RBI can hardly afford the luxury of letting inflation slip out of control for the sake of other objectives. Moreover, a stable rate of low inflation is essential to the cause of economic expansion in the long term. And if India can manage to ‘glide’ towards a retail inflation target of under 6 per cent by January 2016, as the Patel Committee wants, it must surely be worth a try.

Can Governor Raghuram Rajan do it? Lower CPI inflation, at about 8.8 per cent now, by 2.8 percentage points in 22 months? Let’s watch.