A form of venture funding, which uses the profit motive to create social change, is slowly making its presence felt in India. 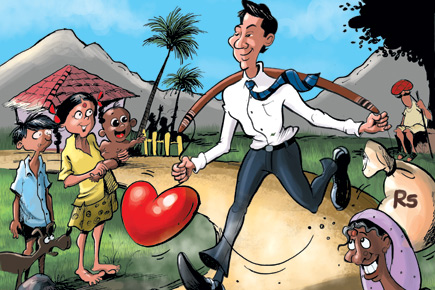 A form of venture funding, which uses the profit motive to create social change, is slowly making its presence felt in India.


Traditionally, human beings have been able to do little with the husk of rice but to throw it away. Once it fulfills its evolutionary role of protecting the rice, husk lies waste in piles in villages. But some men have now brightened the prospects of the husk.

In the mid-2000s, two Bihari IIT engineers decided that they had had enough of the US, and returned to their native state to start a company that was based on the idea that husk could be burnt to make electricity. “Husk Power Systems goes to villages that are not electrified and builds power plants running on rice husks which are available in plenty there. It is called a gassifier. One plant would be able to power three to four villages,” says Rama Siva, an HPS director. The first gassifier cost them Rs 20 lakh and the money came from the personal savings of the founders. Though their customers were villagers whom the founders solicited by going house to house, the business was soon profitable.

Ten years ago if a similar business were to expand, it would probably increase the number of power plants by a modest number and rest content because the kind of money needed to really scale up was just not available for an entrepreneur. “Capital is expensive, even now, unless you have a lot of connections. For someone who has no connections, it would be difficult to get off,” says Siva. Even at present, normal venture funds go to specific areas they are comfortable with, like biotechnology or infotech. Their knowledge does not extend to grassroot companies like HPS whose customers are illiterate and poor, a market venture funds don’t understand. And yet, HPS is building 150 power plants by the end of this year and 2,000 plants in four years. One of the reasons why it has been possible for it to do so is a new form of capital called social venture funding for enterprises which traditional funds would not touch.

There are a couple of unusual features to a social venture fund. The first is that while normal venture funds take a high risk (many companies fold up after taking the investors’ money), it also gets a high return when the gamble pays off. In social venture funding, the risk remains high but the return is usually low or medium (about six to eight per cent) because the companies cannot charge high profit margins from poor rural customers. The social venture fund’s return is therefore not calculated in just money, but a definite social impact.

Social venture funds exist because merely giving grants to address an issue fails to make use of one of capitalism’s greatest strength—the profit motive, which inspires a company to thrive. All the companies these funds invest in have to return their money with a premium. But the funds themselves can be of various types. They might be profit-oriented where they have to return money to their investors, or they might be philanthropic, where they get grants, but any return that they receive from their companies is again put back into funding other companies. What no social venture fund insists on is the pursuit of maximum profit.

One of the major social venture funding institution in India—which gave $ 375,000 this March to HPS—is Acumen. Says its director Varun Sahni, “The companies we invest in are profitable but they are not commercially profit maximising.” To illustrate the point, he talks about a joint venture between Acumen and Hindustan Latex— Lifespring, a brand of 20 to 30-bed maternity hospitals. A normal delivery in a private sector hospital costs around Rs 8,000 to 10,000. For Caesarean, it is about Rs 20,000-30,000. At a Lifespring hospital, such procedures cost one-sixth. Yet it is profitable. “We can start a hospital with $100,000. If you look at the large private hospitals, probably the cost of one bed there is $100,000. The theme behind this example is really a low operating cost structure that allows an affordable service which can then be scaled up. Which is a common theme in a lot of our investments,” says Sahni.

The other irony about social venture funding is that there is little agreement on what its definition is. Acumen likes to call itself ‘patient capital’. They raise money from philanthropists and invest or loan it to start-ups. “Because we don’t have to give the money back, we actually invest in far riskier businesses that are looking at market segments where commercial investors are not looking at today,” says Sahni.

Vineet Rai of Aavishkaar, a pioneer in this sector, refuses to be categorised along with Acumen because he does have to give money back to those who invest with him. “Acumen is a philanthropic fund. We are a hardcore venture capital fund which does social investing,” he says. “It took us five years to raise the first five crores because no intelligent person would invest in a high-risk, low return fund. People invest with me because all of them think they create an impact which is sustainable and long term. At the same time, they are hardcore investors and are actually looking for returns (more modest returns, though, compared to other forms of investment).”

There may not be a common definition for social venture funds, but there are similarities in the kind of companies these funds invest in. Aaviskaar’s 22 investments include low cost hospitals, stove burners, a manufacturer of cheap and low power consuming ATM machines (for banks who will set up ATMs in rural and semi-urban areas), microfinance providers, water purification plants, and handmade garments. Acumen has invested in a water purification company, Ayurveda hospitals for the poor, cheap LED lights, hydroelectric power for Himalayan villages. Elevar Equity, another such fund, has invested in microfinance companies and network connectivity for villages. There are also conventional venture fund companies which are entering this segment purely for returns, like VenturEast, which has invested in a company set up by a tailor that supplies uniforms to firms and another which makes telemedicine devices and software.

There are advantages beyond money in getting social venture funds. HPS’s Siva says, “It comes with enormous help in the running of the business. They help with things like legal issues and corporate structures.” Also, when a social venture fund provides funding, other investors follow. Rai says, The biggest advantage that Aavishkar brings is that when we put in money, a large number of investors start looking at and tracking that company.”

Once they disburse the money, the company is monitored closely. Sahni says, “The social impact is both from an output and outcome perspective. For example, we have investments in clean drinking water systems across India. So the output is clean drinking water at 10 paise per litre, but the outcome could be randomised studies over two-to-three years to see what is the reduction in diarrhoea in children below the age of three.” Aaviskaar sets targets of social impact and also on return of money over the long term. Says Rai, “We started off with 8 per cent return on investment [from invested companies], now we have taken it up to 15 per cent which is very high.”

A social venture fund usually attracts talented people who come at a huge discount. Megha Jindal was into investment banking when she got fed up with the single-minded pursuit of the bottomline. “I was interested in the development space and had been trying to track whether there was anything which combined both, because I didn’t really have the gumption to work in an NGO for Rs 10,000 a month. Aavishkar seemed like a good mix of the two worlds. So I decided to take the plunge. That time, I did take a salary cut and that was the price of doing something different. It’s definitely more fulfilling.”