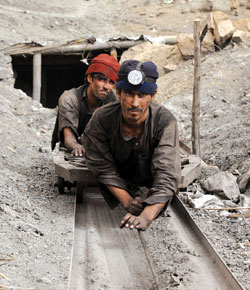 The odds on India achieving its disinvestment target for 2015-16 are lengthening by the day. And while this D-word still draws smiles of irony from Dalal Street watchers in London and New York—the term ‘privatisation’ being taboo in New Delhi for what it implies— the trouble this time round has nearly nothing to do with sarkari hands being wrung over the principle per se of selling off slices of what the state owns. If anything, the NDA Government has been quite keen to offload large chunks of ownership; neither ideology nor alliance dharma are in the way. But with Indian stock indices so shaky, corporate results cheerless and talk of a global recession in the air, it is equity investors who seem to be in hem-and- haw mode. As part of the Budget, the Government had put out a figure of Rs 69,500 crore in selloff proceeds as its aim for the fiscal year that ends on 31 March. So far, stake sales of the state-owned Indian Oil Corp, Power Finance Corp, Rural Electrification Corp and Dredging Corp have garnered a sum of a little over Rs 12,700 crore, and almost nobody expects that figure to go up by much in the two months left. ‘Volatile markets’ are to blame, says the Finance Ministry.

The NDA’s most impressive notch-up remains the mega-offer made a year ago of shares in Coal India Ltd. Hailed as the country’s biggest-ever issuance, it drew almost Rs 22,560 crore into the Centre’s coffers for another tenth of this state-run miner of coal (the first tenth having been offloaded by an IPO in 2010). Set up in the 1970s after collieries were nationalised, the company has held a monopoly over the sector ever since. Designated as a ‘maharatna’, it digs up half a billion tonnes of the black stuff every year—surpassing Rs 95,435 crore in sales last year—and sees no let-up in demand for decades to come.

So well hyped was the CIL disinvestment that it has left several investors with another D-word: dissonance. This is a fancy term for a twinge of post-purchase regret. Shares were sold at Rs 358 apiece and its market price even hit a high of Rs 447 last year, but it has been in decline since and is trading at only Rs 300 or so these days. The funny thing is that CIL’s profit prospects don’t look much better or worse than they did a year ago. Yes, its days of monopoly are now marked, with coal mines to be thrown open to private miners for commercial use (and not just captive). But CIL straddles the country’s best fields and it would be years before the impact of new players kicks in—sufficient time for it to adopt modern ways and turn competitive, giving the entire sector an efficiency boost. The Government expects the maharatna to remain India’s biggest miner well after private players get down and dirty. If CIL’s stock is weak, in other words, it’s largely because of the market’s overall mood.

The splash that CIL made, however, also presents the Centre with an opportunity to work on public perceptions. Last January’s offer had institutional buyers falling over one another for its shares while retail buyers sat watching in wonder. That’s a pity, for it’s aam investors at large who should’ve been more excited. While investment funds obsess over day-to-day price fluctuations, owning a slice of a company simply ought to be about sharing its success. What matters here is what it pays as a sliver of its profits. Last year, CIL paid Rs 20 and 70 paise per share. This translates to a truly rewarding ‘dividend yield’ (that figure as a percentage of its current price): at 6.8 per cent, no other Sensex stock beats it on this count. And since dividend income goes untaxed (thank goodness, given that its profits have already been taxed), this more or less matches what one would get on a fixed deposit. All considered, it’s a good stock for the money it spins. But only a few, alas, see it that way.

And that’s the nub of it. The broad task, really, is to convince retail investors that shares are something best bought for the cash they yield year after year, not as some sort of gambler’s chips to be encashed once prices rise. If the Government mounts a campaign for a perceptual shift on this, it would find it that much easier to offload shares in worthy PSUs regardless of yo-yo-ing stock indices. The objective would be to stir mass enthusiasm for stock ownership across the country, and perhaps a radical way to kick-start such an exercise would be to assign each citizen one share in a maharatna by way of an Aadhaar-enabled Direct Benefit Transfer . The very spectacle of it would do the job.