‘Start early. You will make mistakes and learn early’ 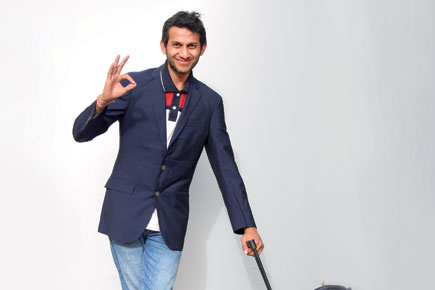 ‘Start early. You will make mistakes and learn early’ It was not before he landed at a car showroom to buy his very first car that Agarwal realised that he had come a long way from being the 17-year-old lanky college drop-out looking out to being on his own. “I had actually managed the typical American dream when I drove out in my car,” says the 21-year-old who spent the last two-and-half years building OYO Rooms, tagged as ‘India’s largest and fastest growing chain of branded budget hotels’, and literally living in them, out of a backpack. And it was no ordinary budget car that kids his age would often buy. Agarwal, who recently received a funding of Rs 630 crore from the SoftBank Group in Japan for his venture, headed straight-up for an Audi A4-smart, sophisticated and yet flashy enough for having made it big.

While he moved into a rented apartment-on the insistence of his family that was fed-up of his backpack existence-only three months back, the car, Agarwal says, was a necessary luxury for living up to expectations from India’s youngest millionaire from the booming start-up community. He may fit in well within the startup universe with his unkempt look of worn out jeans, slippers and a loose button-down shirt armed with his back-pack on his shoulder, but things were different when he stepped out in the real universe. “I realised that when I went to conferences to meet hoteliers and businessmen, there were certain expectations from me as the CEO of a company. They would take selflies with me and praise my work, but I felt that they missed something,” says Agarwal almost apologetically. The Audi just adds that zing of flashiness and an air of seriousness, to that jeans and back-pack look.

As he checks the various boxes for having achieved the American dream-a promising balance-sheet, a growing business that has extended its net over 130 cities and offers 20,000 rooms, an apartment, even if it is rented, and a brand new car- Agarwal is cautious enough to remind you of his basic and functional life, and the time when he had only Rs 35 in his bank account. “It is part of my middle class upbringing. One cannot be carried away. Even today my priority is to put together a great team and drive the company towards growth,” he says, listing out his daily schedule that is mainly spent in office as “spending time at home is a waste of time.” He does not remember the amount for his monthly pocket money, “maybe 5,000 bucks every month”, but the memory of Rs 35 left in his bank account barely two years ago does remind him of the ‘old’ days. “I had started this company with about Rs 16,000 which included my stipend from different projects on the side, my monthly allowance and some savings and today we run a company with over 2,000 employees,” he says. Running a start-up could also mean draining of funds and a frugal existence and Agarwal says that he remains grounded because he remembers the time when he didn’t have much to show in his bank account, was living on the stairs of his rented barsati as he did not pay his rent on time and also of the fact that he always wanted to do something of his own. Often known as India’s very own Mark Zuckerberg who encourages students to drop out of college during several talks and lectures, Agarwal says it is very important to remain grounded.

OYO stands for ‘On your Own’, and that’s essentially what he wanted to do all his life. Born in Bissam, Cuttack in Orissa’s Rayagada district, Agarwal developed a passion for software coding as a 13-year-old. He moved to Kota in Rajasthan to prepare for the entrance exams for IIT only to lose interest and instead took out a book that listed out the various engineering colleges that existed across the country. “In India, one generally does not have much of a say in many things—my parents usually decided what to wear, what to do and I couldn’t even have the remote to myself to watch cartoons on TV,” he says. Later, in the quest to do something on his own, he travelled to Delhi, managed to gather about Rs 16,000 and started a portal named Oravel, which was an Indian version of the popular US-based online rental website Airbnb. He claims to have spent around three months in several B &B (bed and breakfast) properties, to understand the nuances of the market. But he gave up on the idea soon as he figured that the problem was not about the availability of rooms and hotels. “The problem was standardisation and the predictability of keeping those standards and facilities,” he says.

At 19, Agarwal became the first Indian to become a Thiel Fellow, having won a well-known fellowship started by venture capitalist Peter Thiel for students across the globe under the age of 20 who have dropped out of college. The two-year-long fellowship provides those selected with $100,000, as well as guidance and other resources to establish a startup. According to Agarwal, Thiel is “the smartest person’ on the planet who encouraged me and the others ‘to think big and hire extremely smart people to work for you.”Agarwal used the money he received to improve upon the idea of Oravel, and set up OYO Rooms which was a virtual inventory of rooms that promised standardised facilities like free wi-fi, complimentary breakfast, cable TV, clean linen, air-conditioning and clean washrooms. He started out with one hotel in Gurgaon and would often double up as housekeeping staff and even cleaner, just to ensure that the standards were maintained. “These are basic facilities that are often expected but not provided, and OYO solves that problem,” he says. Not much of a traveler himself, even though OYO is about travel and hospitality, Agarwal thinks of himself as a problem solver. “That’s what attracted me to the business. I want to provide a solution to a problem within the hospitality industry,” he says.

Looking back, Agarwal says that he is living the Indian dream. “We are a young booming economy with over 50 per cent of the population being below the age of 25,” he explains. “I am still 21 and the youngest member of my company.”

And while any successful story has a flip side to it, Agarwal’s venture too is mired in its share of controversies. First, former OYO co-founder Manish Sinha, accused Agarwal of not being transparent over their dealings—pretty much like the Zuckerberg story. Later, Agarwal took ZO Rooms, a rival venture to court over allegations of data and software theft, often seen as a bid to squash ZO’s funding prospects. Earlier this year, during the launch of Oyo Rooms’ app at the India Habitat Centre in Delhi, ZO Rooms ambushed the event by planting several standees and posters both within and outside the premises, deriding the company’s app.

Agarwal however, chooses to ignore controversies. Right now, he is looking at recruiting the right kind of people for his company. While Agarwal himself is a college dropout, he has been hiring ‘kids’, older than him from the IITs, Harvard Business School and other premier institutes. “I basically want to hire ‘smart’ people,” he says. ‘Smart’ people according to Agarwal are people with high intellect and GPAs. “Since OYO is a tech company, the standards are very high. Sometimes I wonder if I would hire myself for this company and the answer is sadly a ‘No’,” he says. “Which is why I feel extremely lucky and proud to have founded this company.”

Valued at $400 million dollar and with Rs 800 crore of investments into the company, OYO Rooms is tipped to be the next unicorn in the startup world (‘unicorn’ is a term used for start-ups that has gained valuation of $1 billion dollar, a benchmark figure) after Flipkart, Ola and Snapdeal. Agarwal claims that he has no time for leisure. He does, however include a session of yoga in his daily schedule for a “healthy start to the day”, and also takes a day off every month to travel out of the city. “But it is very difficult to switch off at this stage,” he says. “Even if I do, I only visit the hills and end working,” he says. How? “I befriend the staff and start working in the hotel, researching and looking at how to include it in my inventory.”