Rise of the Middleweights

A new McKinsey & Co report finds that future growth for India will likely come from middleweight cities like Hyderabad and Surat, among 11 others. 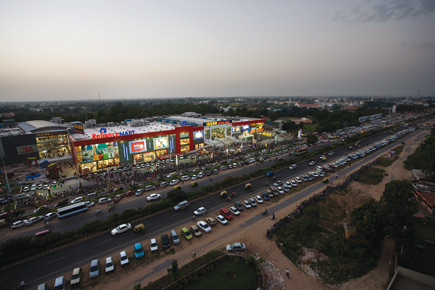 A new McKinsey report finds that future growth for India will likely come from middleweight cities like Hyderabad and Surat, among 11 others.


So far, India’s economic growth story has largely focused on the big four cities—Delhi, Mumbai, Bangalore and Kolkata—but a new McKinsey & Co report titled Urban World: Mapping the Economic Power of Cities finds that future growth will likely come from middleweight cities like Hyderabad and Surat, among 11 others.

The key point of the report is that of the 600 cities worldwide expected to drive GDP growth over the next decade-and-a-half, 577 will be so-called ‘middleweight’ cities, most of them in emerging markets. These cities are further subdivided by population into ‘large’ (5 to 10 million), ‘medium’ (2 to 5 million) and ‘small’ (150,000 to 2 million). The report says that such cities will contribute 37 per cent of the $54.9 trillion in cumulative GDP growth between 2007 and 2025.

India is expected to account for a large part of this growth. The report predicts that the country will have about five large middleweight cities: Bangalore, Ahmedabad, Surat, Pune and Hyderabad. “I fundamentally agree that [the growth will come from such cities],” says Dr Amit Kapoor of the Institute for Competitiveness, which releases a yearly report on Indian cities. “In a state like Maharashtra, 90 per cent [of its GDP] comes from [just] eight cities,”  Kapoor says.

In India, the report’s authors find, a large portion of this growth will also come through 14 urban clusters. In Maharashtra, for example, clusters will include Mumbai-Pune, which would include the state’s smaller cities.

The Gujarat cluster will include Ahmedabad, Surat, Vadodara and four smaller cities. Within these agglomera­tions, finding niches is going to be crucial. “The question is how cities are going to [specialise],” Kapoor continues.  “Ahmedabad is a car hub.”

Even Delhi’s National Capital Region, a thriving cluster at the moment, will need to evolve if it expects to sustain its rapid rate of development. The report predicts that Delhi will spawn two more clusters, perhaps one in Haryana and the other in Uttar Pradesh. This makes good sense to Kapoor. “We actually need to create alternative centres for excellence,” he says. “Existing cities can’t take the load. They are already under strain.”