Not quite Detroit yet, but Chennai is well placed to become a global hub of the automobile industry 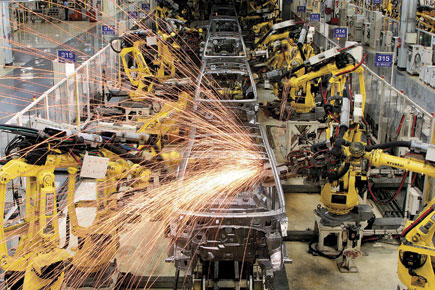 Not quite Detroit yet, but Chennai is well placed to become a global hub of the automobile industry


At the sprawling Hyundai factory in Sriperumbudur, about 40 km from Chennai, a revolution is taking shape. A large coil of steel is wheeled in by a smartly dressed foreman. Robots, some as tall as 15 ft, work in scary unison, welding and pressing the steel as sparks fly and tools buzz. It’s a surreal scene. The odd nudge of the human hand, screwing this bolt or fastening that end, is reassurance—proof that this is not part of some sci-fi dystopia of the future.

Bench pressed, cut and welded into shape, these steel formations are whirled to the body shop. Here, more robots get active. Precision robots. Their tolerance of error is just .01 mm. If they miss by just that much, the entire assembly line will screech to an abrupt halt. After all, the use of interchangeable parts—as such precision ensures—is the very basis of rapid rollout production.

One is barely done marvelling at this, that the shell of a car emerges. It’s headed for the paint shop, where semi-automatic machines spray colour with the aid of a few humans. All along the way, quality-control experts are checking everything busily—almost mimicking the robots—over a kilometre-long assembly line. The entire process, from coil to road-ready car, takes just four-and-a-half hours.

Hyundai Automobiles cranks out just over 600,000 units every year at its two plants in Sriperumbudur. It also operates an additional R&D facility in Hyderabad, and is planning a Rs 1,500 crore diesel engine facility that will give its vehicles another competitive edge.

And this company is not alone. At Nissan’s 600-acre plant in Oragadam, just 8 km from Sriperumbudur, an assembly line is busy bashing metal with as much accuracy. Off the line comes the Nissan Micra, a compact car for sale in India, apart from Europe, West Asia and Africa. “This is a complex logistical achievement for us,” says G Ranganathan, deputy manager of the body shop here. “A Micra has almost 5,000 different parts, and these come together here from over 170 suppliers. Nearly half the vendors are located in the Chennai area.”

CHENNAI AS AN AUTO HUB

The assembly line scene is replayed at several factories across a vast auto zone  around Chennai. Ford has a plant in nearby Maraimalai Nagar, another industrial suburb. Then there are heavy vehicle makers like Daimler, which is doubling capacity at its truck unit; and Caterpillar, with its heavy vehicles. The German car-maker BMW too has an assembly line for its luxury series. Markets for all these vehicles are booming.

The city has already seen auto sector investments worth $3 billion, which have translated into over 20,000 jobs. And these are well-paid jobs too; a new appointee with an Industrial Training Institute vocational degree working on Hyundai’s shopfloor earns Rs 35,000 per month plus benefits, about 20 per cent more than his counterpart at Maruti Suzuki’s Gurgaon factory in Haryana.

“Chennai has three principal advantages: quick clearance of projects, a remarkable work ethic—in my time, there were hardly any takers for even casual leave—and superb port connectivity,” says a former chairman of Hyundai.

Hyundai, for instance, took just three years to turn its 1996 MoU into a car factory. Likewise for Ford and Nissan; Tamil Nadu’s industry department was quick with land allotment and so on.

According to India’s Institute for Competitiveness, Chennai is the country’s second most competitive city, Delhi being the most. Chennai’s edge, says Amit Kapoor, the institute’s honorary chairman, lies in its “emergence as a manufacturing hub and especially an auto cluster that is primarily driven and fuelled by the engineering education revolution of the 1980s”. That revolution “made sure that Chennai had a talent pool that was educated and up-to-date on the latest technologies and innovations”. A former car company executive corroborates this. “When Honda announces a recall of its City sedan to replace a ‘lost motion spring’ in its i-Vtec engine that is ‘compressed by a rocker arm’,” he says, “Chennai is the sort of city where youngsters explain to parents what that could possibly mean.”

According to R Suresh, managing director of Stanton Chase, a Chennai-based search firm, apart from the city’s multitude of engineering colleges,“The work culture is a big plus and loyalty is very high,” he says. “You also witness a very low level of attrition here, partly because the firms themselves offer competitive packages. Finally, the commitment from the workforce is high.”

Industrial hubs anywhere in the world thrive not just on abundant human resources, but also vast local ancillary networks that crush costs by eking out ‘economies of scale’. Chennai has around 600 vendors that supply everything from brake-lining to headlights, and that number is fast rising. Gurgaon also has a large network of vendors forged first by Maruti Suzuki, but Chennai is poised to overleap it on hi-tech components. Unlike Suzuki, which kept key technology close to its chest for a long time, Hyundai and Nissan began in Chennai with an export market in mind, and have been quicker with their transfer of technology. In Chennai, for the first time, gear boxes and engines are also being made locally—with all the benefits of local vendors meeting state-of-the-art standards to chip in.

To make the most of the city’s chance of emerging as an auto technology centre, the Centre’s National Automotive Testing and R&D Infrastructure Project (NATRiP) is setting up Global Automotive Research Centre, a Rs 200 crore project, in Oragadam, The idea of this is to jumpstart indigenous R&D. The centre will have an advanced infotronics lab and engine research unit, apart from facilities for crash testing and the like.

Chennai’s all-round growth could well take it to pole position in serving the fast-growing Indian market for cars. India is expected to become the world’s fourth largest car market in three years, with the potential of achieving top status by 2020, according to a new report by Booz & Co, the New York-based consultancy. The report, Cars for India, Cars for the World, points out that $20 billion is likely to be invested in Indian automobile manufacturing over the next decade. “India’s real advantage is in the low cost of developing entire vehicle systems,” says Vishnu Mathur of the Society of Indian Automobile Manufacturers. “With new research facilities and a big domestic market, India is poised to have the hub advantage. However, we will need government support to pose a real challenge to countries like China and France, which are pouring billions into new product development… That will need to happen in order to take a leadership position in new technologies like battery-operated vehicles and smarter fuel engines.”

State incentives could help. Commerce Minister Anand Sharma said in January that Chennai can develop an all-Asian car soon, and his ministry will be supportive.
Given Chennai’s ascent, it’s tempting to compare it to Detroit, the centre of America’s car revolution more than half a century ago. But a better analogy might be Shenzhen, the Chinese city where an economic miracle began 30 years ago. The parking facility at the Hyundai plant best tells this story. Even with 25,000 newly minted cars, there is plenty of space for capacity expansion. And when coupled with the fact that Chennai is also emerging as a large electronics centre, with a Nokia plant employing 35,000 people, a Samsung facility and a port geared for exports, the Shenzhen analogy makes even more sense.

As we leave the Hyundai plant, the scope of Chennai’s transformation grows clearer. Cars are being loaded eight at a time onto elongated trucks. Depending on whether the steering wheel is on the right or left, it could be a dude in London or lady in Ludhiana hitting the tarmac with a set of wheels from Chennai.