‘Better not to be a rebel in today’s startup ecosystem’ 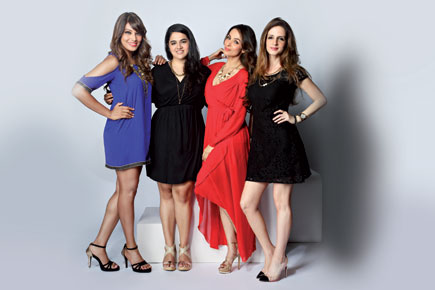 ‘Better not to be a rebel in today’s startup ecosystem’ Unlike most entrepreneurs, Preeta Sukhtankar wears the difficulties one experiences while establishing a startup lightly. She claims she finds little hardship in raising her two-year-old daughter while managing her venture, which has now turned three. And she is quick to disappoint anyone who seeks to link the paucity of women in India’s nascent startup ecosystem to any sort of gender bias. “Starting up isn’t as difficult as it is made out to be,” she says. “At most, it is hard. Period. Not harder [compared to men].”

But even Sukhtankar—who founded the unique e-commerce firm, The Label Life, earlier known as The Label Corp, where celebrities or “taste-makers” as she calls them, Malaika Arora Khan, Sussanne Khan and Bipasha Basu, style the collection— admits last year was particularly tough. After raising Rs 1 crore from an angel investor to start her venture in 2013, and US$ 1 million in another few months from the venture capitalist (VC) firm Kalaari Capital, Sukhtankar now needed more money. Her venture had grown organically during this period. There were no big discounts to acquire customers. No war chest she had access to with which she could take on the behemoths. But gradually, a loyal and discernible clientele had developed, even as the venture grew, from a four member team working out of a friend’s empty house (on the fourth floor of a building without a lift) to over 50 employees working out of a plush tastefully-done-up office in Bandra. Sukhtankar now needed money to stabilise her business, and to put her future plans into effect. But time was running out. And no deal was working out. “We [startups] are all cars aren’t we, waiting for some fuel?” she says. “All of us get a little petrol to take us a little ahead. Those that look promising get a little more petrol. Some get a full tank. But a lot just land up on the road, abandoned and without any fuel.”

Sukhtankar doesn’t say it, but it appears she was afraid that her vehicle would be abandoned too. During this period, what Sukhtankar believes was her worst day in life arrived. She was travelling in an auto rickshaw with her daughter, carrying an expensive designer bag that had been gifted to her recently by a friend, when she got the message that a retail firm that had agreed to invest US$ 2 million into her venture was now backing out, days ahead of the agreed upon time. When she reached home she realised that she had left her bag behind. And with it all her various bank cards, some cash, and several ID papers.

Her daughter, too young to understand what was going on, looked at her face and realised something was wrong. “She said,” Sukhtankar remembers, “‘Mommy don’t cry’.”

“No. No,” Sukhtankar says and laughs.

Although it hasn’t yet been formally announced, Sukhtankar is now raising US$ 5 million from a venture capitalist firm.

In a startup ecosystem of mostly young engineering graduates, Sukhtankar is different. She is a mother, 38 years old, studied humanities in college, not engineering or management from an IIT or IIM, and did various ‘non-techie’ jobs, from working as a fashion writer and stylist, and later as a publisher, with lifestyle magazines like Elle, L’Officiel and Seventeen, to working as a TV producer and later in the field of celebrity management.

According to Sukhtankar, her’s was the right age to establish a startup. The “kid in the hoodie”, she says, doesn’t have to be the gold standard for startup leadership. “So many youngsters who want to become entrepreneurs think it is cool to drop out of college these days, to quit jobs or think of themselves as some sort of rebels. But these aren’t essential traits,” she says. “I think my age was the perfect time to become an entrepreneur. You are more emotionally stable, have learnt to work with and accept different types of people and situations. What is important in today’s startup ecosystem is not to be a rebel and have a meltdown. But to be nice and courteous, which age teaches you.”

The idea behind The Label Life began to grow along with her working career. As she styled and wrote about fashion, produced events and content for TV, and got into celebrity management, she began to notice the change taking place in the women’s fashion segment in the country. What began to formalise in Sukhtankar’s mind was not another e-commerce firm—she claims she did not even realise it was an e-commerce venture —but something more personalised. An online venture that, according to her, married content with commerce. “If you look at e-commerce today, there are plenty of brands and all sorts of products. What is lacking is personalisation. My idea was to get creative directors or taste-makers, individuals who are famous but also well- respected for their style choices, to inspire consumers to make the right choice. If Malaika Arora Khan, for instance, were to recommend that I buy a particular white shirt, I would definitely choose that over what an internet algorithm recommends.”

Sukhtankar didn’t want celebs to endorse her label. She wanted individuals who would become stakeholders. She got Sussanne Khan, an interior designer and the former wife of the actor Hrithik Roshan, to style the home decor section, the actress Malaika Arora Khan to style the clothing section, and the actress Bipasha Basu to style the shoes and accessories section. Even as she worked out the idea behind the venture and the people who would collaborate with her, Sukhtankar began to feel her lack of experience in e-commerce and technology, and running a business firm. She spent much of the first year of the company’s existence on platforms like Quora, the popular question and answer website, learning management and technology terms. When she needed to raise money from VCs, she looked up Google to learn which companies perform this task in the country. “An investor would email me about things like conversion rate and term sheets. And I would be on Quora trying to understand what these things meant.”

The business however has grown steadily in the last three years. They now sell at least over 100 products each day from across the country. “We did not have retail experience,” she says. “But what we have is taste. And the good news is that taste can’t be bought.”

The abiding philosophy of Sukhtankar’s life, one that she applies to her business, is to not over-think things. If something has to be done, she says, you should just go ahead and do it. Last year, three days before Diwali, the period when commerce and retail firms, online or offline, do the most business, a crisis arose. The warehouse manager of her company struck work, taking along with him all the employees who worked under him. The manager had gotten into an altercation with another employee. So Sukhtankar, along with her driver, and two other people, travelled to Bhiwandi, a distant suburb in Mumbai where the warehouse is located, and began to pack the products themselves. When the rest of the employees saw Sukhtankar do the work herself, gradually, one by one, they all returned to help.

Sukhtankar claims that in the last three years she has founded the company, the material quality of her life hasn’t improved. “There has been no up-scaling,” she says, “only down-scaling.” In fact unlike when she worked previously for other firms, where she spent money without much thought, she has now begun to understand, in her words, the value of money.

But there are certain things that she does. Three years back, during the time she established The Label Life, she began underwater diving, and has since then gone on a diving expedition at least once every year. Last year, she spent three nights off the coast of Phuket on a boat, with other divers, doing little else than diving several times in a single day and night. She has also begun reading again, started enjoying listening to music, can now do a headstand in her yoga sessions, and spends a lot of time with her daughter.

“The first year of establishing a startup, you are usually delusional and don’t understand things too well. You spend the second year recovering from the punch you get in your stomach,” she says. “Then, I think, a stability and calmness comes. You have by now ticked all the boxes. You now know you are here to stay.”