Life at the top of India’s wealth pyramid 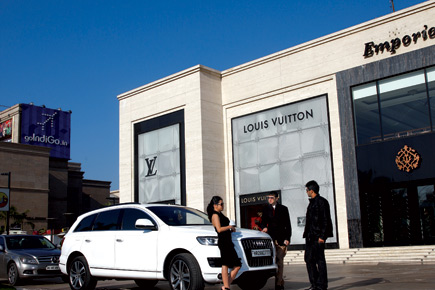 In 2011, the first edition of Top Of The Pyramid, a report put out by Kotak, had estimated that there were 62,000 ultra- HNHs in India with an aggregate net worth of Rs 45 lakh crore. Their numbers have grown consistently, and according to the 2014 edition, brought out by the bank in alliance with rating agency Crisil, India has an estimated 117,000 such households, with Rs 104 lakh crore to their names. Kotak Wealth projects that these numbers will grow further still, to 343,000 households with Rs 408 lakh crore by 2019.

But where are all these extra-loaded people coming from?

The report takes no names, but does make an attempt to identify the groups they belong to. It finds that three broad descriptors apply particularly well: entrepreneurs (those who wish to ‘attain a luxurious lifestyle’), inheritors (those who wish to ‘maintain’ such a lifestyle), and professionals (who want to ‘obtain’ their money’s worth, however it may be spent).

Whatever their background, the report unambiguously declares that spending is on the rise again, with ultra-HNHs splurging 44 per cent of their income, up from 30 per cent last year. This is reflected in the fact that the luxury market grew from an estimated Rs 36,000 crore in 2012 to Rs 51,000 crore in 2013. Kotak sees this pattern continuing; by its estimates, the market will cross Rs 84,000 crore over the next three years.

The ultra wealthy of India seem to be quite family-oriented as well, with the bulk of their purchases concentrated in jewellery, apparel, holidays, electronics and décor, all of which require consultation with families. The only other significant factor determining their purchases seems to be exclusivity. Whether it be Rs 48 lakh for a single day of golf, or nine cases of Rs 50,000-a-bottle whisky for an engagement, it seems that no price is too high for an ultra-HNI if the reward is early access to a snazzy new product—something of sheer snob value. Put it this way: if 125 cars, priced at Rs 1.57 crore apiece can be sold out in just 16 days, it is no wonder that the luxury market is booming.

Asked what it is they aspire to own, most ultra-HNIs spoke either of super-luxurious transport (cars, yachts, personal jets), or super-luxurious property, such as a villa in Amsterdam or a private island. This trend is notable even in their travelling patterns; while ‘taking a break’ is the most commonly cited reason for travel, a high percentage of holidays taken are also trips to global shopping destinations. Also, while the average duration of a trip taken has decreased, the frequency of trips has increased; the report mentions a businessman who sent his family to Wimbledon on a few days notice, spending perhaps Rs 50 lakh to do so.

While the 2014 Top Of The Pyramid report features a special section on philanthropy, it is notable right off the bat that despite the promising numbers—65 per cent of ultra-HNIs stating that ‘giving back to society’ is both important and necessary— only 6 per cent of their expenditure actually goes towards this purpose, just a percentage point ahead of their spending on alcohol and luxury watches. The Kotak report suggests that ‘most ultra HNIs are sceptical of [existing charities] as there is often a lack of clarity on the final utilisation of the contributions made.’ The bulk of the contributions that are made go through either trusts or NGOs (56 per cent); but on a happier note, the report notes that several ultra-HNHs are setting up their own foundations as well.

Finally, when it comes to adding to their already substantial wealth, it appears that ultra-HNIs prefer equity and real estate to other asset classes. Investment in real estate appears stable (29 per cent of an ultra-HNI portfolio on average), while investment in debt has fallen since last year to 24 per cent and equity risen to 38 per cent. Private equity has appeared as a significant new investment class too; the higher returns offered may be beginning to offset the distrust of complicated financial instruments. Of the three groups, entrepreneurs are most likely to take risky bets, while professionals are most risk-averse; but in any scenario, the report’s projections—that by 2019 there will be almost a third of a million ultra-HNHs in command of Rs 408 lakh crore—mean that there’s no escaping obscene wealth.