Kiran Mazumdar-Shaw: ‘There is no scientific debate in this country’

From the Biodiversity Bill to women in boardrooms, the irrepressible Kiran Mazumdar-Shaw strikes a different note 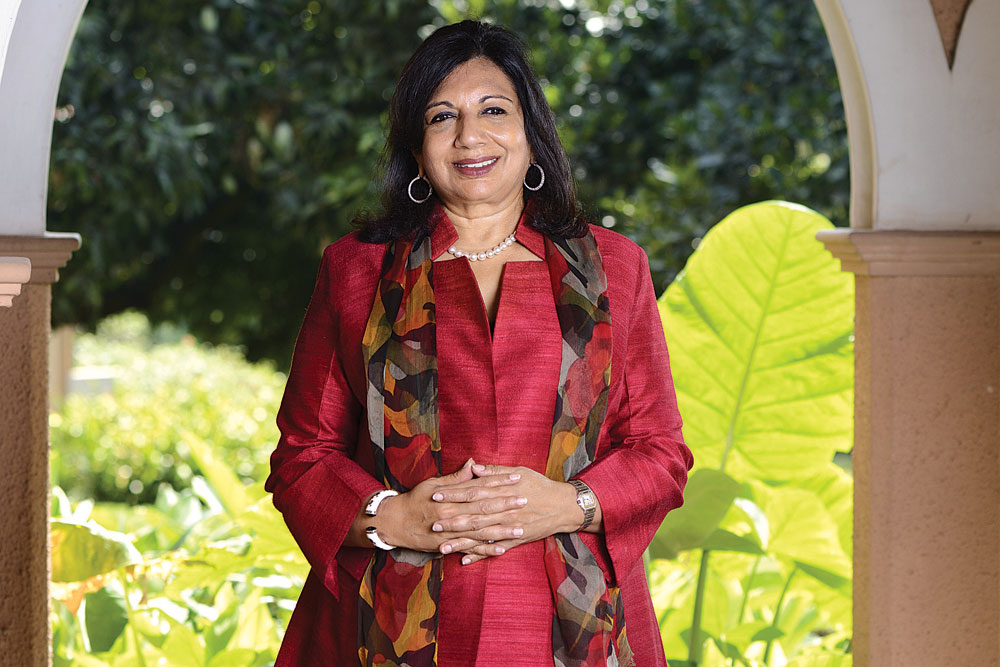 KIRAN MAZUMDAR-SHAW chooses candour over politeness, sides with facts, eschews hype and usually clinches the argument. It is little surprise then that the woman who helms Biocon—India’s largest research-driven biotech enterprise— was sporting enough to authorise a no-holds-barred biography by science journalist Seema Singh. Myth Breaker: Kiran Mazumdar-Shaw and the Story of Indian Biotech (Collins Business; 324 pages; Rs 599) uses an individual’s story to tell of an industry. In an interview over the phone, while awaiting her flight back to Bengaluru after the launch in Delhi, Mazumdar-Shaw is in blistering form. She pans the Biodiversity Bill, blames activists for thwarting innovation and says it is ludicrous how scientific people are dubbed anti-national. Excerpts:

In the prologue, a line reads ‘…this is the age of biology, just as the twentieth century was the age of physics.’ Can you explain that please?
Biological sciences have undergone a fantastic explosion of discoveries. And today, whether it is genomics or synthetic biology or a better understanding of life sciences, there is so much knowledge being created. Suddenly biology is being leveraged in ways that we had never imagined.

You have got the convergence of all the life sciences. What you are finding is that any scientific branch is incomplete without biology. Biology is a very integral part of computational science, biology is giving answers to a lot of unanswered questions.

In the late 70s you were running around Udyog Bhawan for government approvals. It is a fascinating window into that world.
I was 25 years old and was thrown into this licence raj. I had no idea how to deal with it. And you have all these touts. But (Nirmal) Biswas (head of the Directorate General of Trade Development), who was following my case, was a very wonderful person. It is actually touts who give you this perception that the Government is corrupt. And you can corrupt the Government if you choose to. I have come to learn over time that you cannot believe in this broad allegation. If you are honest, if you have a clear conscience, you don’t see corruption. You only hear about corruption. I know real estate is very corrupt. When I was trying to develop a small property, I said I’ll wait however long it takes but I will not pay speed money. The lower- down guys were so frustrated. They kept telling my guys, ‘What is wrong with madam’ and kept lowering the amount. I said, ‘No, tell them I am not going to give them one rupee.’ Finally they just gave in. In disgust almost. Like, ‘Here, take your bloody approval and get lost’. But we are all in a hurry to do things. That’s why an online transparent system is needed. The middlemen are responsible for corruption in most cases.

How can this ecosystem be made more entrepreneur friendly?
Life sciences, pharma, biotech—these are over-regulated fields. We need to get rid of a large number of extraneous regulations. I am working with regulators to figure out what are the must-haves, the nice-to- have and the need-not-have regulations. We need to get rid of the need-not-have. That will make business much healthier. Unnecessary regulations are built on mistrust. And therefore you have so many checks and balances that are not required. You have an SEZ which is already a cordoned- off zone. Now do you need to post custom officers throughout the facility, invigilating every movement of material or person? Can’t you do self-regulation and spot checks? The boys who deliver couriers to our SEZs have started throwing the parcels over the walls! ‘We don’t want to come into your premises, it takes so long to go through your customs etcetera,’ they say. Trust has to be built. Trust but verify. If someone is doing something wrong, then you invigilate everything.

So what should be done to the Bill?
It should be completely revamped. What is our objective? Our objective is to protect the biodiversity of India in a way that it does not get usurped and made the proprietary asset of another country. That is the main thing. But that does not mean that you tell people you cannot take one grain of Basmati rice out of the country without paying patent fees to India. That is crazy. The whole of agroprocessing is being affected. Today synthetic biology is a big opportunity for India, but if you start saying that if you synthetically copy the genetic make-up of an Indian variety you are in violation of the diversity act, that is crazy. Then technology will not progress. Let’s assume you want to make Basmati flavour and you crack the Basmati gene. No doubt it is a national biodiversity asset. But it is science. You have found which gene, which flavour. That is science. How can you say you are violating the Biodiversity law since you copied the Basmati rice? When it was being drawn up by UPA I, I voiced my reservations. Activists ignored us. They said, ‘You are anti-national’. This business of describing people who are practical and technology-driven and scientific as anti national—that is a bit crazy.

You have also spoken out against the stoppage of clinical trials.
The judiciary just halted clinical trials. And the data on which these activists brought this halt on clinical trials was also totally unsubstantiated. They just looked at meta analysis of clinical data and started alleging that people had started dying in clinical trials, which was not true. If you go into history of how NGOs have misused data to make a point, and how the judiciary has been convinced they are right, it is very sad. Regulators have not been given an opportunity to make a case for what they think is right or wrong.

Do you think scientific debate in India is at times taken over by activists?
Absolutely. All the time. Not sometimes. There is no scientific debate, rational debate in this country. It is all opinion led, anecdote led. It worries me. This clinical trial fiasco was based on anecdotal data, and the lay person believes it. Like in GM crops, you give anecdotal data that so many more cows died in this area compared to last year and you reason that BT cotton was grown here for the first time. It might not have anything to do with the crop at all. That is anecdotal data that gets used by activists.

There needs to be more investigative journalism, more serious data analysis, much more evidence-based decision making. And we need to get away from anecdotal decision making.

But to a lay reader like me, in this clinical trial scenario, it did seem the West was using Indians for trials.
I’ll tell you something, clinical trials are done anywhere in the world where you can recruit those patients. India has the highest incidence of cervical cancer, so the trials will happen here. You have to look at it objectively. Not how the media or activists are looking at it. Multiple sclerosis is a disease with very little incidence in India. Very little diagnosis in India. So when you do an MS trial, India is not a site for it. Most trials happen in Caucasian populations. So when we are doing these trials, are you going to say we are exploiting them? With clinical trials, you don’t know how patients are going to respond. Only 30-40 per cent respond really well. The rest don’t have a great response, but they don’t die either. So you can’t say, ‘Oh these patients didn’t respond, therefore you exploited them’. People need to understand the benefits of clinical trials.

You’ve always said being a woman leader is an advantage, it is about seeing it differently. Do you believe in affirmative action in the boardroom?
I am all for it. I believe a lot in gender diversity. And companies that do it without calling it so. But unfortunately not everyone sees it that way. So then you have to draw their attention and therefore it is a kind of affirmative action. Diversity is extremely important in all strata of the workplace; otherwise you wouldn’t develop a healthy work environment. When there are more women, it is more energising.

Would your counsel to women be ‘lean in’?
I would say build more confidence. Women tend to be too diffident. They tend to be reticent and downplay themselves, unlike men.

As the president of Bangalore Political Action Committee, how do you respond to the growing sentiment that the city will soon be unliveable?
There is hope. We are doing a lot to work towards the crumbling infrastructure. The government is aware of the serious challenges. I am very hopeful that it will improve and become liveable.