How the Rich Blow It

The luxury market is booming. But is it getting any more sophisticated?

The luxury market is booming. But is it getting any more sophisticated?


Outrageous wealth can inspire outrageous behaviour, especially if it’s someone else’s wealth. In confirmation of this, I am egged on to report I found myself on my knees four days before Valentine’s at the entrance of Delhi’s DLF Emporio Mall, ear to the ground. Such a posture in front of a Louis Vuitton store can be interpreted in extreme ways, but the Red Indian act seemed a good way to survey how the wealthy blow their money. Soon enough, they rumbled in.

They came beaming in their BMWs, some in Mercs, and at least one swished up the porch in a Rolls-Royce Phantom. They were headed for what looked like a museum full of encased exhibits, but they were here to actually buy this stuff. At prices that should never be revealed to Gags at Tags—that’s me—without an oxygen mask close at hand. 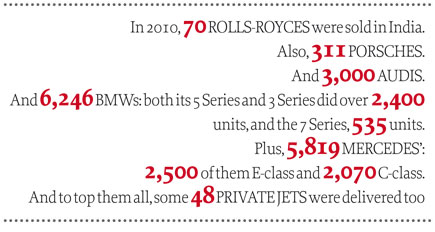 That a Rolls-Royce is a rare sight in India should have been warning enough. Last year, Indians bought 70 of the world’s 2,700 Rolls-Royces. All marques included, India sold 15,000 luxury cars. That’s one for every 25 regular sedans, of which 385,000 were sold. Many more would have hit Indian roads, had wait-lists not been so long. The pleasure of a Porsche does not come in an instant, they say, and so all 311 Indians who got one last year had to be what they’re not: patient. And Ferrari is not even here yet (it’s due next month). Meanwhile, Audi, BMW and Mercedes also found themselves straining to satisfy demand. Luxury leader BMW stole ahead, selling 6,246 cars. “Last year was phenomenal,” exults Dr Andreas Schaaf, president, BMW India. The marque’s German archrival Mercedes wasn’t far behind either, with 5,819 cars sold overall. And Audi delivered 3,000 cars last year.

All three boast of wait-lists right now that the Union Budget’s price booster shot will whittle down only a bit. “The rich find it empowering to be on luxury wait-lists,” says image consultant Dilip Cherian, “George W Bush has already pinpointed India’s middle-class as the reason for spiralling food prices around the world. Soon he might say that India’s wealthy are causing a luxury scarcity.”

It’s easy to ‘misunderestimate’ the agony caused by at least one major scarcity: airport infrastructure. India has more than 300 private jets. Since there just isn’t enough ground support, they are left to suffer the indignity of having to wrangle slots for landing and parking. Ankur Bhatia, executive director of Bird Group, is succinct: “We have a space crunch.”

Yet, some four dozen jets or so were delivered last year to Indian buyers. Expect even more this year. Gulfstream’s base model, the G150, is now available for Rs 69 crore, which is no big deal for an industrialist who sees airline schedules as a constraint best done away with.

Sanjay Kapoor, managing director, Genesis Luxury Fashion, estimates that luxury labels sold products worth at least Rs 20,000 crore last year in India.  It’s an evolving market, say luxury marketers. And the way luxury market consultant Radha Chadha talks about it, it does come across as a story of natural selection. According to her, India has long emerged from its early phase of ‘Subjugation’ and is now well into its ‘Start of Money’ phase. The market has been set on its way, and if all goes by plan, in a few years Wealthy India could find itself delivered safely to a ‘Way of life’ paradise where brand sophistication reigns.

It’s happening. Delhi’s Emporio Mall offers fair reason to suspect that beyond the obvious self-indulgence, the urbane Indian now sees brand patronage as a form of art patronage as well. In mass markets this ‘art’ is not so abstract, but, Gags at Tags is reliably informed that in the rarefied realm of luxury, brand appeal must always be subtle. Like art. This is that zone where “labels aren’t easily visible and prices start becoming mysterious”, in the words of Santosh Desai. Take a pair of Calvin Klein jeans. It sells at four times the price of Red Tab Levi’s. How come? Ah, it’s because of a secret slipped into its hip pocket that only label loyalists in the loop know of.