Confusion at the Pump 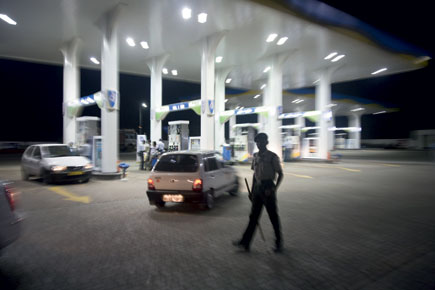 
Ever since Prime Minister Manmohan Singh spoke of his government’s readiness to “bite the bullet” on oil subsidies, it has been a question of when (not if) Indian fuel prices will be raised. “It has to be soon,” says Dharma Kirti Joshi, chief economist, Crisil. Otherwise, the selling of diesel, kerosene and cooking gas (prices of which remain regulated) cheaper than their cost could leave the Centre and its oil companies, who bear the burden half-and-half, poorer by Rs 2 lakh crore in 2012-13. Last year, these ‘under-recoveries’ added up to Rs 1.4 lakh crore.

Petrol prices were supposedly deregulated in mid-2010, but what it has effectively meant is that the Government does not bear its share of the burden on its under-recoveries. Global crude oil prices have risen by about 47 per cent since 2010-11, but petrol in India still sells at only 25 per cent more (among regulated fuels, kerosene is up 16.5 and diesel just 8 per cent). This is because State-run oil companies need the Centre’s okay before raising retail prices. This has been such an irritant that they asked the Government last week to re-regulate petrol; this way, they would at least get the Centre to pick up half the tab for its populism. The Government, of course, was quick to reject their proposal. “Petrol continues to be deregulated,” declared Jaipal Reddy.

Underpricing fuel makes Indian oil companies “globally uncompetitive”, says Lydia Powell, an energy expert with the Observer Research Foundation. According to her, the Government has failed to educate the Indian fuel consumer, who needs to know that oil prices are set by a global market over which an importer like India has no control, and that a weakening rupee puts oil even further out of reach, and so it is time that s/he is exposed to this reality. Other experts also hope that higher prices would curtail India’s fuel consumption. Global oil subsidies, estimated at an annual $192 billion (of which Opec members account for $121 billion), are seen as a socialist relic and blamed for acting as an artificial buoy for demand, thus raising costs even for market economies that do not believe in governments paying people’s energy bills.

India’s hybrid socialist/market system has caused confusion in other energy-related sectors as well (not to mention telecom). In the electoral arena, costly energy loses votes. But perhaps Goa has taken a pragmatic path. To relieve consumers, it has abolished sales tax on petrol. Might other states follow?