Internet sales are expanding rapidly in India. Should foreign players be allowed entry? 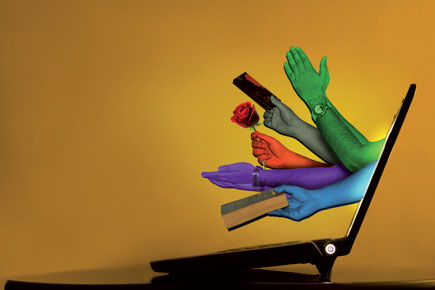 Internet sales are expanding rapidly in India. Should foreign players be allowed entry?

After reluctantly opening up India’s multi-brand retail sector to foreign players last year, the Government has floated a ‘discussion paper’ to seek others’ views on allowing FDI in Business-to-Consumer (B2C) e-commerce, the space in which internet retailers like Amazon operate. “It was long overdue,” says Harminder Sahni, managing director of Wazir Advisors. But one big fear, he adds, is that the Government may impose conditions—such as local sourcing norms—that foreign online retailers may find unreasonable. These could dilute their core strength: the global sourcing of products at competitive prices. “Such conditions imposed on e-commerce should not… scare global players away,” cautions Pranay Chulet, CEO of Quikr.com.

Online retail in India has seen a spurt of sales in recent years. As a sector, e-commerce overall is estimated at $13 billion in annual revenues and has been expanding at a clip of about 35 per cent every year. The B2C segment is dominated by travel facilitators such as Makemytrip.com, Yatra.com and IRCTC, which together reportedly represent over two-thirds of all consumer transactions online, with Flipkart, SnapDeal and others making up the rest.

Usually, e-retailers use a model that combines high sales volumes with low transaction and inventory costs to offer price discounts. If global players set up India-specific online stores with domestic delivery networks, then their global scale of operations may give them a structural advantage over local players. They may also wield more bargaining power. If local retailers are forced out of business by this, then it may result in job losses in India, a risk acknowledged by the Centre’s discussion paper. Chulet of Quikr, however, calls this a “myopic view” and says that “while occupational profiles may change”, organised retail—both online and offline—would “actually create more jobs in the economy”. Sahni predicts that letting global e-retailers into India will see local players selling either whole or partial ownership stakes to them. Indian websites that are already ahead of the curve may seek to retain their independence, confident that it is not easy for latecomers to play catch-up on the internet because of the so-called ‘network effects’ advantage of a market leader.

The big picture constraint on B2C e-commerce is India’s low internet penetration. As the discussion paper notes, this places a limit on its near-term domestic potential. Nonetheless, expect this policy proposal to attract controversy. After all, it involves foreign profit seekers and Indian jobs.