Cheer in the Job Market, After Two Years; Now China Too Budgets for the Aam Aadmi 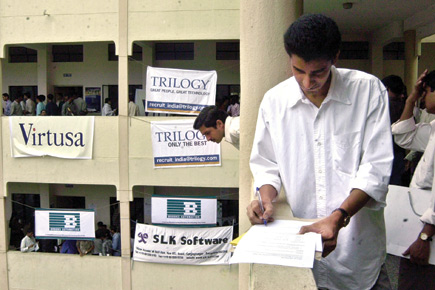 Cheer in the Job Market, After Two Years; Now China Too Budgets for the Aam Aadmi


Cheer in the Job Market, After Two Years

The good news was slow in coming but now it’s clear that India Inc is hiring again. The most dynamic sectors that have renewed hiring include: banking, insurance and—surprisingly—retail. “Last quarter saw a good profit graph for India’s big firms and they are hiring on the back of that growth. Sectors such as banking, software and infrastructure are looking up. It is on the back of actual performance that firms are looking to grow. This should help in sustained performance for the next two quarters. This will lend robustness to the economic recovery underway in the Indian economy,” says Anjan Roy, Ficci’s chief economist.In a recent survey, the HR consultancy Manpower found that 39 per cent of Indian employees were optimistic about employment prospects for the coming year. This is the highest percentage across 37 countries that were surveyed by the firm. Another HR consultancy, Hewitt Associates, has projected that India Inc will hike salaries by 10.6 per cent this year. This was also evident on day zero at IIM Ahmedabad last week, where global consultancies such as Boston Consulting Group and banks such as Merrill Lynch lined  up to hire students. A contrast from last year when many of the majors skipped placement days. The strongest sector—in terms of a comeback in the sphere of job creation—has been software, with top firms like Infosys and TCS leading the pack. The software sector is expected to create about 150,000 new jobs this year, according to Nasscom. This is a sea change for an industry that froze salaries and even handed out a lot of pink slips to staff last year. After two years of almost zero growth, this may be the best time to enter the job market.

Now China Too Budgets for the Aam Aadmi

Even as China continues its 8 per cent growth rate amid global recession, the Chinese leaders are nervous. At the National People’s Congress, Chinese Premier Wen Jiabao outlined his own version of plans for the aam aadmi—Chinese style.

Gone is the emphasis on breakneck growth and in comes sustainability. The Chinese government has hiked social spending by 8.8 per cent and rural outlays have been increased by 12 per cent, according to Reuters.

At the same time the dragon has not lost sight of its defences, with the budgetary allocation for military spending rising by a hefty 7.5 per cent over 2009. The Chinese, of course, have much more room to manoeuvre than Western countries, since its budget deficit is only 3 per cent of its GDP—compared to a budget deficit of 10 per cent for the US economy.

The Chinese Communist Party is unhappy about frequent signs of protest and dissent that the ever-widening income gap in that country has created.  It is hoping that the massive stimulus spending on infrastructure last year, amounting to $585 billion, along with fresh impetus from the latest initiatives, will lead to some social stability at least in the short term.