The Ambassador Is Unwell; Across the River Charles 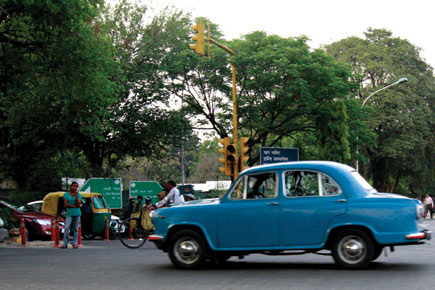 The Ambassador Is Unwell; Across the River Charles


The Ambassador Is Unwell

After years of sputtering along aimlessly, the frail and creaking Hindustan Motors, India’s oldest car company, and the maker of Ambassador, it seems has finally seen the writing on the wall and decided to get itself admitted to an intensive care unit. According to a statement it has filed with the Bombay Stock Exchange, HM has approached the Board of Industrial and Financial Reconstruction, a Government body that supervises sick and near-bankrupt companies, after its networth halved from its peak in the last four years. The CK Birla-promoted firm’s accumulated losses till 31 March 2009 were Rs 131 crore, and it had a debt of Rs 127 crore on net sales of close to Rs 570 crore. Since 2008, its market value has eroded almost 70 per cent to Rs 350 crore currently. Almost every second year, the company would try to give the ageing Ambassador a makeover, but despite the efforts the car today is nothing more than a nostalgist’s delight. The bloated, bowler hat-shaped Ambassador, a copycat of the British Morris Oxford, was the first car to be manufactured in India. For more than 30 years, it was India’s largest-selling car, and even when it was faced with competition from a spiffier Maruti, the Ambassador was the car of preference for all government departments. Its halcyon days are long gone, and HM barely manages to sell 12,000 Ambassadors a year. Maruti’s Alto, the top-selling car in India, by contrast almost sells twice the number every month. It is ironical that at a time when India is fast emerging a global small car hub, its oldest carmaker is staring at bankruptcy. To add to its woes, HM’s CEO Ravi Santhanam also quit last month. HM also assembles and sells Mitsubishi Motors’ Lancer and Cedia sedans, and the Outlander and Pajero SUVs under technical collaboration. The company has three plants in West Bengal, Madhya Pradesh and Tamil Nadu, and most analysts see value only in the real estate the company owns. How long can HM  piggyback on nostalgia?

Across the River Charles

Nitin Nohria, the noted management professor of Indian origin, is the new dean of Harvard Business School (HBS). His appointment is crucial, coming as it does in the background of the financial scandals that triggered the US economic crisis. Professor Nohria has done distinguished work in the area of leadership and ethics. His job will be to steer HBS through an era of turbulence. The University’s endowments are down from a peak of $36 billion to about $26 billion. Nohria is an IIT Mumbai alumnus and has co-written 12 books, most recently the Handbook of Leadership Theory and Practice which he co-authored with HBS colleague Rakesh Khurana. His work has stressed the need for reputation to be at the centre of business administration. He is known to be experimental and believes that while the case study method is important, it is critical for business school curricula to experiment and develop new methods of real world relevance.