Bloodshed In the Online Marketplace

How e-commerce firms, their war chests overflowing with recent funding, are taking on each other like never before 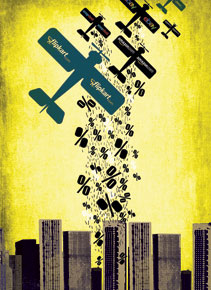 How e-commerce firms, their war chests overflowing with recent funding, are taking on each other like never before

Waking up unusually early one Monday morning, I sat—groggy and sleepy, yet palpably excited—in front of a computer. In a few minutes, at eight o’clock to be precise, the virtual doors to Flipkart’s much publicised ‘Big Billion Day’ sale was to begin. And I wanted to check out the products before others started logging in. But when it started, the sale was nothing short of a mad scramble. There were pen drives for Re 1, cellphones for Rs 99, computer appliances and cameras with discounts of around 90 per cent. As it turned out, there were a number of people who, just like me, had woken up early for the sale, some even smart enough to foresee the rush and narrow down and add to their ‘carts’ what exactly they wanted days in advance. The website became slower to load. It crashed multiple times. And every time it recovered, there were fewer products to be chosen from. Within minutes, sometimes seconds, most of the best deals were now hidden behind ‘out of stock’ signs. Everything, it seemed, mattered—the speed of the broadband connection, the promptness of your decisions, the agility and speed of your clicking index finger, the familiarity to navigate the website for products, even the ability to recover from the disappointment of someone else beating you to a deal. For me, it was all too much, and I had to log out.

In Delhi, a Mumbai-based assistant director who had travelled to the city for work, Krishna Rao, was late to the sale. He logged on to Flipkart only in the afternoon. “There were just vegetable cutters and appliances by then,” he says in condescension. “Until I came across this TV set.” Despite not wanting a TV set, the price of the product—just Rs 22,000 after a discount that slashed its price down from Rs 32,500— goaded him to replace the boxy CRT television set that occupied his living room with an LED set. He wanted to consult his wife and brother. He wanted to check who in his family or those in the neighbourhood would be available to receive the product’s delivery. “But the products were disappearing so fast. For a moment, even this product went out of stock. You had to make a decision fast,” he says. “So I bought it.”

In all, as Flipkart later revealed, the sale that lasted 10 hours generated revenues of $100 million. It sold a total of 2 million products. Around 500,000 mobile handsets, another 500,000 items of apparel and shoes, and about 25,000 television sets were purchased in all that day. But people were also upset. They railed about the injustice of not being able to purchase goods, and about prices that seemed to have been suspiciously raised before the discounts were displayed. They wrung their virtual hands and hashtagged the phrase ‘#Flopkart’. Yet, e-commerce, in all its glory and disappointment, it appeared, had finally arrived in India. Its potential had finally been revealed.

Apart from the festivities and the lights, Diwali isn’t only about shopping. It isn’t only about how much you spend. It is also about how much you save. Retailers and malls have played on that psyche for several years, enticing new customers and clearing old stock with discounts. Now e-commerce websites are using that same strategy, offering what seem like impossible discounts to wean away shoppers from not just brick-and-mortar stores but also other e-commerce websites.

Online marketplaces are locked in an intense battle to topple one another. Ever since Amazon entered the Indian market last year, the competition has heightened. Flipkart currently leads India’s e-commerce market, estimated at around $3.1 billion, but projected by the likes of NASSCOM to rise to $100 billion by 2020. Amazon has grown rapidly in a year’s time, and Snapdeal is quickly catching up.

Each one of them, now awash with funds, their war chests overflowing with recent funding—Flipkart raised $1 billion in July, Snapdeal raised $233.7 million this year, and Amazon promises to put $2 billion into its Indian operations—are taking on each other like never before. When Flipkart announced its sale with front page advertisements in leading newspapers, Snapdeal ensured it had advertisements immediately after Flipkart’s, dissing the other’s sale and pointing to its own. Amazon, according to media reports, purchased the domain name Bigbillionday.com, also the name of Flipkart’s sale, which would lead users to Amazon’s website instead. A few days later, when Amazon launched its sale, Diwali Dhamaka, Flipkart reportedly paid a similar compliment. According to a Times Of India report, when Jeff Bezos, the head of Amazon, recently arrived in India, Flipkart put up huge billboards of its advertisements at the airport, highways and areas close to Amazon’s offices to simply taunt the Amazon head. The e-firms are now buying out smaller e-commerce firms: Flipkart acquired the fashion e-tailer Myntra, and Snapdeal acquired Shopo.in, a handicraft e-commerce firm. They now also sponsor top events, from the last Indian Premier League (by Amazon) to Bigg Boss (currently being done by Snapdeal).

“This fight will only get more intense,” says Harminder Sahni, founder and managing director, Wazir Advisors Pvt Ltd, a retail consultancy. “E-commerce is still in a nascent stage, but is picking up rapidly. And each one of these firms wants to kill off competition and become the market leader.”

All e-commerce firms currently offer a number of features, from cash on delivery (CoD) to a no-questions- asked replacement policy. They all use a host of courier options, including India Post, to reach the most obscure of pincodes. Every little innovation or attempt is quickly replicated and bettered. When Amazon India introduced next-day guaranteed delivery, Flipkart and Snapdeal quickly followed suit. Flipkart promises next-day guaranteed delivery in 50 cities and guaranteed next day delivery on Sundays. A spokesperson of Flipkart says, “We have always believed in innovation—and our focus has been on launching customer facing features that can enhance the online shopping experience for the Indian shopper.” Speaking about the firm’s future plans, the spokesperson adds, “We are tying up with more and more sellers from smaller markets. We believe that the smaller artisans and manufacturers from across the country are the future of online marketplaces in India… We will also look at expanding our seller base—and entering newer categories such as furniture.” However, almost all the companies in e-commerce are currently running losses. Snapdeal reported losses of Rs 264.6 crore for the year 2013-14, compared with a loss of Rs 120 crore in the previous year. Flipkart reported a loss of Rs 281.7 crore for the financial year 2013-14, up from Rs 109.9 crore the previous year. But these e-firms seem to believe that the focus now should be on expansion and market creation rather than turning profitable. The Flipkart spokesperson says, “We can be profitable today if we choose to be. But for us, the key issue is not profitability but growth. The potential we are witnessing in the Indian e-commerce ecosystem today makes it amply clear that there is a lot of scope to scale up the business. And we want to keep investing in the business while we see such growth.”

According to Ashish Jhalani, founder of Etailing India, an e-commerce consultancy in Mumbai, despite the vast potential for the growth of e-commerce in India, a large number of customers are still wary of shopping online, and the recent sale organised by Flipkart has worsened matters. “The sale made people more suspicious of online shopping, particularly at Flipkart. No wonder that despite making great sales, Flipkart’s founders apologised,” he says. “But unless the suspicion of online shopping in general is addressed, we won’t be seeing any of this fantastic projected growth.”

Many e-commerce ventures, especially relatively smaller firms, are trying to address such fears. Zivame, which sells lingerie online, allows users in Bangalore, where it is based, to order up to 10 items of innerwear to try out in the privacy of their homes, before deciding to buy any. It has also set up a fitting lounge in Bangalore, where, with an appointment, fitting experts help women try various different types of innerwear. Fashionara, which retails clothes and shoes, allows users of the six largest cities to order a number of items to their homes or offices, and try them on before purchasing any. The delivery agents are also trained in measuring an individual should the need for alteration arise. “The key,” says Arun Sirdeshmukh, founder of the e-commerce firm Fashionara and former CEO of Reliance Trends, “is to replicate the experience of buying from a traditional store as much as possible, where one can touch, feel—and maybe even alter—products [that one intends to buy].” According to experts, which e-commerce firm eventually emerges as the strongest will be determined not by the discounts offered, but by how it differentiates itself. Sahni says, “Everyone will provide the same discounts, and currently almost everyone has the same products. But will you be able to provide exclusive products? Can you build niche segments? You cannot give huge discounts always. This is the reason that Xiaomi phones or a Chetan Bhagat book is launched on Flipkart.”

Some e-commerce firms are already trying to target specific consumers. The likes of Yepme target customers in smaller towns and cities and produce private labels that are stocked not just on its own website, but also on others. Zivame sells not just global brands but also affordable ones that it makes itself. Richa Kar, co-founder and CEO of Zivame, says, “At a category level, we saw some big gaps in the [lingerie] market. First we tried to bridge them with products of international brands, but soon realised that this would not work for a large number of our customers, as the products were expensive. Therefore, after adequate research, we decided to launch our own brands.” According to Kar, the firm sells over 100,000 products every month.

Fashionara focuses less on discounts and more on convenience. Apart from letting buyers try out clothes, it also offers several kitschy colourful products that are usually available only in street markets. It also has shopping assistants who chat with customers over the telephone and help them locate and buy what they’re looking for.

On 11 October, Rao had yet to get the TV set he ordered on 6 October. This, despite being promised a next-day delivery. “They keep postponing the date. Now they want to deliver when no one is home. I’m sure they don’t even have the product and are trying to source it now,” he says, angry about the dodgy reliability of e-commerce firms. “How can you trust them when something like this happens?” A few days later, he laughs and says he is willing to give e-commerce firms another chance. He got his LED set on 12 October.