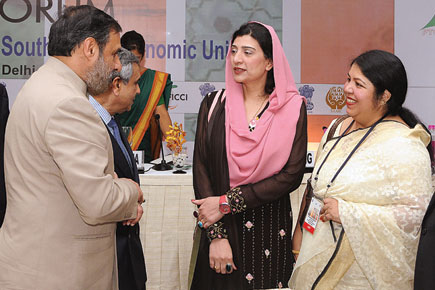 
The South Asian Forum, newly conceived along the lines of the World Economic Forum, has been discussing the idea of an economic union across the region. It’s a lofty goal, and envisages a common market of at least 1.6 billion people. Is it realisable? On this, opinion is as crisscrossed with divisions as South Asian politics itself. The region, pessimists say, is destined to remain the biggest single market that never was. Just the political challenge could make anybody shudder. Right now, even the European Union is wracked with incohesion, and it was a well-reasoned project that began modestly as a common market for coal and steel back in 1950.

This Subcontinent’s starting point, the South Asian Association of Regional Cooperation (Saarc), is modest too—and with much to be modest about. But the region, say optimists, is not just a geographical term a la the equator. “The comfort level among Saarc countries has improved a lot, and considering the fact that they are all democracies now, the ambience is relatively supportive of better economic ties,” says Dr Sheel Kant Sharma, former secretary general, Saarc, a grouping of India, Pakistan, Bangladesh, Bhutan, Nepal, Sri Lanka, Maldives and Afghanistan.

Yet, since Saarc’s initiative of a South Asian Free Trade Area (Safta) vowed to eliminate all trade barriers within the region in 2006, little has been achieved. Exemption lists have come in the way, and trade via the Safta window remains less than half a billion dollars, even as trade via bilateral deals touches $18 billion. “These bilateral agreements, despite whittling down the importance of Safta, are Safta-plus and also politically important,” says Biplab Chatterjee of Consumer Unity & Trust Society International (Cuts), “That is why they are happening.” However, DK Nair of the Confederation of Indian Textile Industry disagrees: “These bilateral deals often sacrifice the interest of domestic industries for geo-political objectives, which may or may not be achieved.” His statement needs be read in the context of India’s recent move to allow duty-free imports of Bangladeshi garments.

Done across South Asia, though, could garments do for the region what steel did for Europe? Experts are unsure. With the services sector now accounting for over half the region’s GDP, they want an open market for services such as telecom, infotech and aviation to set the pace for better inter-connectivity. According to Saarc data, 72 per cent of the region’s trade potential—placed at $65 billion in 2010-11—was lost due to poor connectivity. “As against a ‘beggar-thy-neighbour’ policy, the spirit of Safta should be based on ‘help-thy-neighbour’,” says Chatterjee, “And as the largest economy in the region, India bears the main responsibility.”