An Airline of the South Called Air Costa

Regional airlines have all been failures in India, but Air Costa hopes to beat the pattern 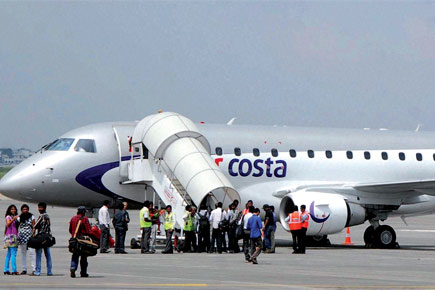 Regional airlines have all been failures in India, but Air Costa hopes to beat the pattern


Undeterred by the fact that all earlier attempts to run a regional airline in India have skidded off the runway, Air Costa, a new airline that serves South India, has just taken wing. Will it attain the operational viability that others failed to achieve? Since 2007, India’s regional aviation policy has offered small aircraft cheaper (lower-taxed) fuel and waivers of landing and parking charges at non-metro airports. “Despite these concessions available to regional carriers, India has no successful standalone regional airline,” says Binit Somaia, an aviation expert at Centre for Asia-Pacific Aviation. This suggests that the key to regional success lies beyond government policy. Does the promoter of Air Costa, a Vijayawada-based real estate player called the LEPL Group, have what it takes?

Analysts say that the viability of regional operations depends on managing the cost structure, especially in the initial phase. This demands top efficiency as well as high levels of capitalisation to survive tough periods, something that failures like Paramount, MDLR and Air Mantra lacked. Captain Babu, CEO of Air Costa, claims to have both conditions met: “Air Costa’s hardcore professionalism will help us manage our costs and do things right.” As a start-up with only two 67-seater Embraer-170 planes, Air Costa will first need to study the southern market, for which demand analysis and route selection will be crucial. This is no easy task. According to a recent Deloitte report on regional aviation in India, delays in optimising a network result in heavier learning-curve losses, ‘thus increasing the sunk cost for regional aviation’. If all goes well, Air Costa expects to have a fleet of five planes next year. “It would be market-driven expansion,” says Babu, “as opposed to one where players first expand and then look at the market.”

Air Costa’s main competitive challenge may well be from another new low-cost carrier: Air Asia, a part venture in India of the Tata Group (whose Singapore Airlines JV has also been approved) that plans to exploit the regional market rather than rely on overcrowded metro routes.

Analysts argue that India’s aviation policy, which mandates that all-India carriers allot some seats to under-served routes, restricts market opportunities for regional players. For regional airlines to work, they recommend a policy balance between all-India and regional carriers that gives the latter sufficient space to operate.