‘Assange is living in Dickensian conditions, may contract Covid-19’ 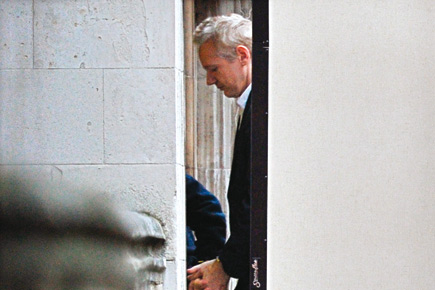 Dr Suelette Dreyfus, Julian Assange’s co-author and friend who has been in touch with the Wikileaks founder until recently, says that the prison he is in, HMP Belmarsh, is a deathtrap because of Covid-19. “Prisoners in the US and Iran are being released for this reason – surely the UK could do this as well?” asks the noted writer and researcher. The pandemic is poised to sweep through the prison population in UK while Assange, 48, has been on remand since September last year. Australia-born Dreyfus, who co-wrote Underground with Assange, tells Open in an interview that there is no such thing as social distancing in UK prisons. “If that happens, we’re talking about Dickensian conditions, rows on rows of beds with sick and dying people, without proper medical treatment for all, and disease spreading its evil fingers unchecked,” she says, adding that his trial, due in May, may be further postponed due to the pandemic. His lawyers have moved the court seeking a bail citing Covid-19. The US wants him sent there to face trial over publishing about its wars and foreign policy. Edited excerpts:


How justified are Assange’s lawyers in using the corona pandemic as a reason to get him a bail? Or is it more of a ruse?

He doesn’t belong in jail. He’s not being tried for any crime in the UK. In the eyes of the law there, he has no outstanding criminal charges in the UK. He is being held in prison simply because the US wants to extradite him. The US wants to extradite him for ‘crimes of journalism’ – in other words, doing his job as a publisher and journalist in reporting accurate facts. They may be uncomfortable facts, but they have been proven to be accurate reportage – all of them – because he has also reported the supporting source documents. The prison he is in is a deathtrap because of Covid-1. Governments must release non-violent prisoners to their families and loved ones, or there is a chance they will die inside. Prisons in the UK are overcrowded, and do not have the medical facilities to cope with a pandemic sweeping through the prison population. The global pandemic has made this a humanitarian issue of significance.

This is true in many places, for example there have been calls for the same in New York, where many inmates are being held on remand, meaning they are innocent people in the eyes of the law because they have not been convicted of any crime by a jury or judge.

Sometimes when people think of prisoners, they think all are hardened criminals. Many are on remand, or have committed non-violent crimes. Think about how frightened you are of the pandemic right now, how you may be sheltering in your home, pulling your family close, trying to escape exposure to the world. Well, in his prison there is no escape, no sheltering possible from a virus outbreak. There is no such thing as social distancing, nor disinfecting surfaces. Your pillow may be a metre from the next person’s. You have no way to protect yourself. And if you get sick because Covid-19 rips through the population, there is no way the prison has enough assisted-breathing devices to support life for everyone who gets the virus. Without this medical support, perhaps a third of the patients who become seriously ill who have pre-existing conditions and respiratory failure may die. This is what I mean when I say the prisons are a death trap in a pandemic. We’re talking about Dickensian conditions, rows on rows of beds with sick and dying people, without proper medical treatment for all, and disease spreading its evil fingers unchecked.

Now prison visits have been cancelled across the UK, there is no way for his family or his legal team to meet with him in person, and check on his welfare. Even the British prison staff and management want non-violent offenders released because they understand what is coming if that doesn’t happen. Nine hundred prison officers have had to be off work to self-isolate. Prisoners in UK prisons have already tested positive for the virus. It’s starting. And what happens when those non-violent offenders are released back out into the community in two months? If the prisons have been hothouses for the disease, the community will suffer. Prisoners in the US and Iran are being released for this reason – surely the UK could do this as well?

Does the UK’s justice system want to be the cause of Julian Assange’s death in prison? I hope not. There are humane and good judges and staff in that system who would likely see it would be a tragic outcome for all – for him, his family, for freedom of the press as a principle, for the world’s view of British courts. No good can come of it. Yet the risk is enormous, if he is not released on bail, that it will happen. I hope the ministers making this decision reconsider their decision on humanitarian grounds.

The Covid-19 epidemic can make us frightened and insular, but there is also the chance here for us to be kinder, more patient and empathetical, more willing to stop cruel decisions that cause hurt to others.

Have you been able to communicate with Assange after he went to jail?

Yes, and I am extremely worried for his health in this situation.

How fragile is his health?

His health is very fragile – and continues to be. We know this from multiple reports from credible places and doctors. It is inhumane to leave him in the prison, which may soon be inescapable from the virus.

Assange’s trial began last February. It is now postponed until May. Do you fear it will be further delayed due to the spread of Covid-19?

Yes. I fear that because of Covid-19, the court case – which is not a trial as one might have a trial for a crime – may be postponed or otherwise held without public witnesses, and therefore accountability. This is only a court case to decide the extradition request from the US.