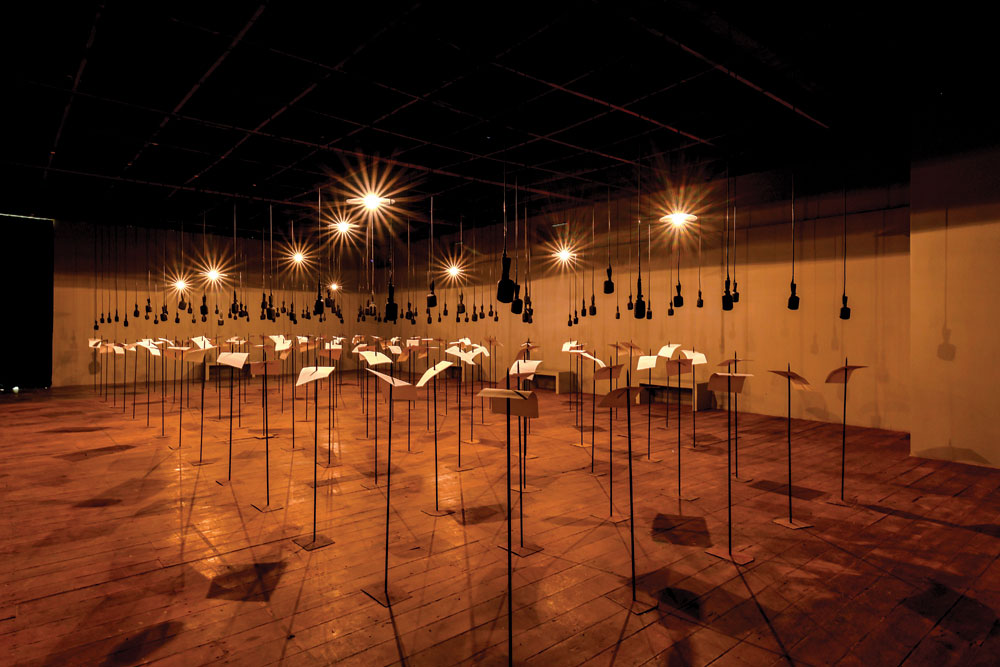 
IT WAS A little past midnight. In front of Mumbai’s Gateway of India, hundreds had gathered. People sat in concentric circles, some hoisting flags atop pillars and trees. At the centre of the gathering, two people began to sing into a microphone. Their voices were shaky, noticeably offkey. But they continued to sing loudly and with fervour. Soon, the entire crowd was faltering along with the song, some softer than others. A few, more in tune. In the last few months, Faiz Ahmed Faiz’s poem, ‘Wa-yabqa-wajh-o-rabbik’ (commonly known as ‘Hum Dekhenge’ and popularised by the Pakistani singer Iqbal Bano) has spread like wildfire. During the anti-CAA-NRC-NPR protests, people have been singing it everywhere, from the Gateway of India to college campuses to outside the Indian High Commission in Cape Town. ‘Hum Dekhenge’ has been a powerful protest poem for decades. When Bano sang it in Lahore in 1986 during Zia-ul-Haq’s regime, the crowd had broken into slogans and cheers. They shouted ‘Inquilab Zindabad’ in between verses, forcing Bano to pause several times for applause. At the Gateway that night, too, people clapped ecstatically at the most famous line of the poem: ‘sab takht giraaye jaayenge/sab taj ucchale jaayenge’ (When the thrones will be toppled/the crowns will be tossed).

Revolutionary poetry has persisted through time. And it has flourished. Even if written for a particular historical moment or political struggle, people have found meaning and fortitude in these poems, eras later. Poems, because they can be both anthem and salve, both command and prayer, are themselves insurgent. They can converse with power. And so, they can be dangerous. No wonder then, that an IIT took it upon itself to decipher the ‘true meaning’ of the poem’s third stanza. Or that poems written as part of the Miya poetry movement—which speaks of the struggles of Bengal-origin Muslims in Assam—have been at the receiving end of FIRs and public indictment.

In times of ferment, poetry always seems to find new believers and detractors, too.

Last year, the Kochi Biennale showcased an installation by the artist Shilpa Gupta called For in Your Tongue, I Cannot Hide. The room was dimly lit, with a maze of iron spikes arranged inside it. The tips of the spikes had pierced through little sheets of paper—each was a poem by one of a hundred poets who had been imprisoned throughout history. Overhead, through tiny speakers camouflaged within microphones, fragments of different poems came in waves—sometimes as chorus, sometimes as a solitary voice. Walking through Gupta’s installation, the audience was haunted by language. Words pined for love, for country, for a different future. In that enveloping darkness, poems promised that the world will not remain as it is.


Shilpa Gupta’s installation, the audience was haunted by language. Words pined for love, for country, for a different future

That poetry can evoke a time beyond its own means that it is not static. So often we say it moves us. This idea of movement is inherent to both poetry and revolution. In a sense, it is their very aspiration. Perhaps that is why one has always accompanied the other. At their most basic, poems of protest can literally move people out onto the streets. Faiz wrote a poem called ‘Aaj Bazaar Mein’ in which he says:

Teary eyes and a fiery heart are not enough.
It is not enough to harbour a cloaked love.
You must walk today in the marketplace with your feet in shackles.

On January 11th, 2020, students of Aligarh Muslim University marched in protest, having literally chained themselves to each other. For a few hours, it seemed as though life had indeed imitated poetry.
But revolutionary poetry allows us also movement that isn’t so literal. It is the movement towards a collective belief, a sense of solidarity. In the recent protests, people have clung to Varun Grover’s ‘Hum Kaagaz Nahin Dikhayenge’. The likes, retweets and Instagram covers of Iqra Khilji’s ‘Aabad Hai, Aazaad Hai’ or Aamir Aziz’s ‘Sab Yaad Rakha Jayega’ too are proclamations of a common, dissenting spirit. Each of these poems does the work of resistance—they remind the dissidents what they are fighting for and they assure the weather-beaten that even in dark times, one must keep faith.

FOR MANY OF Faiz’s contemporaries poetry was indeed work, labour. Kaifi Azmi, Makhdoom Mohiuddin and Sardar Jafri—who all had communist associations—saw poetry, of course, as creative expression but also as responsibility towards the nation. What is interesting, though, is that they didn’t write every poem to be an anthem. Or to proclaim the hopeful ever-after. Often, their poems lamented the sordid condition of the world or the many ways in which they had failed it. Makhdoom writes:

‘I am sad that my precious life
has become a prison offering.
Why wasn’t it sacrificed for the freedom of my imprisoned country?’

Here, Makhdoom calls out his own failure to be a martyr—it is a personal lament. But in describing his so-called redundancy in the political struggle, he seems also to be urging others to be more passionate, perhaps even reckless. And in that, his poem finds purpose.

Selling martyrdom might seem an excessive proposition. But protest poetry is made of excesses—that is why it succeeds. Giddied by rage, shaking with hope, we believe in the poems. The Marathi Dalit poet Namdeo Dhasal used excess deliberately and powerfully. In one poem he writes:

‘Man, one should tear off all the pages of all the sacred books in the world
And give them to people for wiping shit off their arses when done
Remove sticks from anybody’s fence and go in there to shit and piss, and muck it up Menstruate there, cough out phlegm, sneeze out goo
Choose what offends one’s sense of odour to wind up the show
Raise hell all over the place from up to down and in between… .’

By writing with a complete disregard for propriety and offence, Dhasal constructs here a revolutionary impulse that works in two ways. For those oppressed by the caste system, these uncensored words might be fuel to upturn the world. And for the privileged, these same words destroy the status quo; they demand that the reader confront the injustices in which they have been complicit.

But as much as poems of protest can be loud and aggressive and marshal people into action, they can also be a quieter experience. If revolutionary poems are meant to help build faith in a cause and a future, that sense of faith can be understood more gently. The 12th century Kannada mystic poet Akka Mahadevi wrote vachanas (spontaneously recited poems) that professed her love for and devotion to Shiva. Through her poems, we learn that she rejected conjugal relations and the earthly confines of clothes and family. Legend has it that she roamed naked, covered only by her long locks of matted hair. Mahadevi writes:

‘People,
male and female,
blush when a cloth covering their shame
comes loose
… When all the world is the eye of the lord,
onlooking everywhere, what can you
cover and conceal?’

While expressing her own spirituality, Mahadevi also proclaims her defiance. She refuses the strictures of gender roles and marital duty and also the notion that faith must be practised by a single code. And yet, none of these ideas are framed as diktats or moral prescription. Centuries later, in these personal and religious poems, we might find defences for secularism and feminism. Today, we can render her poetry revolutionary for ourselves.

The American poet Carolyn Forché writes of a ‘poetry of witness’. This poetry, Forché argues, transcends the limitations of personal poetry and political poetry as strict categories. Instead, such poetry ‘reclaims the social from the political’. Rather than being a simple call to action or a polemic, it bears witness to historical brutalities, so that we may never forget them. In a sense, a poetry of protest and a poetry of witness are closely related. To witness exile or dictatorship through a poem is akin to staying informed, reading the news even. When we read poems written during the Holocaust, for instance, we are reminded that someone has lived them.

Today, we inhabit an age that inundates us with news. We know of a calamity the moment it breaks. But that constant immediacy can be crippling. Because to constantly witness the world and its struggles with empathy is not easy. In his famous poem, ‘The Country Without a Post Office’, Agha Shahid Ali recognises this. Though not a revolutionary poet, he seems to be a poet of witness. In many poems, he positions himself explicitly as ‘witness’, the Arabic meaning of his name. He writes:

‘In this dark rain, be faithful, Phantom heart,
this is your pain. Feel it. You must feel it.
‘Nothing will remain, everything’s finished.’’

Later, Ali implores, ‘Mad heart, be brave.’ It’s a simple ask. To read. To feel. To witness, despite our sorrow. And though it might be easier to be brave in poems, it also possible to be brave because of them. When Ali beseeches us readers to read Kashmir amid its silence, he asks us to stay with the poem, to be faithful to pain that is not ours. For Ali, reading that poem can be both protest and tenderness; it is a way to be present for ourselves and for the lives we often forget beyond our own.

There is an often misquoted statement about the purpose of poetry that comes from WH Auden’s ‘In Memory of W. B. Yeats’. It goes, ‘For poetry makes nothing happen.’ But this fragment, so wrongly touted, is only a fragment of a complex and beautiful celebration of poetry:

‘For poetry makes nothing happen: it survives
In the valley of its making where executives
Would never want to tamper, flows on south
From ranches of isolation and the busy griefs,
Raw towns that we believe and die in; it survives,
A way of happening, a mouth.’

In Auden’s understanding, poetry, even if it doesn’t bring that damned revolution, does something more enduring—it survives through time as a ‘mouth’, an articulation of that which we struggle to say or have yet to see. And so, revolutionary poetry will never sit idle—it will continue to document and inform, rupture and heal.