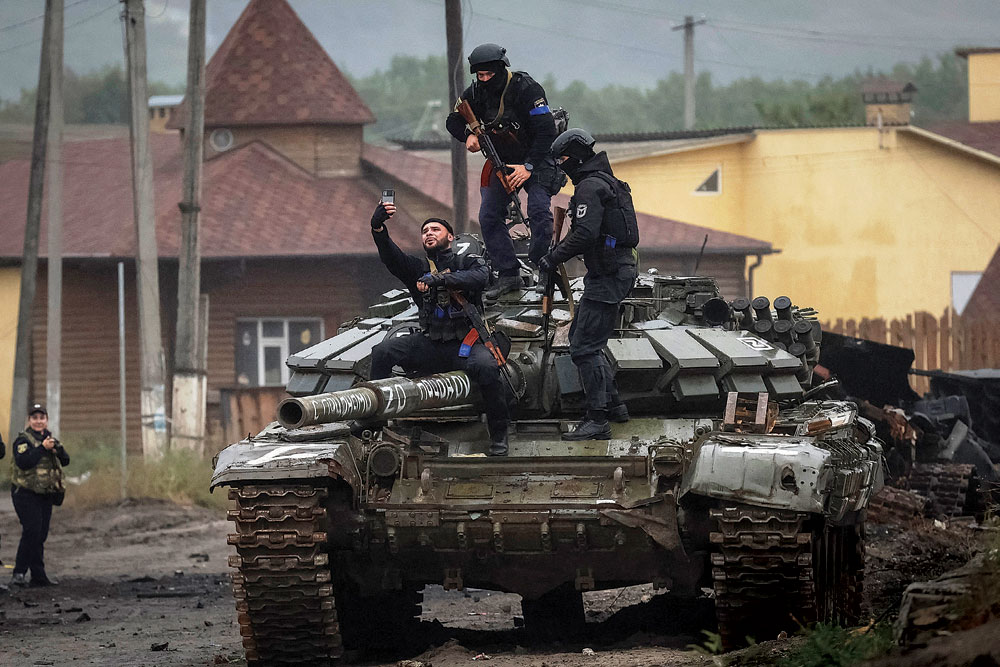 
MEETINGS OF THE Shanghai Cooperation Organisation (SCO) attract attention, sometimes due to factors that lie outside the agenda of such gatherings. In July 2015, Prime Minister Narendra Modi and then Pakistan Prime Minister Nawaz Sharif met on the sidelines of a BRICS and SCO summit in Ufa in Russia and the resultant joint statement promised a meeting between respective national security advisors to “discuss all issues connected with terrorism”, leading to a strong blowback in Pakistan that caused Sharif much grief. It proved to be the last meaningful engagement between India and Pakistan for some time as two years later Modi and Sharif merely exchanged pleasantries at Astana. This time, expectations of Modi meeting Nawaz’s younger brother Shehbaz, now the Pakistan prime minister, are quite low. The overhang of the Ukraine war and the recent unexpected gains of Ukrainian troops at the expense of the invading Russian forces have cast an intense spotlight on the SCO summit in Samarkand in Uzbekistan this week where some of the principal characters of the war will be present and watched closely for any hint they might offer about the course of the hostilities.

Russian President Vladimir Putin, who perhaps faces the most challenging of times since he sent troops into Ukraine in February, will find his strongman image on trial with all eyes on his meeting with Chinese President Xi Jinping. Although China is not directly involved in the war in Ukraine, it is Russia’s chief backer, its diplomatic and economic lifeline. At a time when the West is bearing down on Putin, the Russian leader can expect Xi to stand by him and recommit Beijing for a partnership described by the two nations as one without limits. China has not resiled from its support of Russia, endorsing Putin’s accusation that an expansionist NATO was the cause of the crisis. In turn, Russia has stood with China over its criticism of US House Speaker Nancy Pelosi’s visit to Taiwan. But as Putin and Xi are likely to reiterate their partnership, there is a growing imbalance in their ties which may well be a cause for concern in New Delhi. The exact extent of the gains by Ukrainian forces—and how permanent these might be—is not clear. Some observers feel that assertions of 6,000 square kilometres of territory being regained might need more scrutiny. However, it does appear Russia has faced reverses in the eastern and southern parts of Ukraine and this could well serve to increase Putin’s dependence on China. Apart from the diplomatic support it can offer as a veto-bearing member of the P5 at the United Nations Security Council (UNSC), China is a major buyer of Russian energy, helping to sustain its ally’s economy. The two nations share a border of about 4,200 km that can be used for transportation and trade as well as emergency supplies, if needed. Till as recently as June 2020, when the India-China confrontation in Ladakh flared up, Russia resisted pressure from Beijing and did not go back on its defence commitments to India. It is very likely, feel observers in India, that China will press for its pound of flesh in future as it looks to gain leverage over India. Some Russian foreign policy experts recognise the “asymmetry” in Russia-China relations, which means Beijing has more options and bargaining power—an advantage it would not like to fritter away.


FROM THE INDIAN standpoint, a weakened Russia makes its strategy of balancing power blocs more complicated even as it seeks to maintain its strategic autonomy in international relations by forging close bilateral relations with several Western, West and East Asian nations, being part of initiatives like the Quad, the mini (US, India, Israel, UAE) West Asia Quad, and also engaging with ASEAN and the European Union (EU). With the South Asian Association for Regional Cooperation (SAARC) pretty much non-functional, India has sought to give new wings to regional connectivity through forums like the Bay of Bengal Initiative for Multi-Sectoral Technical and Economic Cooperation (BIMSTEC). India has refused to issue an outright condemnation of Russia and kept away from most anti-Moscow votes at the UN even as it has conveyed its unhappiness over the breach of Ukraine’s sovereignty and urged a negotiated end to hostilities. Apart from the fact that criticising Moscow would only enlarge China’s advantage vis-à-vis Russia, the Indian government is keenly aware of its defence dependency on Russian military products. As it is, the turmoil in the Russian supply chains has caused delays in certain manufacturing projects in India. However, India’s major international partners, including Asian powers, seem to be reaching an assessment that the Russian offensive has run into serious trouble. Russia has expended a considerable quantity of ordnance and is finding it difficult to keep some of the supplies flowing. Unlike Ukraine, it has not received a bounty of sophisticated armaments. There is, of course, another aspect to the equation as China may also recognise that while Russia may have become dependent on Beijing, it is also an ally with many liabilities. The 5,000-word joint statement issued after a Xi-Putin meeting on February 4 this year, besides condemning NATO expansionism (although it did not mention Ukraine), spoke of offering a new model that was superior to the Cold War political and military alliances. This pitch might run a bit thin given how quickly Putin achieved pariah status soon after the joint statement was issued. Even countries not so invested in the war have been dismayed at the shock waves that have shaken their economies as the Russian invasion of Ukraine led to a sharp rise in wheat and energy prices followed by high inflation just when the world was stepping out of the shadow of Covid.

Though the unequal nature of Russia-China ties worries India, the unexpectedly successful resistance offered by Ukraine also holds a lesson that wars might be a lot less winnable than before. The rallying around of Western nations to Ukraine’s cause certainly surprised Putin and it is clear that his military calculations have not borne fruit. Reports indicate that with the help of Western satellites and military expertise, Ukrainian forces have launched precision operations to turn the tide of the war, at least for now. Without putting boots on the ground, the financial measures taken against Russia, along with the supply of military hardware and intelligence to Kyiv, have bogged down Putin’s war machine. How the Russian president will react to the setbacks is a matter of speculation. So far, while there have been civilian casualties, Russia has not used destructive weapons to target civilian centres, in part to maintain its claim that Ukrainians are Russian citizens forcibly separated from the mother country, and also to avoid a situation where even countries so far neutral or guardedly critical condemn Moscow. Tensions are running high and Putin’s statements that the enlargement of the NATO-Russia frontier with Sweden and Finland abandoning their neutrality could have military implications have not helped matters. Whether Putin will be tempted to crack down and use heavier weaponry and target civilian centres to break Ukrainian morale remains to be seen but the odds against him have grown. This may not, however, lead to any serious opposition to Putin within Russia in the immediate future. “Russians are a proud people. Many of them genuinely feel that the West has been unfair to them and, in fact, seeks to suppress Russia’s rise. Putin has articulated this sentiment,” former high commissioner to Canada, Vishnu Prakash, who has also served in Russia, told Open. At the same time, Russia does face a predicament which could impress on China that use of arms, even against a smaller adversary, may not work out along expected lines.

For India, a weakened Russia makes its strategy of balancing power blocs more complicated. At the same time, Russia’s predicament could impress on China that use of arms may not go along expected lines

MODI’S MEETING WITH Putin will be watched as the prime minister is likely to review bilateral ties while reiterating the need to end the Ukraine war through talks. A meeting with Xi has been speculated since the disengagement at Patrol Point 15, the last friction area that resulted from China’s aggression in May 2020 along the Line of Actual Control (LAC), has been concluded successfully. The disengagement is accompanied by a neutral or buffer zone where neither side will patrol. This also means China is stepping away from the claim lines that it has alleged Indian troops have breached. While older sticking points like Depsang and Demchok remain, there might be enough of a thaw to allow the two leaders to meet. The SCO summit marks the rare occasion when Xi travels outside China following the Covid outbreak and comes ahead of a highly anticipated party congress scheduled for October 16 which is expected to endorse his third term as general secretary. It works to Xi’s benefit if his Samarkand visit signals that he is in control of relations with important nations and potential flash points do not cast a shadow on the prestigious party event. Chinese troops have pulled back from the points of aggression at Galwan, Pangong Tso and patrol points in the Gogra Hot Springs area without much gain. In fact, the tough and uncompromising Indian response has given China plenty to mull over as the utility of its “salami slicing” tactics along the unsettled border with India could be fading. It is a good moment for Modi to set out Indian red lines in case a meeting with Xi does take place.

The Samarkand confabulations are unlikely to result in any breakthrough. The bilateral exchanges and the summit itself will be an opportunity for some signalling though. It will be read to see how strongly Russia and China stand together, whether there is any thaw in India-China relations, and if India and Pakistan relations remain as frozen as they have been since the Uri and Pulwama terror attacks. There will be other shows as well, such as the traction Modi generates with leaders of the four Central Asian nations represented in SCO and how much headway Xi makes with them as well. Ukrainian President Volodymyr Zelensky has said the coming winter will prove decisive in determining the course of the war. Some observers feel that he could use his current gains to explore a ceasefire that will deliver his people from the ravages of a war that has seen more than four million Ukrainians become refugees. To speculate on whether
Zelensky can consider such an option, and what the Russian response would be, is akin to crystal gazing. The longer the war drags, the greater the uncertainties and more adroit the balancing India will need to do in order to protect its national interests.