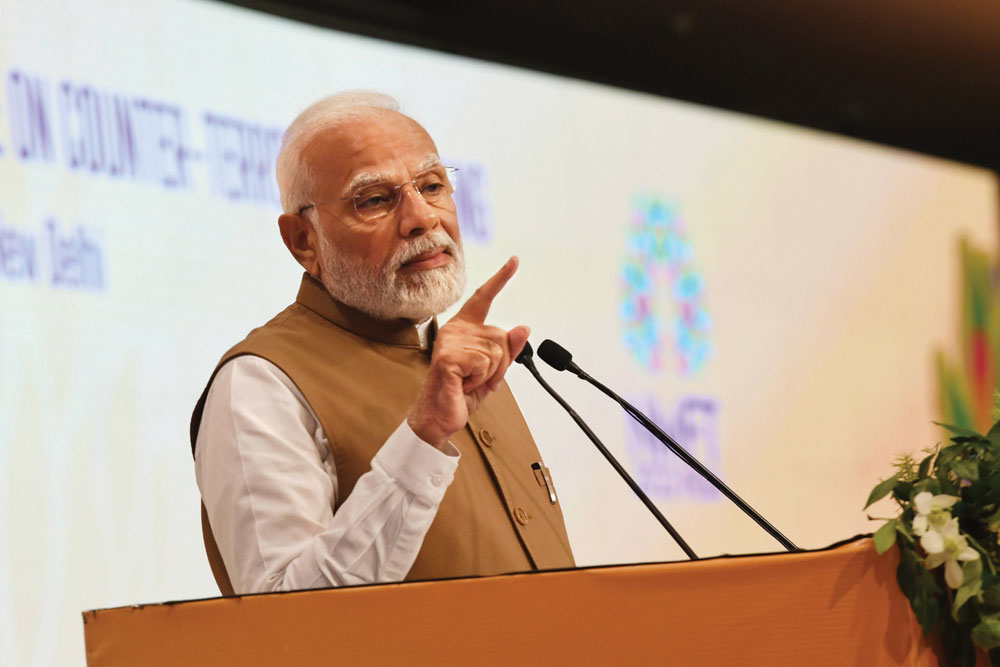 
MID-OCTOBER ONWARDS, NEW DELHI hosted no fewer than three international conferences to discuss the need to identify, define and contain terrorism in the age of new technologies, and to suppress money-laundering for criminal purposes that often ends up funding terrorists and terror organisations. A meeting of the General Assembly of the International Criminal Police Organisation (Interpol) was followed by the deliberations of the United Nations Security Council Counter-Terrorism Committee (CTC), and more recently India hosted the third No Money for Terror (NMFT) ministerial conference attended by 93 nations and organisations. The conferences spelt a bigger profile for India on the global stage on issues that are often politically contested and sometimes enmeshed in legal definitions that prevent a unified response to a threat that knows no borders and involves actors adept at the dark arts of cloaking their financial tracks. Though approaches to law enforcement differ, a shared syntax on terror financing can be detected with growing recognition that the misuse of modern technology needs a new and more cooperative approach to border control.

The discussions at the NMFT meet­ing gave India an opportunity to not only iterate its concerns about cross-border terrorism sourced from Pakistan but also put forward its learning gained from decades of anti-terror and counter-insur­gency operations that have reduced the levels of violence. It was in keeping with the objective of setting up a continuous and institutionalised process of consulta­tions that Union Home Minister Amit Shah proposed a permanent secretariat for the NMFT deliberations. It is under­stood that the proposal has been well received and the process of installing a secretariat will begin soon. More than an admin­istrative device, the secretariat will function as a think-tank and provide a platform for sharing experiences, practices and study papers on subjects like the complex world of the dark web and emerging technologies, said an informed source. The chair’s state­ment noted the need for consultative mechanisms in the light of the use of “official and unofficial” channels to fund terrorism. The statement also said that “[A]ctions to counter terrorism and its financing should be collective and unified, without exceptions on any ground and recommitted to a zero-tolerance approach to terrorism.” Read with the ministerial conference noting that ter­rorists accessing “safe havens” remain a significant concern, the conference reflected India’s view that terrorism should not be viewed through political prisms. Shah dwelled on the concern in his opening and closing addresses when he said, without nam­ing Pakistan, that there are countries that seek to hinder the fight against terrorism by sheltering and protecting terrorists.


The Modi government feels a sense of vindication about the discussions that reflect its concerns on terror-financing. The conferences have also allowed India to speak of its successes like strong anti-terror laws and the empowerment of agencies

Inaugurating the NMFT conference, Prime Minister Narendra Modi stressed the need to recognise terrorism without distractions. He said there should be no ambiguity in dealing with terrorism and warned against nations that use terrorism as a tool of foreign policy. Stating that even a single life lost to terrorism is one too many, Modi said, “There is no good terrorism and bad terrorism. It is an attack on humanity, freedom and civilisation. Only a uniform, unified and zero-tolerance approach can defeat terrorism. There must be a cost imposed on countries that support terrorism.” The prime minister warned against “indirect arguments” to support terrorism or block action against terrorists, a reference to both state support for ter­rorism and actions to prevent sanctions against terrorists, as has been the case with China blocking India’s bid at the UN to sanction the leaders of Lashkar-e-Toiba based in Pakistan. Speaking to the media in Delhi last month, Interpol General Secretary Jürgen Stock said a Red Corner notice cannot be issued if the re­quest is political, religious, military or racial in nature. He was responding to queries about Interpol rejecting RCN requests against persons like controver­sial Islamic preacher Zakir Naik and Kha­listani leader Gurpatwant Singh Pannu. Interpol’s interpretation that there is a “political dimension” to activities of individuals like Pannu, despite the long record of Khalistani outfits instigating and organising violence, has led India to repeatedly stress the need for an agreed definition of terrorism.

In his concluding remarks, Shah said, “We have to fight this war against terrorism and terrorist groups in every geographical space, in every virtual space. There have been many instances when, under the guise of other motives, some organisations promote terrorism and radicalisation at the national and inter­national levels… Recently, the government of India banned an organisation that conspired to radicalise youth and push them towards terrorism. I believe that every country should identify and take stringent action against such organisations.” The ref­erence to the recent ban on the Popular Front of India (PFI) was not missed. It is precisely the need for a convergence on defining terrorism and aligning laws and surveillance to cut through politi­cal and legal subterfuge that has led to the proposal for a perma­nent secretariat. India hopes that the threat of new-age terrorism will spur countries to consider active sharing of perspectives even if it does not immediately lead to formalised intelligence-sharing or a common definition of terrorism.

The risks that nations must analyse, the conference statement said, include hawala, cash, MVTS (money or value transfer servic­es), banking remittances, virtual assets, DNFBPs (designated non-financial businesses and professions), barter systems, non-profits and the use of unmanned aerial systems to transport drugs, arms, explosives and ammunition. The use of drones has been regularly detected along the border with Pakistan where UAVs (unmanned aerial vehicles) are used to supply terrorists and criminals with money and weapons. The Financial Action Task Force (FATF) came in for praise at all the conferences held in Delhi recently and the forum has seen Pakistan come under pressure for failing to act against terrorism. Yet, its procedures can be cumbersome given the need to apply various parameters in a non-discriminatory manner. The decision to take Pakistan off the grey list (when a country is subjected to increased monitoring and asked to address deficien­cies in dealing with money-laundering) is expected to result in more leeway for terror groups. Shah unambiguously noted the return of the Taliban in Afghanistan and the challenges this posed. “After August 2021, the situation in the South Asian region has changed. The regime change and growing influence of Al Qaeda and ISIS [Islamic State] have emerged as a significant challenge to regional security,” he said and reminded attendees how a similar situation had led to 9/11. “Along with Al Qaeda, organisations in South Asia like Lashkar-e-Toiba and Jaish-e-Mohammed continue to spread terror,” he said. Delegates said the roadmap mentioned by Shah included a monitoring network, harmonising of legal structures, and strengthening of regulatory structures. The home minister’s participation on both days of the conference was in­tended to underscore India’s commitment to the NMFT objectives.

It was in keeping with the objective of setting up a continuous and institutionalised process of consultations that Amit Shah proposed a permanent secretariat for NMFT deliberations. The process of installing a secretariat will begin soon

The Delhi declaration of the UNSC’s CTC also focused on tech­nology that can aid transnational terrorists. “The declaration aims to cover the main concerns surrounding the abuse of drones, social media platforms, and crowd funding, and create guidelines that will help to tackle the growing issue,” the UN said. There will be draft recommendations on terrorists’ exploitation of information and communications technology (ICT), such as payment technologies and fundrais­ing methods and misuse of unmanned aerial sys­tems. Besides, the “declaration also decided on a new set of non-binding guiding principles to assist member states in countering the digital terrorism threat… with a compilation of good practices on the opportunities offered by the same set of tech­nologies to tackle threats.” Like the NMFT and much of the Interpol deliberations, the UNSC CTC was also concerned with terrorist finances finding newer avenues that are more difficult to track without concerted international collabora­tion. Such a convergence requires a shared under­standing of methods used by terrorists and a deep knowledge of their organisational structures. The use of satellites gave intelligence agencies power­ful tools to interdict communication and monitor suspicious activity. The fields of quantum com­puting and Artificial Intelligence (AI) are vital to processing massive volumes of data scooped up by national agencies that use advanced algorithms to monitor everything from banking transactions to security camera feeds.

The Modi government feels a sense of vindica­tion about the discussions that reflect to a consider­able extent its concerns on terror-financing. The conferences have also allowed India to speak of its successes, with Shah pointing out that strong anti-terror laws and the empowerment of agencies have led to a low incidence of terrorism in India. The relative success of these strategies, particularly in the light of bold political decisions like the abrogation of Article 370 in Jammu and Kashmir, has led to a greater acceptance of India’s position and formulations on com­bating terrorism and to Delhi hosting influential gatherings. The policy dialogue is in keeping with the government’s political stance of being tough on terror and it can consequently look for benefits on this count. However, the persistent and enhanced threats in the neighbourhood, with Pakistan’s deep state viewing Afghanistan as a meanstoachievestrategicdepthagainstIndia, requireceaselessvigil and partners who share India’s urgency in countering terrorism.