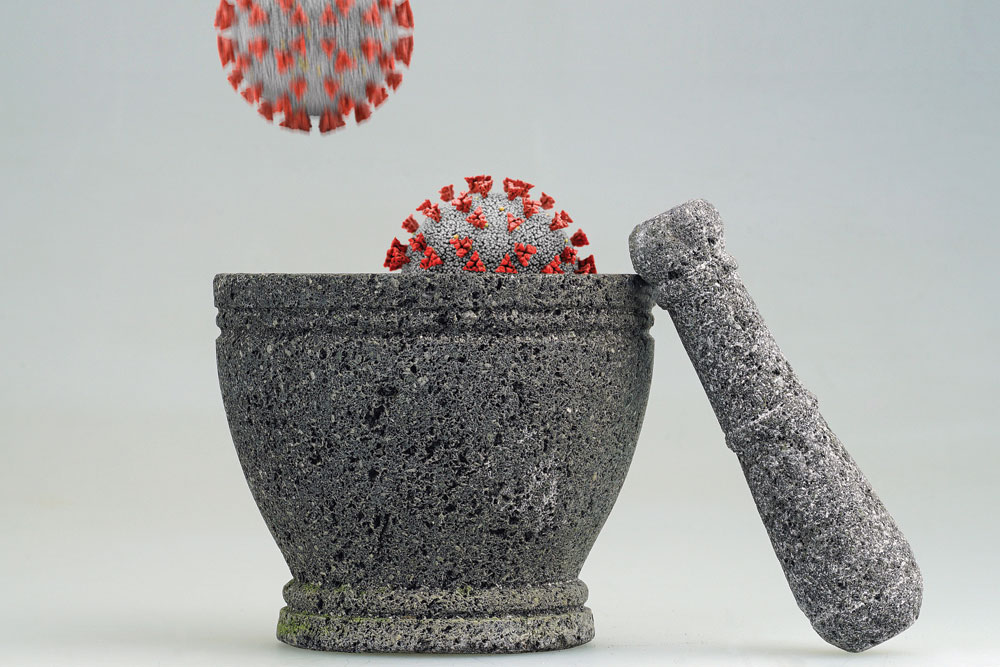 EVEN AS VACCINES, BREATHING AIDS AND A much-revised regimen of antiviral drugs are changing the coronavirus from what-we-die-from to what-we-live-with, those who lack access to or faith in the heroic science of fighting the big C, continue to look for hope in unlikely places. One such place is Krishnapatnam, a village in Nellore district, Andhra Pradesh, where Bonigi Anandaiah, a self-styled Ayurvedic practitioner, has been making and distributing a ‘cure’ for Covid-19 since mid-May. In a case of dying to get well, thousands began flocking to the village for this miracle remedy containing turmeric, cumin, nutmeg, camphor, cinnamon, pepper and other natural ingredients. The state government took note and promptly endorsed the medicine, despite the fact that it was yet to be certified as safe and effective by the Ministry of AYUSH. “A ban was out of the question,” says Kakani Govardhan Reddy, the ruling party MLA from Sarvepalli who has championed the cause of distributing the medicine statewide. “We have decentralised production and distribution. An expert panel is testing the medicine but for now, we have the experience of thousands of people in my constituency who have benefitted from taking it.” On June 7th, the Andhra Pradesh High Court permitted the distribution of the medicine to Covid patients while withholding approval for Anandaiah’s eye drops, which are claimed to increase oxygen levels, pending the report of an expert committee.

The bane of illness and the quest for a cure have been part of the human experience since the beginning of time. The California-based pharmaceutical company Gilead Sciences, which has been in the limelight for making crucial drugs for Covid-19, including the antiviral remdesivir and amphotericin-B, used to treat mucormycosis, references an ancient, Biblical medicinal perfume known as the balm of Gilead that was believed to cure a variety of ailments. Hyderabad has its own version of a cure-all: Zinda Tilismath—magic in a bottle. A woody, resinous, herby concoction coloured a bright red with alkanet root, it is manufactured at Karkhana Zinda Tilismath, founded during the Spanish Flu by Hakim Mohammed Moizuddin Farooqui, in Hyderabad’s Amberpet. A simple proprietary Unani formulation made of eucalyptus oil (80 per cent), camphor, menthol and thymol, it is applied topically or ingested to cure coughs, colds, stomach bugs, diphtheria, fevers—or any common ailment, for that matter. But it is during exceptional times that demand for the medicine really picks up. “Although Hakim sahab had formulated it earlier, he started mass production on demand in 1920 during the Spanish Flu. Since then, demand for the product has been rather seasonal—it picks up during the monsoon and drops in the summer. And every time there is an epidemic, we find that people reach for it as one of the most trusted home remedies,” says Saad Farooqui, a partner at Zinda Tilismath. The outbreak of swine flu in 2015 saw a big uptick in demand for Zinda Tilismath, he adds. The coronavirus has made it even more precious, with demand doubling in the past year alone. “Our primary markets used to be Telangana, Karnataka and Maharashtra. Now, we have set up a website to sell online in response to requests from across the country,” says Farooqui, who has pushed for greater automation of the factory. “While eucalyptus is an antiviral, we have never claimed that Zinda Tilismath is a Covid cure or a preventive agent. It is about the mindset and the beliefs of customers who have made it a household name over the years.” Zinda Tilismath’s bright orange packaging features a Siddhi man armed with bow and arrow, as the Nizam considered the tribe to be the epitome of strength and good health.


From tantriks sacrificing goats to the gods, to healers combing the woods for herbs and the DIY biology movement, practitioners on the fringes of conventional, traditional and alternative medicine have been busy finding and marketing shortcuts to not just good health but also absolution from a lonely death in a hospital

From tantriks sacrificing goats to the gods, to healers combing the woods for herbs and the DIY biology movement, practitioners on the fringes of conventional, traditional and alternative medicine have been busy finding and marketing shortcuts to not just good health but also absolution from a lonely death in a hospital. Alternative medicine brand Patanjali last year endorsed Coronil, a proprietary product, claiming a 100 per cent cure in seven days, only to be forced to backtrack and market it as a ‘Covid management’ medicine. A research paper co-authored by Acharya Balkrishna, MD of Patanjali Ayurved, claims: “It was shown that Coronil rescued humanized zebrafish from SARS-CoV-2 induced pathologies. Based on reported computational studies on the phytochemicals present in Coronil, it could be a potential inhibitor of SARS-CoV-2 entry into the host cell and associated cytokines’ production.” “In Ayurveda, there are no miracle cures. The philosophy is to treat patients, not the disease,” says Dr Krishna Das, a Thrissur, Kerala-based practitioner who has 30 years of experience.

Ayurveda has increasingly gone the OTC route in the past two decades, with trusted brands taking basic herbs like Giloy and Ashvagandha mainstream. The Himalaya Drug Company has been one catalyst in improving accessibility to Ayurveda across the country. It has also effectively tapped the lifestyle remedies market by going under the hood and developing proprietary products, including broad-spectrum immunotherapeutic drugs, slimming capsules, and the wildly popular anti-hangover pill, PartySmart. While the need for fast Ayurveda is only set to expand, none of these drugs is marketed or mistaken to be life-saving. “Himalaya’s proprietary brands, Septilin and Bresol, were studied clinically in combination in a reputed hospital and found to be useful in individuals struggling to overcome residual symptoms in Covid-19 post recovery. In another well-designed clinical study, our immunity wellness product, Immusante, in combination with the Pure Herb Guduchi, has been shown to have a protective role,” says Anil M Jiandani, Business Director, Pharmaceutical Division, in response to a query about Himalaya’s work on Covid-specific drugs.

At Arya Vaidya Sala (AVS), Kottakkal, a century-old Ayurveda centre in Kerala that employs classical therapies, Dr Madhavankutty Varier, the chief physician, says that while the acceptance of Ayurveda is on the rise, dangerous claims to miracles can derail the work of many institutions that follow classical texts and conduct rigorous clinical trials before launching new formulations. “At Kottakkal, we manufacture very few OTC drugs. Over 85 per cent of our medicines are classical formulations, although in recent years, we have been making them available in easy-to-consume forms,” Dr Varier says. AVS’ top sellers over the years have been Chyawanprash, followed by Dasamoolarishtam, a popular herbal tonic. While they have not launched Covid-specific medicines, sales of some formulations that have been reported to be effective in treating mild-to-moderate cases of Covid, including a few endorsed by the Ministry of AYUSH, have registered a 30 per cent growth. Dasamoolakaduthrayam Kashayam, a bronchodilator and an expectorant, Ayush Kwatha Churnam for improving immunity, Indukanta Gulika—a syrup for digestive disorders, and Vilwadi Gulika, an anti-toxin, are among the fastest sellers at AVS now. “While these medicines have been shown to be effective in managing mild cases of Covid, they are no substitute for vaccination or life-saving interventions. No educated Ayurveda practitioner is trying to compete with vaccines,” Dr Varier says.

Patanjali last year endorsed Coronil, a proprietary product, claiming a 100 per cent cure in seven days, only to be forced to backtrack and market it as a ‘Covid management’ medicine

In October 2020, the Ministry of AYUSH released recommendations to integrate “Ayurveda and Yoga interventions” into the national clinical management protocol for Covid-19, recommending at-home treatment of mild cases—including, according to the ministry, patients presenting with hypoxia—with a list of herbal formulations, including Ayush 64, a poly herbal tablet that has reportedly been found useful in the treatment of mild infections. While modern medicine has pointed to the lack of rigour in conducting clinical trials of these drugs, alternative practitioners themselves rue the ministry’s competitive approach.

“We are lifestyle physicians,” says Pradeep MK Nair, a naturopathy practitioner and researcher. “There are over 10,000 formally trained naturopaths practising in 16 states today. Our role is to reduce fear among people, to educate them about health and to empower lifestyles, not to compete with the Indian Medical Association.” While naturopaths have proposed alternative therapies for managing Covid, including Ozone therapy, and high doses of vitamin D, Siddha medicine has revived ancient formulations like the Brahmananda Bhairava tablet, and a concoction called Kabasura Kudineer which has been distributed by the Tamil Nadu government since April 2020 under the ‘Arogyam’ campaign launched by former Chief Minister Edappadi K Palaniswami. The state-run Tamil Nadu Medicinal Plant Farms and Herbal Medicine Corporation Limited (TAMPCOL) produces over 15,000 kg of Kabasura Kudineer in a month, but the government has made it clear that “the concoction is not medicine for treating Covid-19 but generally meant for boosting immunity”. “It is one of our defences against pathogens,” says S Ganesh, director, Directorate of Indian Medicine and Homoeopathy in Tamil Nadu. Siddha hospitals and Covid centres in the state have “cleared” over 25,000 patients during the two waves, he says. “We only take mild and moderate cases with SpO2 levels above 84. In addition to traditional medicine, we have provided oxygen and advised patients to get vaccinated.”

Bonigi Anandaiah has been making and distributing a ‘cure’ for Covid-19 since mid-May. The state government took note and promptly endorsed the medicine, despite the fact that it was yet to be certified as safe and effective by the Ministry of AYUSH

While advertisements for Unani remedies normally targeted piles and sexual dysfunction, one of the most sought-after remedies today is a compound called Arq-e-Ajeeb. “In Unani, epidemic diseases or Amraz-e-Waba are caused due to ‘turbid’ and ‘moistened air’. Arq-e-Ajeeb is a simple liquid mixture of camphor, pudina and ajwain extracts, and when added to water and steam-inhaled, can provide relief from respiratory distress,” says Mohammad Anzar Alam, a Unani researcher from Bihar. “It is a vasodilator, and is also reported for antiseptic activity; what it is not is a substitute for antiviral drugs and oxygen. As physicians, we feel a duty to mitigate the suffering caused by the pandemic; we know our strengths and there is no need for the condescension that the IMA has been directing at us.”

Over the years, a few alternative remedies, including unlicensed cancer cures and a ‘fish medicine’ for asthma, have been challenged in Indian courts. The latter is an annual mass treatment ritual that continues to be practised by Hyderabad’s Bathini Goud family, which claims a saint gave the formula to their ancestor Veeranna Goud in 1845, forbidding them from revealing the contents. The herbal medicine is placed in the mouth of a murrel fish and the patient is made to swallow the live fish. Meanwhile, in an India where politicians can endorse cow dung and urine as cure-alls while themselves seeking modern medical interventions, the Government has been funding molecular research on homoeopathic medicines to treat cancer. “The first epidemic of the post-truth era is fraught with avoidable dangers,” says Dr T Kumar, a nephrologist from Pune who disapproves of the AYUSH protocol for Covid-19 management. “I have come across several cases where the patient’s kidney function had deteriorated from self-medicating with herbal concoctions. The fact that many of these medicines are available over the counter and not necessarily side effect-free as claimed by AYUSH, should be ringing alarm bells.” The long, raucous discussion on the role and the regulation of alternative medicine has only begun.