There is a sense of “nativity”, which means being culturally grounded 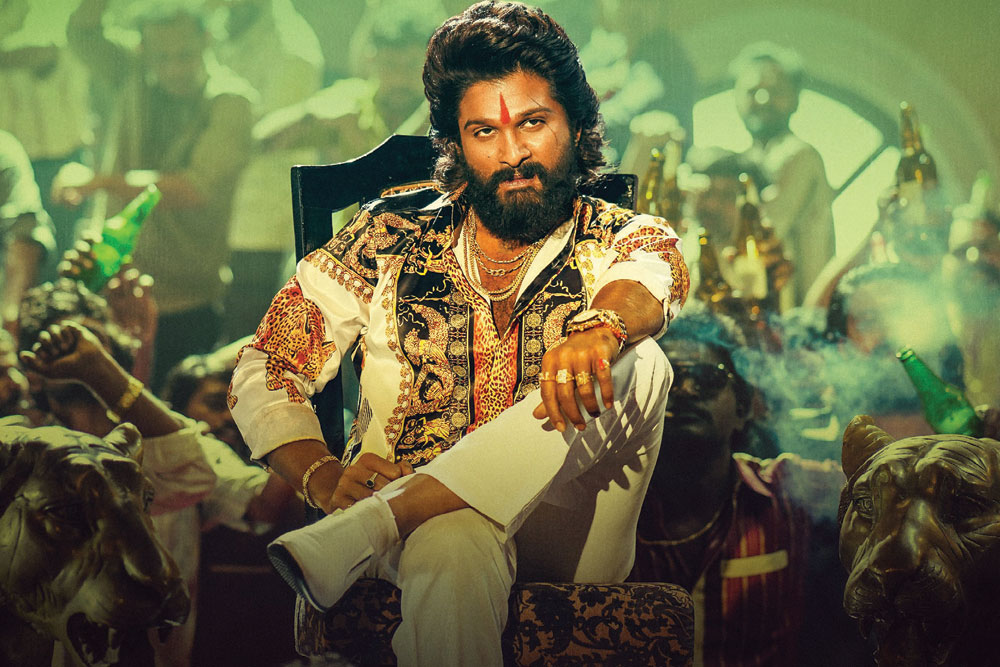 
“WHEN YOU TIE your lungi above your thighs, my breath stops / When you open the top two buttons and show your chest, my heart overflows like a milk pot.” Risqué lyrics, yes, but sung by the heroine for a change while serenading the hero.

In Pushpa: The Rise (2021), such twists of the cliché are common. A mobster sees Pushpa (played by Allu Arjun), a young wannabe smuggler, seated comfortably on a chair eating a bun and drinking his tea as he passes by. It’s not proper to sit cross-legged like this when his boss passes by, points out an underling to him. Instead of being reprimanded, Pushpa replies: “This leg is mine, and this leg is also mine. And I am keeping my leg on my leg. Did I put my leg on the boss, or what?”

Why would a Telugu movie about red sandalwood smugglers in Rayalaseema in Andhra Pradesh win plaudits across India and become one of this year’s biggest hits, grossing `81 crore at the domestic box office since its release on December 17th? It has been surpassed only by 83, which has made over `100 crore at the box office. There are several reasons, not in the least is the open secret: Telugu cinema has discovered the panache needed to draw audiences to theatres at a time of Covid-induced fear and streaming-induced laziness. With its combination of big action, smart choreography and rooted storylines, topped by actors who usually come from beloved dynasties, they are able to fill the gaping hole left by a confused Bollywood that can’t decide whether to go mass or niche.

Filmmaker R Balki, a great fan of Pushpa, says its filmmaking has panache and delivers what it promises to a film crazy audience: entertainment. “They are able to update clichés and create magical mass potboilers,” he says. And it’s not just SS Rajamouli, though his Baahubali diptych is a big part of the revival of Telugu cinema. “It’s the little things they get right,” he says.

They have also developed a culture of film viewing over the years. As Raj Nidimoru and Krishna DK, both IT entrepreneurs from Andhra Pradesh via the US, and now one of Bollywood’s smartest creators, say, everyone in Andhra Pradesh believes he can make a movie. Their 2021 production, Telugu movie Cinema Bandi, embodies this. Two men chance upon a movie camera in an autorickshaw and decide to make a movie, because, well, anyone can.

Audiences are deeply invested in their heroes and have been for generations in what film scholar SV Srinivas has described as a feudal connection. NT Rama Rao Jr. is the grandson of NT Rama Rao and nephew of Balakrishna; Mahesh Babu is the son of superstar Krishna, film star, studio owner and former Congress Member of Parliament; Prabhas is the nephew of Krishnam Raju, film star and former BJP minister at the Centre; Ram Charan is the son of Chiranjeevi; Rana Daggubati is the son of film producer D Suresh Babu and grandson of D Ramanaidu, and his cousin Naga Chaitanya is the son of actor Nagarjuna. This is not even the complete list of the film, business, and political families which have also been connected through marriage and preside over the industry.

Jr NTR films repeatedly demonstrate the extent to which distinguished lineage has become a source of stardom. He emerged as a major star when he was barely 20 and his growing popularity has resulted in the suffix of Senior being used to refer to the original owner of the name. He has featured in some of the most expensive productions in recent years—the latest being Rajamouli’s RRR—and film scholar SV Srinivas says he is now finding it impossible to move out of what film critics call the imagi chatram (literally, the image’s umbrella, but obviously referring to the shadow or bind of the screen image the star has been associated with). The image’s shadow clearly affects other stars, too.


Telugu filmmakers and audiences have not been swallowed up in a kind of faux cosmopolitanism as yet, and are as comfortable riding a motorbike in their lungis as they are wearing slippers with their jeans—no branded gym shoes or clothes for them

Equally, it benefits them, with a sharing of the devoted fanbase, which is then educated into a more sophisticated kind of storytelling by auteurs like Rajamouli as well as other directors such as Nag Ashwin and Sekhar Kammula. Many star families have also invested in businesses, including the film business. Examples abound, such as star Vijay Devarakonda’s investment in the multiplex theatre AVD Cinemas at Mahbubnagar, Telangana, or Daggubati’s investment in one of India’s leading comic book companies, Amar Chitra Katha, one of his several media interests.

Telugu stars have also been helped tremendously by television re-runs of Hindi dubbed versions of Telugu films shown on satellite television across India. M Rajshekhar, who has studied this for over 33 months for his book Despite the State: Why India Lets lts People Down and How They Cope, says, the Telugu film heroes resonate with young men in the small, rundown towns of Bihar, Gujarat and Odisha. “Their experience of education will be broken down school buildings and overcrowded classrooms. Their experience of life is about them being pushed into work at too young an age,” he says. They relate more with characters and narrative arcs of films from the south. “One instance I was given: a film with Jr NTR where a son wants to meet his father’s expectations. Bollywood doesn’t match up. It’s too unfamiliar,” he adds. Unlike Pushpa, where the outsider hero, with no surname, rises from a coolie to a partner to a gangster boss, based entirely on his brains and brawn, outwitting his rivals at every point. Yet, he retains a sense of goofiness, always battling his name (“I am not a flower, I am fire.”) and his innate bumbling in love. The choreography is cheeky (Allu Arjun will execute a dance step and his sandal will slip out) and the action is intricately choreographed with all manner of weapons, ranging from wooden logs to scythes to guns.

There is a sense of “nativity”, which means being culturally grounded. The young male heroes of Telugu cinema come across as working class, ranging from a Zumba instructor like Naga Chaitanya in Love Story (2021) to a delivery boy in Mathu Vadalara (2019). These connect to the NRI globally as well, who retains his sense of nostalgia with his rural-urban background. Pushpa, for instance, starts with the use of red sandalwood in the violins gifted at traditional weddings in Japan, which immediately makes the local international. Telugu filmmakers and audiences have not been swallowed up in a kind of faux cosmopolitanism as yet, and are as comfortable riding a motorbike in their lungis as they are wearing slippers with their jeans—no branded gym shoes or clothes for them. As Pushpa tells his antagonist Bhanwar Singh Shekhawat, played by the gifted Fahadh Faasil, “Brand is not in the clothes you wear, but in the way you live.”

Eventually, it is about characterisation, effective storytelling and the universality of emotions, says film scholar Janardhan Juvvigunta. And that, in the country’s second-largest film industry, is spot on.