The Meaning of Lakhimpur Kheri

Why the farmers’ agitation is turning more volatile 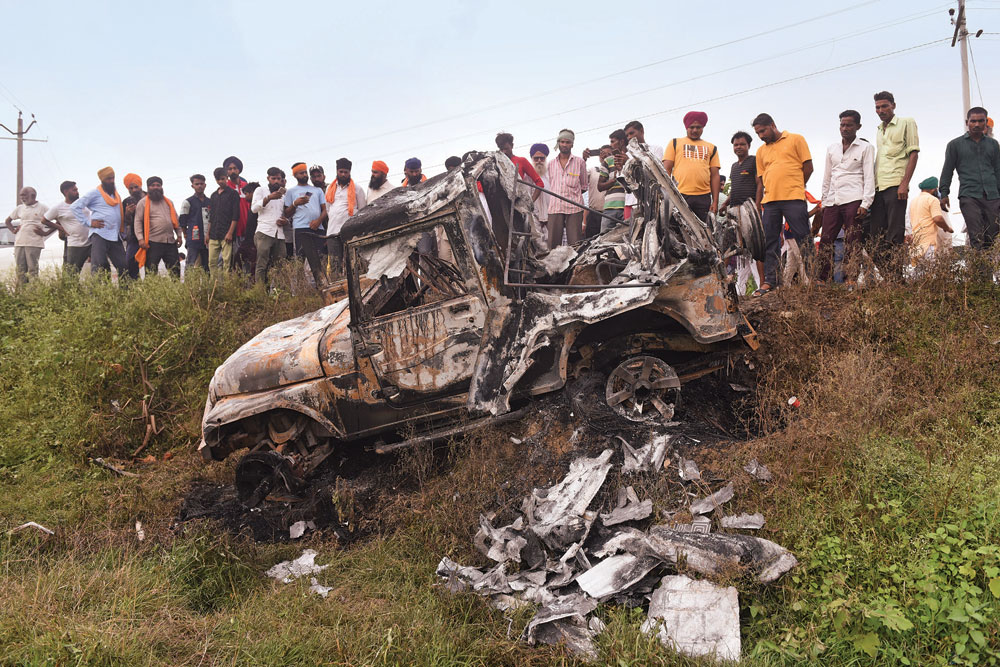 
IN THE DAYS after the death of eight people in Lakhimpur Kheri district of Uttar Pradesh (UP), political parties indulged in a tug-of-war seldom seen in India except during an electoral season. On October 3rd, four farmers were allegedly mowed down by the cavalcade of the Union Minister of State (MoS) for Home Affairs, Ajay Kumar Mishra. Four other individuals, including three Bharatiya Janata Party (BJP) workers, were lynched to death by the irate mob. A local journalist died as well.

Alarmingly, there are reports that Khalistani elements were present during the protest against the visit of UP Deputy Chief Minister Keshav Prasad Maurya that led to the chain of events culminating in the death of four farmers and the lynching of BJP workers.

In no time, a political firestorm erupted. As is typical in such situations, a section of the affected people and political parties demanded the immediate resignation of the minister and the arrest of his son who was allegedly driving one of the vehicles in the convoy. The minister and his son denied their presence at the spot. The situation was so volatile that the district administration curbed the entry and assembly of people in the district. Then began the drama of the state government allegedly preventing the entry of politicians to the district. Congress leader Priyanka Gandhi was detained on her way to Lakhimpur Kheri and held at Sitapur. Chhattisgarh Chief Minister Bhupesh Baghel sat on a dharna at Lucknow airport on October 5th when he was not allowed to exit the airport. This political drama began to cool down on October 6th when all leaders were allowed to proceed to Lakhimpur Kheri.

What helped in controlling the situation was the quick agreement by the state government to practically all the demands made by the protesters. Compensation for the kin of those who died, jobs for them too, a judicial inquiry, and an FIR. The police clarified quickly that the son of the minister, who has been named in the FIR, will be questioned.

The opposition, in contrast, had a different calculation. There are elections in Punjab, UP and Uttarakhand next year. The most noise on the issue came from parties locked in a bitter political contest with BJP in these states. It is interesting to note that Akhilesh Yadav, the man expected to present a challenge to Yogi Adityanath in UP, was more restrained in his approach. He is expected to visit Lakhimpur Kheri on October 7th, a day after the visit of Rahul and Priyanka Gandhi along with Punjab Chief Minister Charanjit Singh Channi and Baghel.

So far, the exact sequence of events is not known. Different versions based on different video clips have swirled around on social media since October 3rd. But this has not prevented political polarisation even in death. The three BJP workers who were lynched did not receive high-profile visitors nor did they get even a fraction of the attention devoted to the agitating farmers.


The politics of aiding the government and abetting extremist sentiments can turn the protest into something sinister. There were allegations that Pro-Khalistan slogans were raised at the site of the incident in Lakhimpur Kheri

It has been 10 months since the farmers’ agitation began in Punjab, a state that continues to be the locus of agitation and anti-farm laws politics. But since then, other factors have been stitched to the agitation to increase its shelf life. In Haryana, where there was very little opposition to the farm reform laws, the opposition has quietly stoked caste protests against the Manohar Lal Khattar government. In UP, where farmers’ politics was effectively moribund for more than two decades, the reaction has been opportunistic. In none of the three states have the benefits that go to farmers, such as subsidised inputs and assured marketing of crops, been reduced since three farm reform ordinances were passed last June.

This has had a curious effect on the agitation. For one, it has limited its geographic spread to those areas where farmers have availed these expensive benefits for decades. There is no sign that the agitation has spread to other major agricultural states like Madhya Pradesh, Bihar or even the region outside western UP. The traction for the agitation, even after political parties in the opposition provided support, was inconsequential outside a very limited part of north India. For another, the long duration of the protest without any results has made it more volatile.

It is this volatility, a product of anti-national elements trying to use the agitation and the opposition’s backing, that is now a major cause for concern. On October 6th, Rakesh Tikait was asked a question at a press briefing about the presence of a man wearing a T-shirt with an image of Khalistani terrorist Jarnail Singh Bhindranwale. He responded by saying, “The government considers him a terrorist but people think he is a sant (saint).” It is this dubious politics of playing both sides—aiding the government at one point and abetting extremist sentiments at another—that has the potential to turn the protest into something sinister. There were allegations that slogans in favour of Khalistan were raised at the site of the incident in Lakhimpur Kheri on October 3rd. The Inspector General of Police for the Lucknow Range, Lakshmi Singh, told journalists that this and other issues will be the subject of the probe ordered by the state government.

What transpired in Lakhimpur Kheri would in normal circumstances be limited to that district, or at the most the adjoining areas in UP. But these are hardly normal circumstances. The district has a large population of Sikhs who were settled there over time after 1947. In 2017, there were intelligence reports about the presence of Khalistani elements in the area. Above all, Sikh farmers there have the sympathy of their co-religionists in Punjab who see them as victims of government atrocity. In poll-bound Punjab, the issue has turned into a political opportunity for Congress that until recently found it difficult to manage the turbulence in the party. Now, all of a sudden, the party’s internal squabbles have been set aside almost overnight and its leaders like Navjot Singh Sidhu have engaged in protests in Chandigarh on this matter. Sidhu in a tweet on October 5th said: “If, by tomorrow, the Union Minister’s son behind the brutal murder of Farmers is not arrested, and our leader Priyanka Gandhi being unlawfully arrested, fighting for farmers is not released, the Punjab Congress will march towards Lakhimpur Kheri!”

In the event, Sidhu’s march did not materialise as Priyanka Gandhi was released from detention in Sitapur and allowed to proceed to Lakhimpur Kheri. So were leaders of other opposition parties. In the days ahead, opposition parties will try to gain the maximum political mileage they can from the issue. That is part and parcel of India’s political culture. It will have little bearing on the farmers’ agitation except to whet the political appetites of ambitious farmer leaders who have otherwise fared poorly in electoral politics. That, too, is an acceptable feature of democracy in India. The troubling part lies elsewhere. In the course of the agitation, farmers’ organisations, their leaders and the activists who advised farmers on the path to agitation, now find themselves in a cul-de-sac. Political parties, as can be expected, are only interested in electoral outcomes. The Supreme Court now openly questions the legitimacy of holding protests and challenging the three farm laws at the same time. The negotiations with the Union Government went nowhere because the Government was served an ultimatum to repeal the laws, a step that no government can take as it undermines Parliament. The result is a mix of restlessness over a farming issue now in danger of being converted into identity politics. It is a fraught situation that ought to be handled firmly and quickly.