The Game of a Lifetime

Will the Olympics be a global superspreader of new variants or show the world a path away from the fear of Covid? 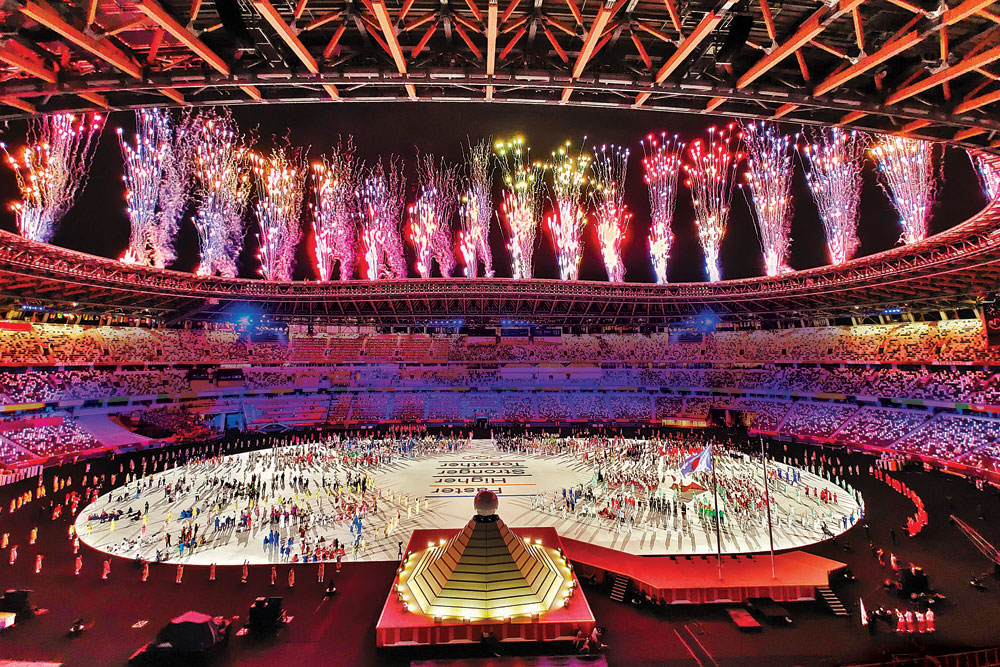 Fireworks at the opening ceremony of the Tokyo Olympics, July 23 (Photo: Getty Images)


IN THE FULLNESS of time, when the ironies Covid imposed on humanity will be evaluated, the manner in which the Olympic Games were held will figure prominently. Consider that this was an event that was slated a year ago and was postponed because of the pandemic. At that point of time, the number of active cases in all of Japan was less than 1,000; now it is close to 3,000 a day in just Tokyo alone, where the event is being held. Whatever the rationale for not holding the event then, it has multiplied manifold by now. Yet, it was given the nod in the wake of a second wave that has been far more debilitating. That is just one peculiarity. Among the countries taking part, some have had great success in vaccination while others have had almost none. It is an egalitarian event, but the starkness of the class differences between nations has become amplified by the virus. The rules of the Olympic Committee to manage the pandemic have come in for criticism. There is a lot of social distancing and mask wearing, for those who are helping to run the event on the ground to the plexiglass that separates the dining places of athletes. But on the ground itself, when the actual sport is on, these are impossibilities. Take wrestling, where two bodies are going to be entwined. If one of them should be an asymptomatic carrier, then there is really no way to mitigate the chances of transmission.

That it was decided to hold the event has a lot to do with commerce. The Olympics is not something prepared overnight. Countries spend billions sprucing up infrastructure years in advance. Also, for a nation’s collective memory, the holding of the Games is a matter of pride. In the consciousness of the species, it is a marker of how much we treasure the endurance and ability of the human body, and the spirit of good competition. To cancel the event altogether becomes very difficult. Those who are asking for it are pundits who have no skin in the game in the losses incurred. No commentator or scientist loses income by asking for an absolute freeze on society. No government servant or leader forfeits his chair in trying to execute such demands. That has been a hallmark of Covid—people who are the most affected in terms of livelihoods lost are the ones who have the minimum say about a lockdown. Those who are secure are enthusiastic about not risking the disease, and they make policy. Only when a government sees the enormous direct impact that they would incur, do they take in both risk and reward (or loss). It is what Japan is doing. To postpone it by a year is about what met loss limit. They did not even insist on compulsory vaccinations for athletes to participate.

There were, however, enough other precautions to make it perhaps the most unusual Olympics in history. For one, there are almost no spectators. Those who had already got a ticket were told sorry. The whole of Tokyo has been placed under a Covid emergency. As an ESPN report early July said: “Fans from abroad were banned months ago, and the new measures announced by Japanese Prime Minister Yoshihide Suga will mean venues around Tokyo—indoor and outdoor—will not have any fans at all…The main focus of the emergency is a request for bars, restaurants and karaoke parlors serving alcohol to close. A ban on serving alcohol is a key step to tone down Olympic-related festivities and keep people from drinking and partying. Tokyo residents are expected to face stay-at-home requests and watch the games on TV from home. ‘How to stop people enjoying the Olympics from going out for drinks is a main issue,’ health
minister Norihisa Tamura said.”

That the central motive for the organiser of an Olympics is to make the public enjoy as little as possible is yet another novelty this time. This is all in the backdrop of a contrast between Covid and what the Olympics represents. It is the ultimate arena of the possibilities of the human body. Every Olympics is when the best sportsmen in the world try to break the limits that nature has imposed on the body. It is a celebration of endurance and strength, and what remains—the last 5 per cent driven by the mind—when the body has expended itself in its entirety. These are the fittest men in the world under siege by a virus that mostly affects the unhealthy. By July 26th, 19 athletes and team officials had been tested positive. Even though that was only 0.02 per cent of the numbers that had been tested, the amplification of the fear becomes greater than the disease itself.


The bigger problem the event is facing is from public opinion. Faced with the possibility of hospitals running out of beds because of the wave, the Japanese are in no mood to entertain the world. A Reuters report of July 27th said: “The rise in cases threatens to further erode support for Prime Minister Yoshihide Suga, whose ratings have slid to their lowest level since he took office last September, in large part because of his haphazard handling of the pandemic. It also spells trouble for the Olympics, as many Japanese fear the influx of athletes and officials for the event could add to the surge. About 31% in a survey by the Nikkei daily on Monday said the Games should be cancelled or postponed again.” This is then the situation—foreigners are not allowed to watch the Games, and the locals wouldn’t even if they could. A large percentage of them would even now favour cancelling it midway.

Criticisms, meanwhile, come from all quarters. From how the safety measures don’t go far enough to, as one Wired article headlined, that it could even be a “super-evolutionary event” for Covid because the entire world’s people are coming down to participate and they will all return home, including infected ones. It said: “A giant gathering with people from many different populations, almost certainly carrying different versions of the virus, is exactly the kind of place that makes superspreader events and the exchange of new variants more possible. It might—emphasis on might—even make possible the development and spread of new, worse variants… All those people with differing immune statuses and different exposures to different strains of the virus could create a terrifying genetic parody of Olympism’s international cooperation: a free and open exchange of viral ideas on how to be more infectious, maybe even more deadly or more vaccine-evasive. And then it’d travel back to everyone’s home country under the cover of asymptomatic spread.”

But there is the flip side too. Despite the enormous congregation—around 15,000 athletes and support staff from over 200 countries—and Japan being at the centre of a new wave, if the event goes on without any serious cases or deaths, then it is a good argument for a return to normalcy. To see Covid in perspective as a disease not very removed from other endemic diseases and therefore not needing extraordinary lockdowns. Countries like Singapore have already decided to not treat Covid any different. The longer the pandemic drags on, more countries are going to follow suit.
The success of the Olympics without any significant damage would be a definitive signal that sporting events can be held without constant double thinking. Or that even continuing an event despite infections happening in the middle of it is not inappropriate. The Indian Premier League, for example, recently was postponed midway because of Covid infections. Future organisers might not be so fearful after the Olympics.

A successful Olympics could also take the sheen off the political correctness of the idea that no normalcy should be attempted until the virus is completely vanquished. It will show that cohabiting with the virus is possible. Like competition in Olympics, the body is only half the arena against Covid. The pandemic is only over when the mind is free from its fear. That might be the biggest victory that these Olympics can offer.