The End of an Agitation

Something that has not gone unnoticed in the politically aware community 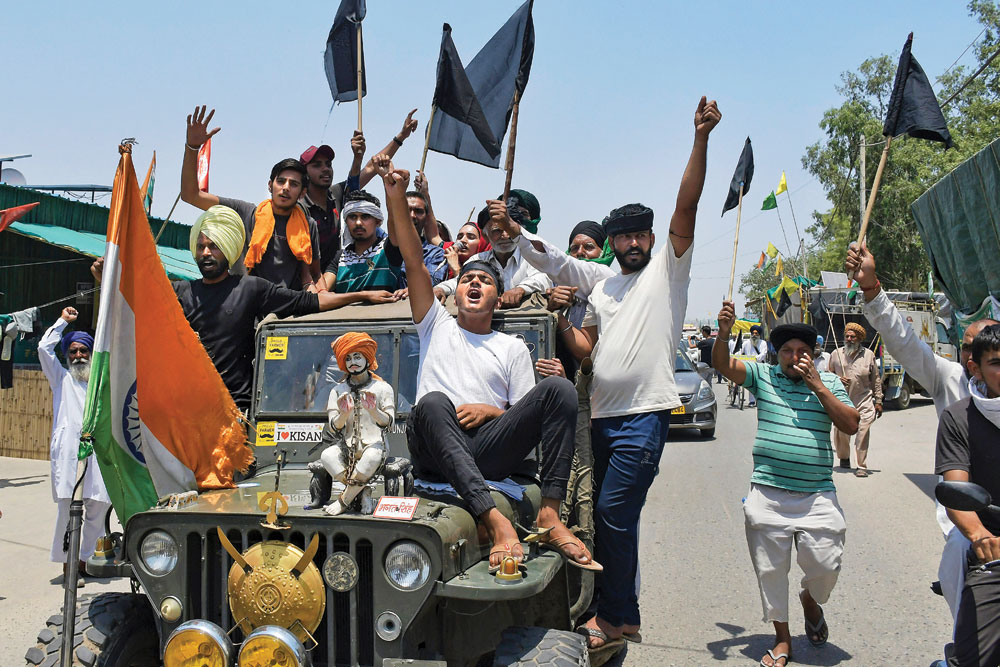 Farmers protest on the outskirts of Delhi, May 26 (Photo: AP)


WHAT A WORLD of difference six months can make. Back in late November as swarms of tractors marched from Punjab to the border of Delhi, it appeared to be nothing less than an invasion of the wronged. The commentariat was behind the agitators like a phalanx. Stories about the farmers’ resolve on display at Singhu—the village on the outskirts of Delhi where they had camped—were magnified manifold. It appeared the minnows were winning against an unjust Goliath.

On May 26th, the black flags at Singhu sent a different, mocking message to the organisers. The planned “black flag” march, with farmers from across north India congregating at the gates of the national capital, fizzled out badly. Even in Punjab, the locus of the agitation, the intensity of the campaign had muted. As reported in The Indian Express, Jagmohan Singh Patiala, one of the top organisers of the agitation, said “We just wanted to tell the Government that the general sentiment of the masses against the three farm laws remains unchanged.” Patiala, who runs his own rump faction of the Bharatiya Kisan Union (BKU), was one of the first agitators and began organising farmers way back in June last year, soon after the three farm ordinances were promulgated. What he said on May 26th were just brave words.

It is not hard to understand what has transpired in the last six months. It is clear that fatigue has set in. This was obvious even in February when the crowds had begun thinning. But that did not deter leaders of the 30-odd factions of BKU who were vying for a political role: none could be seen backing out even as farmers, who expended considerable resources to reach Delhi, were stretched in every way. Ordinary farmers, who were anxious about the impact of the three farm reform laws, had very different concerns from their leaders. These leaders, who lost political space a long time ago, saw an opening in the agitation. There was clearly a gap between the leaders and the followers that has only widened over six months.

At the same time, the Government has not been idle during this time. The endless rounds of meetings with farmers, where their leaders showed they were not seeking a solution, represented the Government’s effort to reach some common ground. But the quest for a greater political role meant that any compromise short of a total backdown by the Government would be unacceptable to these so-called leaders. It was in those dreary days that the Government decided to adopt a different, patient strategy that appealed to the rational self-interest of farmers instead of fruitless negotiations with their leaders.

The elements of that strategy included a direct transfer of benefits like Minimum Support Price (MSP) due to farmers instead of routing them through grain commission agents. The demand for removing this parasitical layer of middlemen was the original motivation for farmers’ movements in Punjab and Haryana many decades ago. It was conveniently bypassed during the current agitation as the farm reform laws threatened to shift agriculture to a different, more efficient equilibrium in Punjab and Haryana. This was a threat to an entire establishment—state governments and middlemen—who lived off the money injected by the Union Government even as it was an opportunity for the “farm leaders”. Ultimately, when the direct transfer of benefits was begun from the rabi marketing season this year, it went down well with ordinary farmers who received their dues without the hassle of going to the local mandis and commission agents repeatedly.

If that was a technological fix to a longstanding problem, the Government took care of another set of far more important issues. The continuous increase in MSPs, the release of money under the PM-KISAN scheme and the very recent increase in the subsidy on diammonium phosphate (DAP)—a complex fertiliser—from Rs 500 to Rs 1,200 per bag, benefit farmers, something that has not gone unnoticed in the politically aware community.

The thinning crowds at Singhu are in no small measure due to this change in strategy by the Government and the farm leaders’ own poor understanding of tactics. The big question now is: What next? Will these measures help the Narendra Modi Government politically? Will the residuum of the so-called movement peter out in the next few months?

Here, the picture is mixed. There is considerable ferment on the ground in Haryana where the Manohar Lal Khattar government continues to be at the receiving end of farmers’ anger. But this is mainly due to Jat ire at having to see a non-Jat as chief minister. The farmers’ “issues” were simply grafted on the caste issue. The timing of the protests in Haryana—which gathered steam long after the original agitation at Singhu—hints at this. In Punjab, BJP is in any case on a weak wicket. It spent too much time as a junior partner to the Shiromani Akali Dal (SAD) to sink roots in rural areas. In urban areas, too, the political calculus does not favour it.

The clearest results, in a positive sense, may be witnessed in Uttar Pradesh, the biggest political prize on the horizon. There, especially in western UP, kisan leader Rakesh Tikait has tried very hard to regain the nuisance value that once belonged to his father, the late Mahendra Singh Tikait. But the measures undertaken by the Government may end up diluting farmers’ fury even if it is unlikely to fully stanch it.

In recent weeks, the opposition has sought to latch on to the farmers’ agitation as an opening against the Government—the letter written by these leaders to the prime minister demanding an immediate withdrawal of the three farm laws, among other things. If one looks at the composition and direction of this opposition—“federal” in nature with an extreme bias towards re-distribution—it is reminiscent of those “holding hands” events on political stages that originated in the 1990s and persisted to the first decade of this century. They are unlikely to work now. Even someone like Yogendra Yadav noted as much when he recently wrote: “In any case, the sight of all opposition leaders holding hands together may not enthuse voters; it might only reinforce the impression of one man against a gang.” The reality is that such a formation is based on political ideas of the 1990s, farmer politics of the 1980s and shortage economics of the 1970s.

The challenge for the Modi Government is to shift a ruinous economic equilibrium that requires some heavy political lifting. The path out of it requires immediate and huge downpayments. The full costs of elevated payments on account of higher fertiliser subsidies, increased outgo due to rising MSPs and PM-KISAN payments, will only be known with a lag. Agriculture in Punjab and Haryana turned unproductive when the Government ended up with much higher economic costs of foodgrains that were in multiples of MSP. The interest burden, carrying costs, transportation and other expenses alone make it more in the nature of costs that have to be incurred to keep a restive population quiet. As such, they are better accounted for along with internal security costs of the Ministry of Home Affairs instead of normal economic calculations. But if they help in reforming agriculture and allow farmers elsewhere in the country to become prosperous, they will be worth the trouble. As for farmers in Punjab, they now resemble frontier tribesmen who have to be paid regularly for not going on rampage elsewhere. These are harsh words but they have a core of truth in them.