Why is the number of suicides among young Indian women rising? 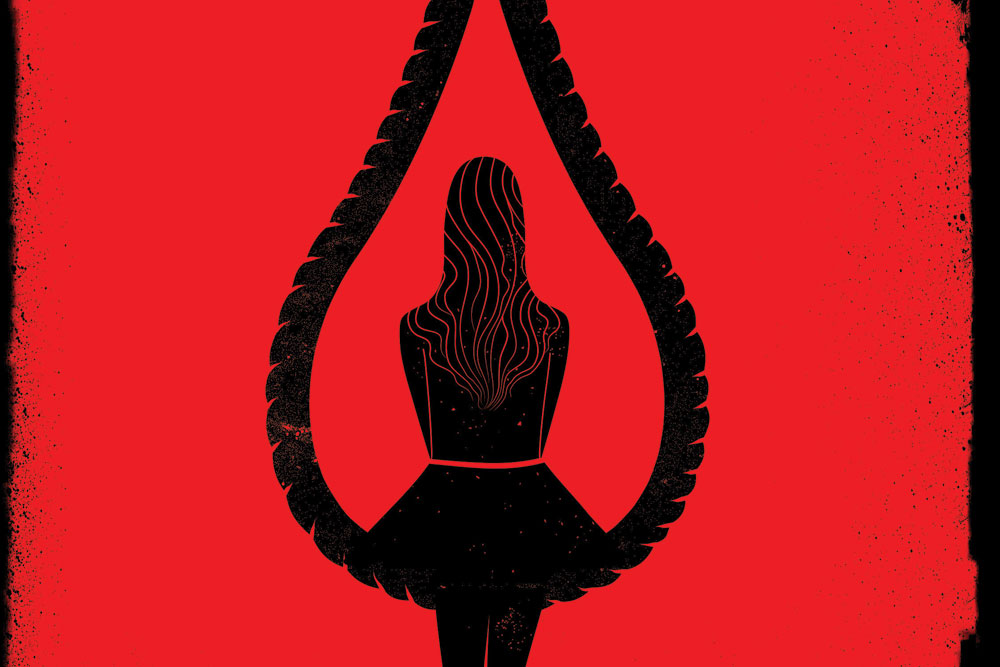 
IT has been over six months, but her brother still chokes when talking about her. His 24-year-old sister had barely been married a year when she died by suicide. “She was the light of our home. She was so excited when she found the right match. My parents introduced her to a lot of suitors, but it was she who always took the final decision. He [brother-in-law] looked good, spoke well and charmed my sister from the first meeting,” he tells Open. Dowry was demanded upfront but more in the form of ‘assets’ in order to “help the young couple start a new life.” Cash, jewellery, furniture—the girl’s family happily complied. After all, “it is just how things are.” Only the demands never stopped. And then the violence began. Her pleas to come home were handled delicately by the parents and sibling. “It’s not even been a year. He has promised he will stop. Try and make it work. We are with you.” But the reassurances were eventually not enough. “It’s not that we weren’t worried. Or that we didn’t support her. But we obviously failed her. I wish we had seen the signs. I wish we had never let her return to him after the first time he hit her,” the brother says. The family alleges she was killed by her husband and a case of dowry death has been registered against him.

In 2020, 22,372 housewives died by suicide in India. In 2018, this number was 22,937. Data analysis has shown that every year since the turn of the century, nearly 20,000 housewives have died by suicide in India. What is perhaps more shocking than the figure is that this may not even represent the correct number. A 2018 report by Lancet stated that India’s contribution to global suicide deaths among women increased from 25.3 per cent in 1990 to 36.6 per cent. For men, it went up from 18.7 per cent to 24.3 per cent. “The suicide death rate (SDR) in India is higher for men. But when we compare globally, the SDR for Indian women is really high,” says Dr Rakhi Dandona of Public Health Foundation. She was involved in the Global Burden of Diseases, Injuries and Risk Factors Study, 2016, the findings of which were published in Lancet.

The National Crime Records Bureau (NCRB)—which records the number of deaths by suicides in India—aims to identify the different causes that lead individuals to take this step. These range from family problems to suspected illicit relations, love affairs and marriage-related issues. But just what exactly do blanket terms like “family problems” and “marriage-related issues” mean?

“Suicide cannot be looked upon as a single-cause phenomenon. There is never any one issue, there is a progression of events, a multiplicity of factors that lead up to it. To attribute one single reason to it is akin to the fable of blind men trying to identify an elephant by its different parts. Don’t look for a single cause,” says Dr Soumitra Pathare, director, Centre for Mental Health Law and Policy, who also works actively on suicide prevention. For instance, domestic violence is not included as an independent ‘cause’ in the NCRB database.

Over the years, there have been innumerable attempts to explain the consistently high number of women killing themselves in India, even as the world over the rates—for women—have come down. “We have theories about why this is happening, but we don’t have good research,” says Dandona when asked about the complex relation between suicide and gender in India. From early marriage to lack of financial freedom, forced marriage, postpartum issues, there is a multitude of reasons, and yet not a single trigger that pushes housewives to take this step.

When it comes to suicide data in India, there are a few facts that have been consistent over the years. One of these is that the more prosperous and educated southern states like Tamil Nadu, Kerala and Karnataka have consistently had a higher suicide rate. “Women in south India are more educated, but education is not protection. There is a conflict of empowerment,” says Dandona.

“With higher education, there are greater aspirations and a desire to seek out more opportunities. When women’s expectations come up against traditional social conventions and their expectations are unmet, there is a greater chance of disappointment,” says Dr Lakshmi Vijayakumar, founder of Sneha, a suicide prevention organisation based out of Chennai. 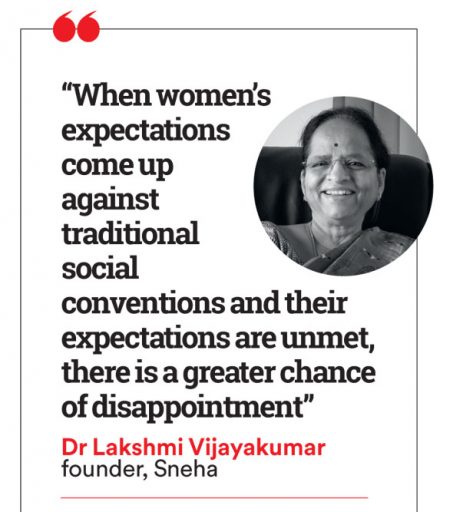 The 24-year-old who committed suicide after being allegedly tortured by her husband, ticked all the boxes in terms of being educated, computer literate and emancipated enough to choose her own partner, even though it was an arranged marriage. But despite coming from a seemingly loving familial setup, there was no conversation about leaving her abusive husband. Women are often advised to “bear with” domestic violence and abuse in the hope that it will eventually end. A divorced or separated daughter is still taboo in most parts of India.

The pandemic has only worsened the situation. In cases of domestic violence, women found themselves locked in with their abusers, a situation that would have added to their sense of helplessness.

It is a problem that has been acknowledged enough but attempts to either understand it or address it remains woefully inadequate. Policy focus on women in India is still firmly on issues like maternal health and family planning, says Dandona while acknowledging that suicide prevention must be multi-sectoral, involving different sections of government, from health to finance to legal recourse.

There are also lessons to be learnt from China—all factors considered—where female suicides have halved in over a decade. Largescale migration from urban to rural areas occurred, thereby giving women financial autonomy. The Chinese government also reduced access to means like pesticides. In fact, controlling access to pesticides does lead to a noticeable difference in suicide rates. In a 2013 study conducted by Dr Vijayakumar along with others, two centralised pesticide storage facilities were constructed in two villages chosen out of eight, through a lottery method, in a district in southern India. “Following the intervention, the differences between sites in changes in combined, completed and attempted suicide rates per 100,000 person-years were 295 for pesticide suicide and 339…for the suicide of all methods,” concluded the study.

“Some things that can be done to reduce women suicides are to get more women working. India had 20.3 per cent women in the labour force in 2019, unlike China which had 60.5 per cent, providing safety nets when they suffer domestic violence, assistance to legal help, therapy during important events in life when there is increased distress, extended maternity leave and back-to-work programmes,” says Nelson Vinod Moses, founder of Suicide Prevention India Foundation.

However, when it comes to death by suicide, housewives aren’t the only vulnerable group. Young adults in India are increasingly committing suicide, the numbers large enough to merit worries about a potential public health crisis. The age group 18-29 and 30-45 “were the most vulnerable groups resorting to suicide,” according to the NCRB report. The highest percentage increase in the latest report was, in fact, observed among students. “Death by suicide went up by 10 per cent in 2020. The spike can be attributed to the pandemic, but the loss of human capital is so distressing,” says Dr Vijayakumar. 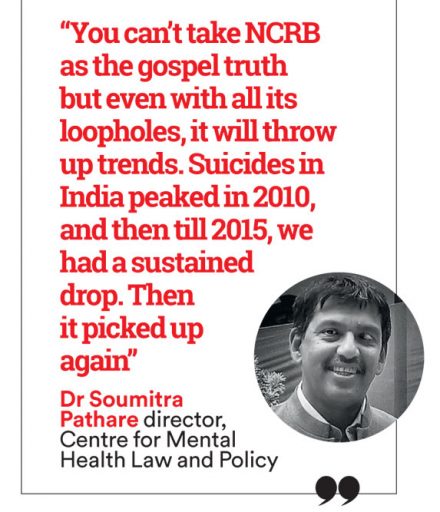 One of the biggest issues in India concerning suicide is data collection. The only point of reference is NCRB, which in turn relies on police reports, and these are not always foolproof. “You can’t take NCRB as the gospel truth but even with all its loopholes, it will throw up trends. Suicides in India peaked in 2010, and then till 2015, we had a sustained drop. Then it picked up again,” says Pathare. The spike seen in 2020 follows no pattern, though daily-wage labourers made up for the largest share, presumably due to the lockdown. “If we look at women, the biggest spike was in the under-18 and over-60 age groups. This flies in the face of the previous data,” says Pathare. The majority of deaths by suicide of Indian women is recorded in the 15-29 age group. It is difficult to identify trends, causality, multiple stressors if data remains inadequate. “In the absence of raw data from NCRB, we only have small, area, region-specific studies. Every age group, every region has different equations. For instance, in death by suicide amongst the under-18, girls outnumber boys. It is a very serious issue, and it is not even exam pressure as there were no exams in 2020. Suicide is a very complex issue, but the commentary around it is very simplistic,” rues Pathare.

The world over, mental health is seen to have a very strong correlation with suicide. According to a 2021 paper on psychological autopsy studies of suicide in Southeast Asia, “the presence of pre-existing psychiatric morbidity and stressful life events were the two most common risk factors noted across settings.” “But we have to realise that suicide prevention is not the domain of mental health professionals alone,” says Dr Vikas Menon, one of the authors of the paper. “In our country, there is already an 85 per cent gap for treatment of mental disorders. We need to build awareness, foster programmes that change mindsets, schools should work on suicide prevention programmes so that awareness about mental health is inculcated from a young age. Teachers should be groomed to watch out for red flags among students. Right now, we have sporadic efforts that range from state-specific pesticide sale laws to interventions, but this is a systemic issue that needs to be addressed at various levels,” says Menon.

There are structural gaps that need to be addressed if we are serious about bringing the suicide rate down. These range from a social security system to the implementation of laws meant for the protection of women. A 2019 study looked at the impact of a cash transfer programme started in Brazil in 2004 to attenuate the effects of poverty on Brazilians and the impact it had on reducing suicide rates. “If there is a social security system which a farmer can rely on when his crop fails, then he wouldn’t take such a step,” says Dandona.

What India has right now is a piecemeal solution approach, from helplines to banning the sale of poisons—in this case, pesticides—to spot counselling, as in the case of exam results. All these are secondary interventions. India doesn’t have a national suicide prevention strategy although one has been in the works for some years now. This can help with what experts call a scaffolding approach that helps at-risk people navigate tricky situations. “We need to have a public health agency in charge of data collection as is the case with Census and the National Family Health Survey. Data helps you create solutions,” says Pathare. There is also the Mental Healthcare Act, 2017, which promises mental healthcare to all. Its implementation is paramount. Interventions can be as basic as text messages that are an effective way to create awareness, decrease stigma and induce help-seeking behaviour.

“We need a large public engagement campaign to increase help-seeking. This must be Centrally driven, supported by state governments. Mental health and suicide should be treated as a public health crisis that needs immediate fixing,” says Moses.