Can Mallikarjun Kharge be more than a figurehead? 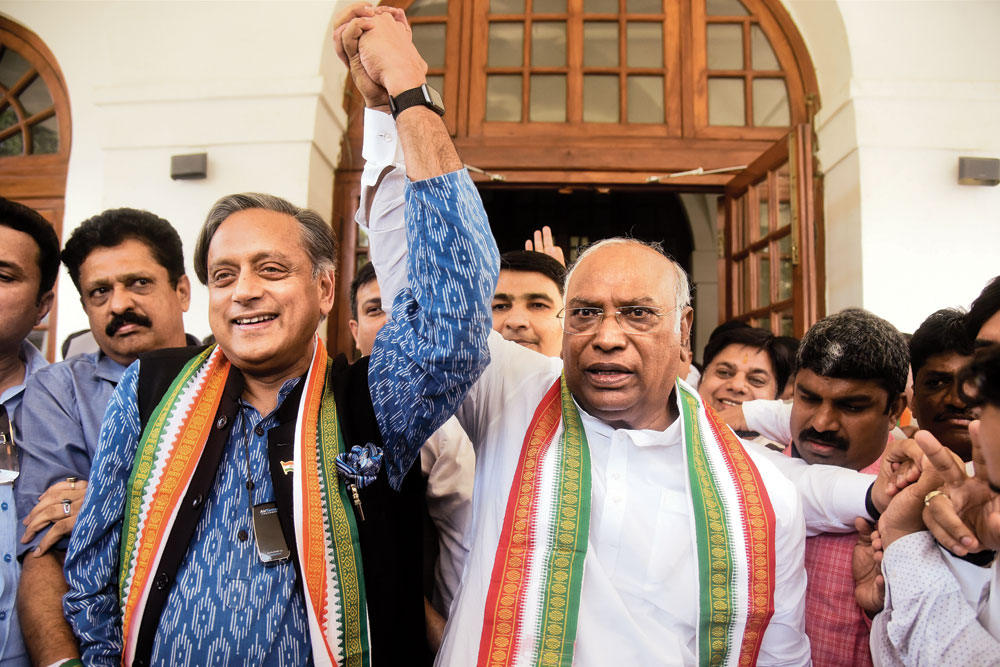 
THE RESULT OF THE ELECTION FOR THE Congress president’s post was not intended to be a surprise. Even as the counting of some 9,300-odd ballots began, party leaders confidently predicted that veteran Mallikarjun Kharge would get more than 90 per cent of the votes polled. There was little expectation that the challenger, Thiruvananthapuram MP Shashi Tharoor, would pose more than a token opposition given the virtual boycott he faced in the states during his campaign with just the odd Congress leader by his side. Congress President Sonia Gandhi’s claim that the Gandhis would be “neutral” did not extend beyond the rhetoric it was meant to be. In the end, Kharge garnered 84 per cent of the vote while Tharoor got 1,072 (11.4 per cent) votes. Tharoor’s tally was an improvement over Jitendra Prasada getting a paltry 94 of 7,700 votes polled against Sonia Gandhi in 2000, the last time there was an election for the Congress president.

Yet, this was the first time since the late Sitaram Kesri was unceremoniously ousted after a brief and tumultuous tenure to make way for Sonia in 1998 that a non-Gandhi has become party chief. Sonia has held the post continuously except when she stepped aside for son Rahul Gandhi in 2017, only to take up the job again after the 2019 General Election defeat. The circumstances behind the elevation of Kharge are also clear enough. It was not an altruistic bid to promote alternative leadership but Rahul’s steadfast refusal to formally assume party responsibilities and the mounting pressure from dissidents demanding an elected and accountable leader that led to the party poll being held. After Sonia was installed as “interim” president in 2019, Congress’ poll fortunes did not look up. While she was party president, decisions were increasingly taken by Rahul, who chose to act through a clutch of leaders close to him while growing increasingly distant from party seniors with whom he never enjoyed any real rapport. It is understood that Sonia’s appointments often required Rahul’s nod, limiting her interactions. The onset of the Covid pandemic worsened the situation and in August 2020, a group of 23 party leaders wrote to Sonia calling for organisational elections and a “full-time” party president. They made their dissatisfaction with Rahul’s style of functioning amply clear and essentially challenged the Gandhis’ leadership.


The “G23”, as they came to be called, comprised leaders like Ghulam Nabi Azad and Anand Sharma (both led Congress in Rajya Sabha), former Maharashtra Chief Minister Prithviraj Chavan, who had been considered a family loyalist, former Haryana Chief Minister Bhupinder Singh Hooda, former Union Minister Manish Tewari, well-known lawyer Kapil Sibal and others, including Tharoor. While the G23 letter was a jolt, it did not immediately move the party to action. The Gandhis hosted G23 leaders for lunch at 10 Janpath where each heard the other out. There were meetings of the Congress Working Committee (CWC) and a panel on organisational matters was set up which finally recommended an election schedule. The dissidents had also called for elections to the working committee which has been a nominated forum. The party conceded this demand in September when senior leader Madhusudan Mistry announced that 12 of the 23 members would be elected. There is an expectation that Kharge’s election as party president will be followed by a session of the All India Congress Committee (AICC) that will endorse his election but also elect CWC members. An election of CWC members was last held in 1997 at the Calcutta session of AICC and was a lively affair with candidates actively canvassing among delegates. While AICC is a curated body, there are factional loyalties and satraps can and do command votes. In the much-discussed AICC session held at Tirupati in 1992 after PV Narasimha Rao became prime minister, several of his rivals like Arjun Singh and Sharad Pawar were elected to CWC while supporters like Pranab Mukherjee and K Karunakaran had lost. Miffed at the results, Rao got the elected members to resign on grounds that Dalits and women were not represented. The idea, of course, was to enforce his authority after he had adroitly sidestepped calls that he relinquish the Congress president’s job. While the pool of AICC delegates is hardly as turbulent today, the results of elections to CWC cannot be fully anticipated. As the revolt of Congress MLAs in Rajasthan loyal to Chief Minster Ashok Gehlot showed, the high command’s writ is not what it used to be.

Kharge is sure to be more approachable than Rahul Gandhi. He will also be on better terms with the G23 as he will not be seen as an upstart. While he might proceed with organisational rejigs, the party’s political line is likely to be scripted elsewhere

The Gehlot saga was a revealing event in the run-up to Kharge’s candidacy. There were strong indications that the chief minister was the 10 Janpath choice, and one who would pass muster with the G23 as well given his long record in electoral politics. Yet, not so subtle attempts to prod him to resign as chief minister ahead of the polls, without any assurance that he would decide his successor, led to suspicions in the Gehlot camp that rival
Sachin Pilot would occupy the chief minister’s post. Gehlot would have none of it and Sonia was shocked when a meeting of party MLAs called to authorise her to take a call on the next chief minister was boycotted and instead 90-odd legislators gathered at the residence of Gehlot loyalist Shanti Dhariwal. Gehlot later regretted the defiance of his supporters but the message was clear enough: the days of the high command playing snakes and ladders with regional leaders was over, at least for now. The Gandhis then turned to Kharge who was seen as the safest option while the other choice, party general secretary Mukul Wasnik, was felt to be too junior. Wasnik is also a Dalit like Kharge and, at 63, not exactly a spring chicken. He was minister in the Narasimha Rao government in 1993. There remains a sneaking suspicion in Congress circles that anyone seen to be on the “younger” side will be given a miss for top jobs. A similar view prevailed when Jyotiraditya Scindia, now with the Bharatiya Janata Party (BJP), was denied the chief minister’s as well as the state party chief’s job during Congress’ brief tenure in Madhya Pradesh after it won the state elections in 2018.

THAROOR COMPLAINED THAT the voting process was compromised and his agent Salman Soz said a representation had been made to the party electoral authority. While refusing to spell out the details, Soz said he had expected some “resistance” to Tharoor given that the MP was a relative newcomer to the party. Later, Tharoor congratulated Kharge but some of the bitterness is likely to remain. As things turned out, Tharoor’s effort was a solo essay as the G23—itself not a very cohesive entity—did not back him. Some G23 members signed on Kharge’s nomination form and some like Tewari said they were supporting the Karnataka leader as the party needed a “safe pair of hands”. Tharoor is a popular figure on the lecture circuit and commands a social media following. He is also articulate in voicing opposition to BJP and backing ‘secular’ values in the Congress tradition. But his candidature was not likely to gather support in a carefully organised electoral college with Kharge being the ‘unofficial official’ candidate. Given his informal manner, Kharge is sure to be more approachable than Rahul Gandhi was to party cadres. He will also be on better terms with the G23 as he will not be seen as an upstart, a tag attached to some Rahul aides. And he will make the Congress office on Akbar Road a livelier and more purposeful place. The question is whether he will be more than a figurehead. While he might proceed with much-needed organisational rejigs, the party’s political line on major issues is likely to be scripted elsewhere. The attention the party is focusing on Rahul’s Bharat Jodo Yatra removes any doubt as to who the leader and the party’s prime ministerial candidate is. There is no evidence that the party has moved from the leadership’s assessment that its second defeat in 2019 was caused by Congress having to fight the “entire machinery of the Indian state” and a compromised media, judiciary and Election Commission—reasons mentioned in Rahul’s resignation letter of 2019.

Tharoor’s complaints of rigging, irrespective of their veracity, have soured what was to be a contest within the Congress family. Kharge will not have much time to settle in with elections to Himachal Pradesh, once a bastion of the party, round the corner. The unit is adrift under Pratibha Singh, widow of late Congress doyen Virbhadra Singh, with leaders like Anand Sharma quitting as chairman of the steering committee. Usually a swing state that alternates between BJP and Congress, there is a danger of Himachal going the way of neighbouring Uttarakhand and backing BJP, with Prime Minister Narendra Modi launching an energetic campaign that relies on his connect with the hill state. Modi and the state government have inaugurated and initiated scores of development projects while promising to protect the state’s cultural character. An even stiffer test looms with Gujarat due for polls in December where the Aam Aadmi Party (AAP) seems more in the news as the opposition to BJP than Congress. Further ahead, the 2024 Lok Sabha polls seem even more daunting.